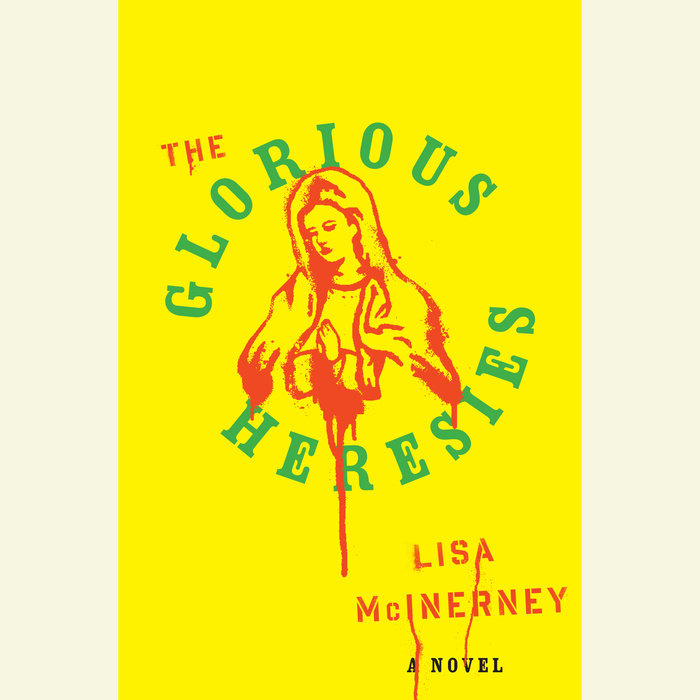 From Lisa McInerney, hailed by The Irish Times as “arguably the most talented writer at work in Ireland today,” comes The Glorious Heresies, a searing debut novel about life on the fringes of Ireland’s post-crash society.
When grandmother Maureen Phelan is surprised in her home by a stranger, she clubs the intruder with a Holy Stone. The consequences of this unplanned murder connect four misfits struggling against their meager circumstances. Ryan is a fifteen-year-old drug dealer desperate not to turn out like his alcoholic father, Tony, whose feud with his next-door neighbor threatens to ruin his family. Georgie is a sex worker who half-heartedly joins a born-again movement to escape her profession and drug habit. And Jimmy Phelan, the most fearsome gangster in the city and Maureen’s estranged son, finds that his mother’s bizarre attempts at redemption threaten his entire organization.
Biting and darkly funny, The Glorious Heresies presents an unforgettable vision of a city plagued by poverty and exploitation, where salvation still awaits in the most unexpected places.

— New York Time's Book Review's "10 Best Crime Novels" of the year
Read More
“Drugs, booze, obscenity, violence and black humor fuel Lisa McInerney’s audacious first novel. . . . The Glorious Heresies is impressive for its moral complexity, and for the energy and virtuosity of its language: a strange, pleasing music that lingers in your mind.” —The New York Times

"A wonderfully offbeat voice. . . . McInerney’s characters aren’t what anyone would call saints, but they’re so richly drawn you have to respect the way they think and sympathize with their moral conflicts." —The New York Times Book Review

“Lisa McInerney’s first novel takes off like a house on fire and doesn’t stop until it has singed the reader’s heart. Love, crime, and cockeyed redemption meet on a hardscrabble housing estate in County Cork, Ireland, in a rare blend of heartbreak and humour. . . . Ms McInerney is a writer to watch.” —The Economist

“McInerney's debut won the 2016 Baileys Prize for Women's Fiction, and you can see why from the first page. Her lively, unexpected prose brings these characters—and the crucible of their surroundings—to life.” —Elle

“The novel’s searing take on contemporary Cork is elegantly leavened by empathy and humor. . . . McInerney’s characters are vibrantly-drawn, richly-rendered, and wonderfully full of surprises.” —The Boston Globe

“Wonderful. . . . What could be a grim tale is lifted by McInerney’s eye for black comedy. . . . I would highly recommend it for the sheer musicality of the language.” —The Paris Review Daily

“A smart and sharp tale of Ireland’s fringe inhabitants, The Glorious Heresies only cements its author's esteemed reputation as one of her nation's most brilliant novelists.” —Refinery29

“The Glorious Heresies is a blisteringly good debut which manifests the true coming of a brilliant new energy in Irish fiction. It's a love story which captures perfectly the feeling of what it is to be young and bowled over by the beauty of another; it's the story of a city, savage and hilarious and coursing deeper and deeper, with every page into that city's dark veins. It's so much more. It's talent, undeniable and aglow.” —Belinda McKeon

“The Glorious Heresies heralds the arrival of a glorious, foul-mouthed, fizzing new talent.” —The Sunday Times

“A spectacular debut . . . Tough and tender, gothic and lyrical, it is a head-spinning, stomach-churning state-of-the-nation novel about a nation falling apart.” —The Telegraph

“This book is a riot . . . McInerney’s sentences are like snowballs rolling down a hill, accumulating jokes and fecks and similes spun from pitch-black humor.” –BOMB

“Here's a writer who's totally and unmistakably the real deal and whose every page pulses with vim and vitality and mad twisty insights and terrific description and with real tenderness, too.” —Kevin Barry

“A gripping and often riotously funny tale . . . McInerney gives us a memorable cast that are tough as nails, savagely articulate, and helplessly human.” —Colin Barrett

“A real stunner; a wild ride of a read” —Donal Ryan

“A punchy, edgy, sexy, fizzing feast of a debut novel from an immensely skilled storyteller with a glorious passion for words. I loved it” —Joseph O’Connor

“A spectacular debut . . . Tough and tender, gothic and lyrical, it is a head-spinning, stomach-churning state-of-the-nation novel about a nation falling apart” —The Telegraph

“McInerney has talent to burn” —The Guardian

“A superb debut from a confident and comic writer.” —Mail on Sunday

“A big, brassy sexy beast of a book.” —The Irish Times

“This is a daring, exuberant and generous novel. And a work to which you will want—eagerly—to return.” —The Observer

“Impressive and imaginative . . . a superb debut from a confident and comic writer with no fear of taking on serious material; McInerney is a new talent to watch out for.” —Irish Mail on Sunday
Read More