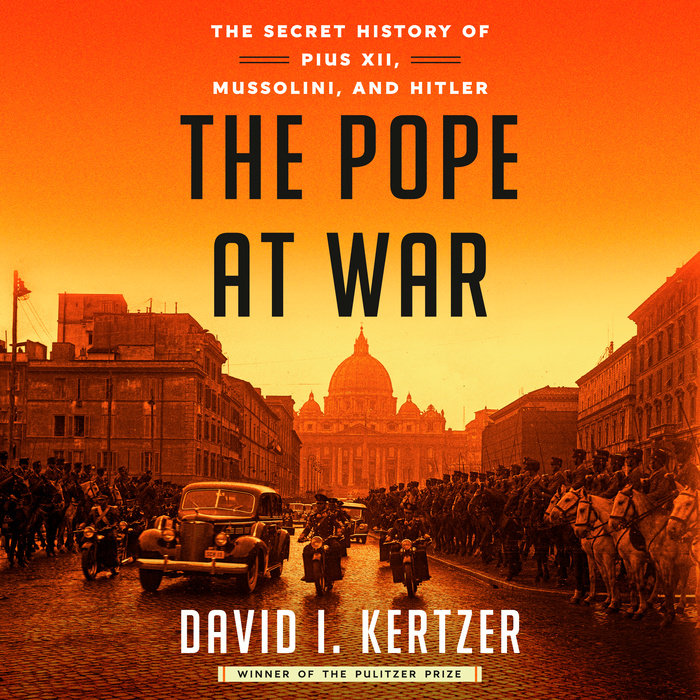 Written by: David I. Kertzer
Read by: Arthur Morey
17 Hours and 33 Minutes Imprint: Random House Audio Genre: History - Wars & Conflicts - World War II - General Release Date: June 07, 2022
INSTANT NEW YORK TIMES BESTSELLER • Based on newly opened Vatican archives, a groundbreaking, explosive, and riveting book about Pope Pius XII and his actions during World War II, including how he responded to the Holocaust, by the Pulitzer Prize–winning author of The Pope and Mussolini

“Splendid . . . The Pope at War ends much of the debate about the pope and surely makes any lingering apologia for his stance implausible.”—Ian Kershaw, author of Hitler: A Biography

When Pope Pius XII died in 1958, his papers were sealed in the Vatican Secret Archives, leaving unanswered questions about what he knew and did during World War II. Those questions have only grown and festered, making Pius XII one of the most controversial popes in Church history, especially now as the Vatican prepares to canonize him.

In 2020, Pius XII’s archives were finally opened, and David I. Kertzer—widely recognized as one of the world’s leading Vatican scholars—has been mining this new material ever since, revealing how the pope came to set aside moral leadership in order to preserve his church’s power.

Based on thousands of never-before-seen documents not only from the Vatican, but from archives in Italy, Germany, France, Britain, and the United States, The Pope at War paints a new, dramatic portrait of what the pope did and did not do as war enveloped the continent and as the Nazis began their systematic mass murder of Europe’s Jews. The book clears away the myths and sheer falsehoods surrounding the pope’s actions from 1939 to 1945, showing why the pope repeatedly bent to the wills of Hitler and Mussolini.

Just as Kertzer’s Pulitzer Prize–winning The Pope and Mussolini became the definitive book on Pope Pius XI and the Fascist regime, The Pope at War is destined to become the most influential account of his successor, Pius XII, and his relations with Mussolini and Hitler. Kertzer shows why no full understanding of the course of World War II is complete without knowledge of the dramatic, behind-the-scenes role played by the pope. “This remarkably researched book is replete with revelations that deserve the adjective ‘explosive,’” says Kevin Madigan, Winn Professor of Ecclesiastical History at Harvard University. “The Pope at War is a masterpiece.”
Read More
“The passing of three-quarters of a century has cleared up almost all the mysteries buried in the rubble of World War II. Among those few that remain, one retains enormous intellectual, emotional, and spiritual power: the role of Pope Pius XII and the Vatican in the rise and fall of Nazi Germany and Fascist Italy and in the destruction of European Jewry in roundups, mass killings, and concentration camps. Now we have the definitive answer.”—The Boston Globe

“David Kertzer has spent decades excavating the Vatican’s hidden history, with his work winning a Pulitzer and capturing Hollywood’s attention. [His] new book examines Pope Pius XII’s role in the Holocaust. . . . It documents the private decision-making that led Pope Pius XII to stay essentially silent about Hitler’s genocide and argues that the pontiff’s impact on the war is underestimated. And not in a good way.”—The New York Times

“Disputes over the role of Pope Pius XII in World War II have been hopelessly mired either in sanctimony or hostility because of gaps in the historical record. With Kertzer’s magnum opus, the book on Pius XII is written, the dispute resolved, the case closed.”—James Carroll, author of Constantine’s Sword

“A thorough exploration of the Vatican archives for the pontificate of Pope Pius XII has long been awaited. David Kertzer’s splendid book now provides it, presenting a plethora of highly unflattering evidence of the pope’s role during the Second World War and his silence regarding the Holocaust. The book ends much of the debate about the pope and surely makes any lingering apologia for his stance implausible.”—Ian Kershaw, author of Hitler: A Biography

“Not many expected the memory of Pope Pius XII’s dealing with Jews during World War II to be sweetened by the recent opening of Vatican Archives from that period. But who could have guessed how sordid the revelations would be? Brace yourself for a story full of horrors.”—Garry Wills, author of Why I Am a Catholic

“David I. Kertzer has outdone himself and crowned his extraordinary career with this volume on Pope Pius XII. This remarkably researched book is replete with revelations that deserve the adjective ‘explosive’ and with so much more. The book is a masterpiece.”—Kevin Madigan, Winn Professor of Ecclesiastical History, Harvard University

“A magisterial new study of how the Vatican navigated World War II and why Pope Pius XII stayed silent in the face of the mass murder of Jews.”—Ruth Ben-Ghiat, professor of history and Italian studies, New York University

“In this rigorous and riveting book, David I. Kertzer uses newly declassified Vatican documents to provide a far fuller portrait of the wartime pope than ever before. Kertzer offers a number of discoveries, including the diplomatic mission of a Nazi prince to the Vatican. The Pope at War is the most authoritative study of Pope Pius XII to date.”—Jonathan Petropoulos, author of Göring’s Man in Paris
Read More 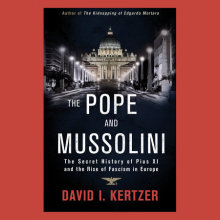