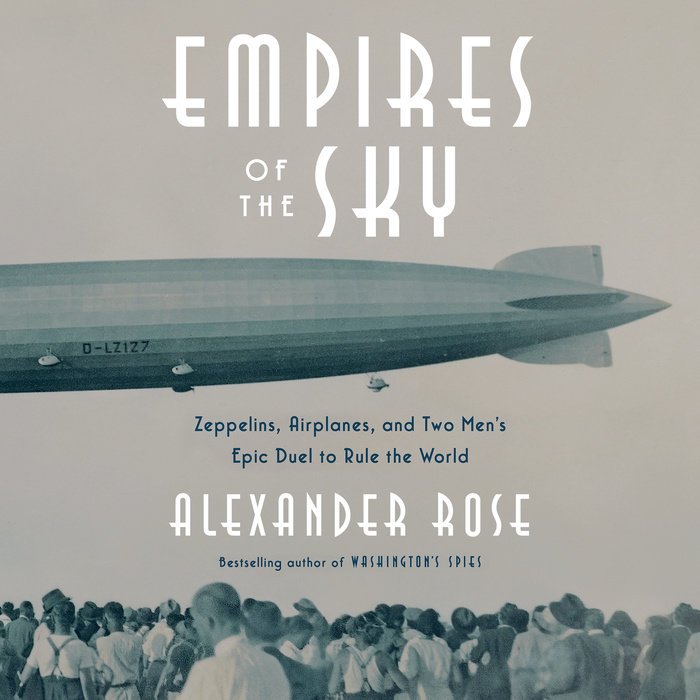 The Golden Age of Aviation is brought to life in this story of the giant Zeppelin airships that once roamed the sky—a story that ended with the fiery destruction of the Hindenburg.

“[An] exhilarating history of the dawn of modern air travel.”—Publishers Weekly

At the dawn of the twentieth century, when human flight was still considered an impossibility, Germany’s Count Ferdinand von Zeppelin vied with the Wright Brothers to build the world’s first successful flying machine. As the Wrights labored to invent the airplane, Zeppelin fathered the remarkable airship, sparking a bitter rivalry between the two types of aircraft and their innovators that would last for decades, in the quest to control one of humanity’s most inspiring achievements.

And it was the airship—not the airplane—that led the way. In the glittery 1920s, the count’s brilliant protégé, Hugo Eckener, achieved undreamed-of feats of daring and skill, including the extraordinary Round-the-World voyage of the Graf Zeppelin.  At a time when America’s airplanes—rickety deathtraps held together by glue, screws, and luck—could barely make it from New York to Washington, D.C., Eckener’s airships serenely traversed oceans without a single crash, fatality, or injury. What Charles Lindbergh almost died doing—crossing the Atlantic in 1927—Eckener had effortlessly accomplished three years before the Spirit of St. Louis even took off.

Even as the Nazis sought to exploit Zeppelins for their own nefarious purposes, Eckener built his masterwork, the behemoth Hindenburg—a marvel of design and engineering. Determined to forge an airline empire under the new flagship, Eckener met his match in Juan Trippe, the ruthlessly ambitious king of Pan American Airways, who believed his fleet of next-generation planes would vanquish Eckener’s coming airship armada.

It was a fight only one man—and one technology—could win. Countering each other’s moves on the global chessboard, each seeking to wrest the advantage from his rival, the struggle for mastery of the air was a clash not only of technologies but of business, diplomacy, politics, personalities, and the two men’s vastly different dreams of the future.

“An obsessive, decades-long struggle between two equally matched people is always fascinating, and especially when the prize they are fighting for is nothing less than the future of flight. We take the airplane’s defeat of the Zeppelin for granted, but in the Roaring Twenties and Dark Thirties it was anything but, and now, in a world aiming for carbon neutrality, we might even regret who won. Alex Rose is a historian with a scintillating prose style and an eye for the insightful, and often amusing, detail. Whereas dirigibles were heavy, ponderous, and full of gas, this book is the precise opposite.”—Andrew Roberts, author of Leadership in War


Praise for Men of War

“Men of War is deeply researched, beautifully written. It is military history at its best.”—The Wall Street Journal

“Fascinating . . . Spies proved to be the tipping point in the summer of 1778. . . . [Alexander] Rose’s book brings to light their crucial help in winning American independence.”—Chicago Tribune