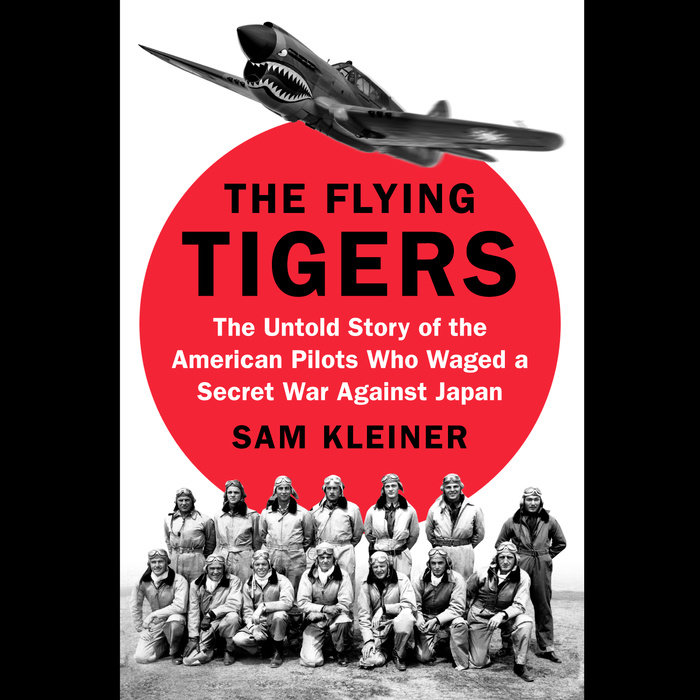 Written by: Sam Kleiner
Read by: Stephen Graybill
9 Hours and 54 Minutes Imprint: Penguin Audio Genre: History - Wars & Conflicts - World War II - General Release Date: May 15, 2018
The thrilling story behind the American pilots who were secretly recruited to defend the nation’s desperate Chinese allies before Pearl Harbor and ended up on the front lines of the war against the Japanese in the Pacific.

Sam Kleiner’s The Flying Tigers uncovers the hidden story of the group of young American men and women who crossed the Pacific before Pearl Harbor to risk their lives defending China. Led by legendary army pilot Claire Chennault, these men left behind an America still at peace in the summer of 1941 using false identities to travel across the Pacific to a run-down airbase in the jungles of Burma. In the wake of the disaster at Pearl Harbor this motley crew was the first group of Americans to take on the Japanese in combat, shooting down hundreds of Japanese aircraft in the skies over Burma, Thailand, and China. At a time when the Allies were being defeated across the globe, the Flying Tigers’ exploits gave hope to Americans and Chinese alike.

Kleiner takes readers into the cockpits of their iconic shark-nosed P-40 planes—one of the most familiar images of the war—as the Tigers perform nail-biting missions against the Japanese. He profiles the outsize personalities involved in the operation, including Chennault, whose aggressive tactics went against the prevailing wisdom of military strategy; Greg “Pappy” Boyington, the man who would become the nation’s most beloved pilot until he was shot down and became a POW; Emma Foster, one of the nurses in the unit who had a passionate romance with a pilot named John Petach; and Madame Chiang Kai-shek herself, who first brought Chennault to China and who would come to visit these young Americans.

A dramatic story of a covert operation whose very existence would have scandalized an isolationist United States, The Flying Tigers is the unforgettable account of a group of Americans whose heroism changed the world, and who cemented an alliance between the United States and China as both nations fought against seemingly insurmountable odds.
Read More
“In the dark days after Pearl Harbor, a swashbuckling band of volunteer pilots gave America something to cheer about with their exploits against the Japanese in far-off China. Through long-lost letters and diaries, Sam Kleiner has brought these gallant warriors to life. The Flying Tigers is a rousing tale that will keep you turning the page.”
—Evan Thomas, New York Times bestselling author of Sea of Thunder

“This is a movie waiting to be made—a great adventure story that is all the more gripping because it really happened. These pilots remind us of why we’re proud to be American, ordinary young men who became heroes at a time when American victories were scarce. Some were killed, leaving their hometowns grieving. Some spent years as prisoners of the Japanese, uncertain whether they’d ever make it home again. All should be remembered. Kleiner is a gifted researcher and storyteller. He does the story of these men justice, and that is saying something.”
—Michael Punke, #1 New York Times bestselling author of The Revenant

“The Flying Tigers is a meticulously researched work of history that reads like a thriller. Packed with characters that come off the pages, it draws the reader into a world of dare-devil flying and covert operations in China in the opening days of World War II. The Flying Tigers marks the debut of an incredibly talented new historian and is a must-read not only for World War II aficionados but for anyone who likes a good story. It is full of them.”
—Amy Chua, Yale Law professor and New York Times bestselling author of Battle Hymn of the Tiger Mother and Political Tribes

“As the United States navigates a complex and challenging relationship with China today, The Flying Tigers offers a vivid reminder that our two countries have pulled together in the past to meet shared threats. Sam Kleiner artfully tells the story of the forgotten World War II alliance, and the role of dynamic individuals in shaping it—and anyone interested in understanding America’s relationship with China should delve into this gripping history.”
—Jake Sullivan, Former National Security Adviser to the Vice President and Director of Policy Planning at the U.S. Department of State

“The Flying Tigers has it all: aerial guerilla warfare, foreign intrigue, inspiring heroism, and a Hollywood-worthy cast of colorful misfits, rebels, and patriotic adventurers, all woven into an electrifying narrative.”
—Thurston Clarke, author of Pearl Harbor Ghosts and The Last Campaign

“Sam Kleiner has bridged a critical gap in American military history with a gripping account of how the Roosevelt administration was secretly leading us into World War II a half-a-year before Pearl Harbor. This is a story with mercenaries, aerial dogfights, love affairs, burning cities and shadow diplomacy but more than that, this tells us how the U.S. got an early jump on its war against Imperial Japan at the beginning of the Pacific Century.”
—Tom Zoellner, author of Uranium

“Kleiner’s meticulous research provides crucial, unexplored background on Claire Chennault and the formation of the American Volunteer Group and lends important context to Roosevelt’s decision to help China before Pearl Harbor pulled the United States into the war. He covers the topic from the operational perspective without becoming mired in tactical details or irrelevant controversies. His is thus the clearest narrative of the group we’ve been given yet and will doubtlessly capture the imagination of a new generation of readers who have not heard this incredible story.”
—Dan Jackson, author of Famine, Sword, and Fire: The Liberation of Southwest China in World War II