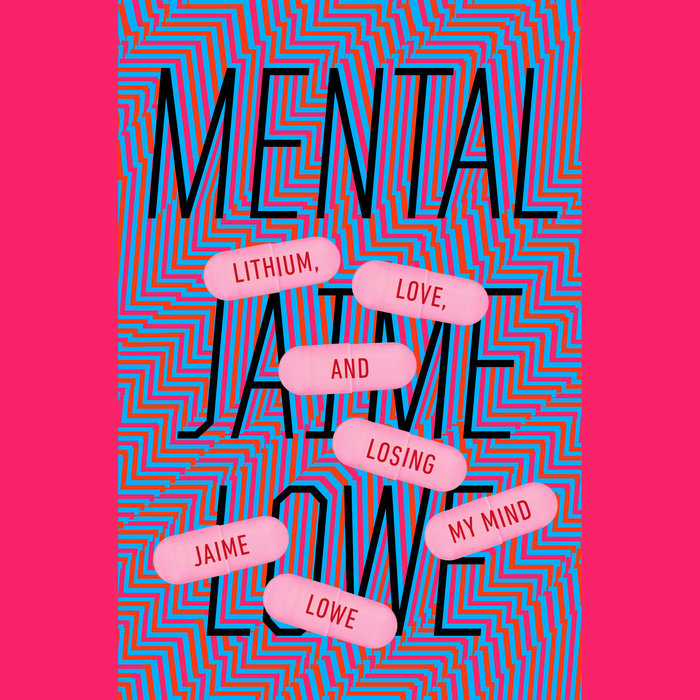 It began in Los Angeles in 1993, when Jaime Lowe was just sixteen. She stopped sleeping and eating, and began to hallucinate—demonically cackling Muppets, faces lurking in windows, Michael Jackson delivering messages from the Neverland Underground. Lowe wrote manifestos and math equations in her diary, and drew infographics on her bedroom wall. Eventu­ally, hospitalized and diagnosed as bipolar, she was prescribed a medication that came in the form of three pink pills—lithium.

In Mental, Lowe shares and investigates her story of episodic madness, as well as the stabil­ity she found while on lithium. She interviews scientists, psychiatrists, and patients to examine how effective lithium really is and how its side effects can be dangerous for long-term users—including Lowe, who after twenty years on the medication suffers from severe kidney damage. Mental is eye-opening and powerful, tackling an illness and drug that has touched millions of lives and yet remains shrouded in social stigma.

Now, while she adjusts to a new drug, her pur­suit of a stable life continues as does her curiosity about the history and science of the mysterious element that shaped the way she sees the world and allowed her decades of sanity. Lowe travels to the Bolivian salt flats that hold more than half of the world’s lithium reserves, rural America where lithium is mined for batteries, and tolithium spas that are still touted as a tonic to cure all ills. With unflinching honesty and humor, Lowe allows a clear-eyed view into her life, and an arresting inquiry into one of mankind’s oldest medical mysteries.
Read More
"Lowe writes with verve and rhythm and willed forthrightness about her endless search for stability and sanity, and about wondering which self—stable or unstable—is the real one, worthy of love." —Jia Tolentino, The New Yorker

“[Mental is] a provocative journey that deepens your understanding of mental illness and what it’s like to depend on just the right pills.” —Annaliese Griffin, Brooklyn Based (Favorite Books 2017)

"I love intense, messy, self-aware stories about humans and all their brokenness and fallibility; I love books that intermittently make me laugh and cry; and most of all, I love when those stories in those books are emotionally written, and make me think about and remember them for days. Jaime Lowe's new memoir of mental illness delivers all of this.... Through it all, there's honesty and steady-handedness, humor and beauty, reflections on, and a coming to terms with, what it means to be vulnerable and different walking around this world." —Jennifer Romolini, Shondaland.com

"A sweeping, expansive survey of the history of bipolar disorder, of psychiatric and pharmaceutical attempts to treat it, and — especially — the history of lithium itself.... Lowe uses all those stats and data points to supplement her account of experiencing her first manic episode in high school, and to document what she sees as the nigh-miraculous power of lithium to return her to herself.... She grapples with questions of identity: Who is she, without the mania? Where does her personality end, and the condition begin? It's heady stuff, but told with a sardonic humor that keeps things grounded.... Mental gazes inward, an exercise in rigorous self-assessment driven by a keen and inquisitive mind." —Glen Weldon, NPR.org

"There are few memoirs about mental illness that are as honest and raw as Jaime Lowe’s Mental.... Lowe’s openness about her disorder is refreshing, and works to end the stigma attached to mental illness." —Evette Dionne, BitchMedia.org

"Part memoir and part investigation, this compelling book will introduce readers into the controversial world of lithium, a medication frequently used to treat bipolar disorder. In this vulnerable memoir, Lowe confronts the manic episodes she suffered in her youth and her journey to accept the negative, long-term effects of the medication that was supposed to save her." —Nora Horvath, Real Simple

"[Jaime Lowe's] often chaotic chronicle operates as an earnest memoir of personal triumph and an illuminating exposé of a type of medication that continues to be a source of great debate. A moving exploration of mental health and the efficacy of available treatment." —Kirkus Reviews

"[A] stunning ... moving, and accessible account of [Jaime Lowe's] episodic madness and lithium-maintained stability that will keep readers engrossed with her often painful, sometimes funny story, whose well-researched information on this age-old malady complements her enlightening journey." —Whitney Scott, Booklist

"From the salt flats of Bolivia to a boxing gym in Brooklyn, the baths of Bad Kissingen, and the harrowing corridors of an adolescent psych ward, Jaime Lowe's Mental is an odyssey in every sense—across the terrain of her own manic episodes and the surprising, varied geographies of possible solutions. With clear-eyed candor, wicked wit, and edgy tenderness, Lowe's story defies the streamlined trajectory of an easy recovery narrative—offering proof that the story of getting better is always more ragged than we imagine." —Leslie Jamison, author of The Empathy Exams

“Mental is brave, honest, disturbing—all that you would expect from a memoir of mental illness. But it gives you something rare and unexpected: writing that is pellucid, forceful, and often beautiful, that sometimes grabs you by the throat and sometimes whispers in your ear, but always moves you. Jaime Lowe is a keen and generous observer who uses her experiences to bear witness for you—not just to bipolar disorder, but to the normal vexations of life.” —Gary Greenberg, author of The Book of Woe

“Mental is a harrowing memoir on the topic of bipolar illness, full of Jaime Lowe’s top-notch reporting. It is also very funny. And if that’s the highest compliment from a comedian; the highest compliment from a fellow person with mental illness is I wish the book had been around twenty-five years ago, so I could have read it.” —Maria Bamford, star and executive producer of Lady Dynamite

“Jaime Lowe’s fiery, poetic prose conveys the rhythms of her mania and the loosening of connections that fuel creativity. In search of an understanding of lithium, she takes us on a personal journey that extends to the outer reaches of primordial stardust. Mental engenders the empathy that helps to erase the stigma, and the blurry line, between mentally ill and sane.” —Julie Holland, MD, author of Moody Bitches and Weekends at Bellevue

“Jaime Lowe's honesty and insight run deep. This book brims with her humanity--you'll root for her on every page--and also with the quality of her thinking and writing. Like Mary Karr and Kay Redfield Jamison, she has taken her own darkest experiences and turned them into art that has the power to heal.” —Emily Bazelon, author of Sticks and Stones
Read More

7 Memoirs on Mental HealthThis Is The Author | Jaime Lowe