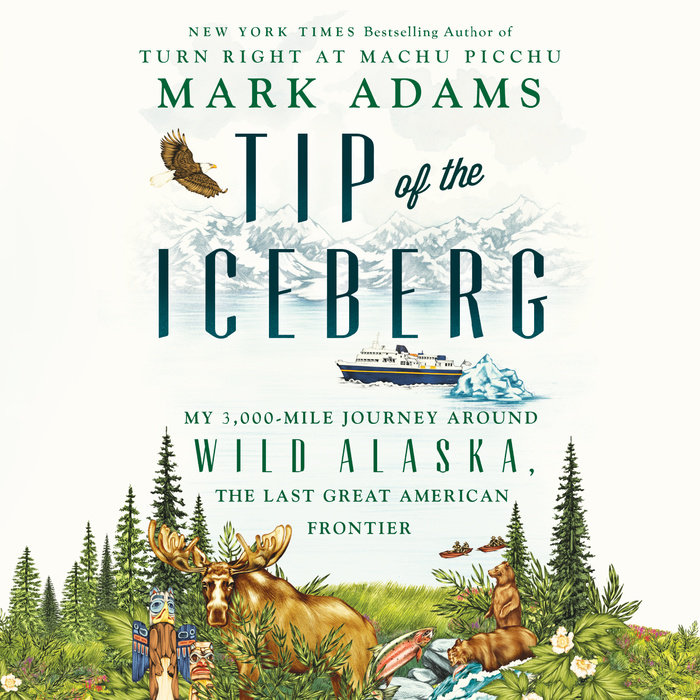 From the acclaimed, bestselling author of Turn Right at Machu Picchu, a fascinating, wild, and wonder-filled journey into Alaska, America's last frontier

In 1899, railroad magnate Edward H. Harriman organized a most unusual summer voyage to the wilds of Alaska: He converted a steamship into a luxury "floating university," populated by some of America's best and brightest scientists and writers, including the anti-capitalist eco-prophet John Muir. Those aboard encountered a land of immeasurable beauty and impending environmental calamity. More than a hundred years later, Alaska is still America's most sublime wilderness, both the lure that draws one million tourists annually on Inside Passage cruises and as a natural resources larder waiting to be raided. As ever, it remains a magnet for weirdos and dreamers.

Armed with Dramamine and an industrial-strength mosquito net, Mark Adams sets out to retrace the 1899 expedition. Traveling town to town by water, Adams ventures three thousand miles north through Wrangell, Juneau, and Glacier Bay, then continues west into the colder and stranger regions of the Aleutians and the Arctic Circle. Along the way, he encounters dozens of unusual characters (and a couple of very hungry bears) and investigates how lessons learned in 1899 might relate to Alaska's current struggles in adapting to the pressures of a changing climate and world.
Read More
“Great nonfiction . . . takes a topic you thought you knew well and makes it new again. . . . [Adams’s] storytelling is guaranteed to make you want to get off your beach towel and book passage somewhere in the great wild north.”
—Outside

“Adams gives readers an eye-opening look at the past and present history of a fascinating region.”
—Publishers Weekly (starred review)

“Adams writes with his signature sense of humor, but shows a real sense of respect for the sometimes odd people who populate the Last Frontier.”
—Los Angeles Times

“[Adams’s] writing illuminates this massive and magical land, and will have you booking your next trip ASAP.”
—Fodor's Travel

"Tip of the Iceberg, with its fresh descriptive writing, strong character development, and presentation of contemporary Alaska within a historical framework, is a valuable contribution to our state's literature. Long-time Alaskans as well as newcomers and visitors will find much to appreciate here.”—Anchorage Daily News

“Armchair travelers, Alaskan history buffs, and anyone who just wants a solid, involving adventure read will relish the 'you are there' atmosphere created through Mark Adams's journeys.”
—Midwest Review of Books

"A pleasing mix of travelogue and history, and the many colorful characters—human and otherwise—keep the pages turning."
—Charleston City Paper

“Tourists will certainly enjoy reading about both the past and the present, and the breezy, self-deprecating tone makes for an obvious vacation diversion.”
—Booklist

“An entertaining and informative trip around Alaska’s coastline.”
—Kirkus Reviews

“Whether you’ve already fallen in love with Alaska, or simply intend to in the future, Tip of the Iceberg was written for you. Mark Adams is an adventurous traveler’s ideal guide to the breathtaking natural history—and colorful human history—of one of America’s most fascinating corners.”
—Susan Casey, author of Voices in the Ocean: A Journey into the Wild and Haunting World of Dolphins

“With Tip of the Iceberg, Mark Adams gave me, in spades, what I always hope to find in a book: the chance to effortlessly learn something extraordinary. I was constantly laughing, shaking my head in astonishment, and trying to slow down so I wouldn’t finish it too fast. Some of my favorite people show up in this book, from John Muir to John Burroughs, but Adams himself may be the most unforgettable character.”
—Candice Millard, author of Hero of the Empire

“Tip of the Iceberg radiates a warmth we don't usually associate with up north. Adams finds nuggets of gold everywhere, and spins a story as expansive as Alaska itself.”
—Sam Kean, author of Caesar’s Last Breath

“The lively, skeptical but open-minded travel writer Mark Adams . . . takes readers along to four plausible sites, without quackery and with a contagious spirit of curiosity, interviewing scores of experts and fanatics, and painting pictures that will make even the most levelheaded traveler yearn to repeat his fantastic itinerary.”
—The New York Times Book Review on Meet Me in Atlantis

“Few mythical places exert a more powerful pull on the imagination than Atlantis, and here the fabled lost city has found its perfect chronicler. Adventurous, inquisitive, and mirthful, Mark Adams gamely sifts through the eons of rumor, science, and lore to find a place that, in the end, seems startlingly real indeed—like a vivid dream surfacing from the weird and murky depths of human consciousness.”
—New York Times bestselling author Hampton Sides on Meet Me in Atlantis

“Always entertaining, Meet Me in Atlantis also introduces a significant amount of Platonic philosophy and devotes generous space to legitimate archaeology like that in Akrotiri. Perhaps the most enjoyable aspect is Adams’s knack for clever descriptions of places and people.”
—The Daily Beast on Meet Me in Atlantis

“A serious (and seriously funny) travelogue, a smart and tightly written history, and an investigative report into perhaps the greatest archaeological discovery in the last century.”
—National Geographic on Turn Right at Machu Picchu

“Adams deftly weaves together Inca history, Bingham's story, and his own less heroic escapade. . . . Those favoring a quirkier retelling [of Bingham's exploits] will relish Mr. Adams's wry, revealing romp through the Andes.”
—The Wall Street Journal on Turn Right at Machu Picchu

“With a healthy sense of humor . . . Adams unearths a fascinating story, transporting his readers back to 1911, when Yale professor Hiram Bingham III hiked the Andes and stumbled upon one of South America's most miraculous and cloistered meccas.”
—NPR.org on Turn Right at Machu Picchu
Read More

This is the Author | Mark Adams