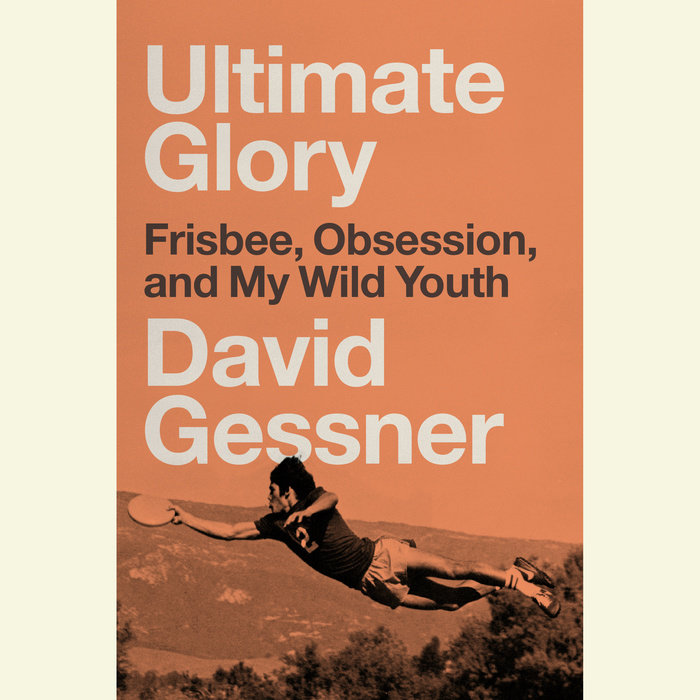 David Gessner devoted his twenties to a cultish sport called Ultimate Frisbee. Like his teammates and rivals, he trained for countless hours, sacrificing his body and potential career for a chance at fleeting glory without fortune or fame. His only goal: to win Nationals and go down in Ultimate history as one of the greatest athletes no one has ever heard of.

With humor and raw honesty, Gessner explores what it means to devote one’s life to something that many consider ridiculous. Today, Ultimate is played by millions, but in the 1980s, it was an obscure sport with a (mostly) undeserved stoner reputation. Its early heroes were as scrappy as the sport they loved, driven by fierce competition, intense rivalries, epic parties, and the noble ideals of the Spirit of the Game.

Ultimate Glory is a portrait of the artist as a young ruffian. Gessner shares the field and his seemingly insane obsession with a cast of closely knit, larger-than-life characters. As his sport grows up, so does he, and eventually he gives up chasing flying discs to pursue a career as a writer. But he never forgets his love for this misunderstood sport and the rare sense of purpose he attained as a member of its priesthood.
Read More
"[A] lively and honest coming-of-age story. . . . An exploration of the questing desires of the young heart, Ultimate Glory should be recommended reading for every college student. A 20-something, unsure whether to listen to the yearnings of the soul, might find answers in Gessner’s chase of a flying plastic disc." ---The Washington Post

"A moving memoir [that] celebrates the human ‘ability to get obsessed’—in this case, with Frisbee." ---The Wall Street Journal

“The history of Ultimate Frisbee had not yet been written by one who was there, there for the ugly, early, drunken days when men first turned to themselves and one another and asked whether a modified form of football could be played using flying discs, and answered, ‘Yes!,’ or didn't answer, just started playing it, running and drinking and diving. Gessner has come for the game that made him great. Read it.” —John Jeremiah Sullivan, author of Pulphead

“An important contribution to the history of Ultimate—not a 'hippie-dippie' activity but an exciting sport requiring tremendous athleticism worthy of respect.” —Booklist

“Gessner’s enthusiasm is unmistakable, and there’s much to commend the story as a case in point of how a kid, once finding his or her métier, can make of a pastime a life-transforming experience.” —Kirkus Reviews

“Gessner reflects with honesty and humor on his dedication to the sport of Ultimate Frisbee. . . [He] remains entertainingly unrepentant about a decade spent in the throes of a game that itself was evolving beyond its carefree image. Gessner nicely captures the persistent pursuit of greatness in the face of doubt and failure.” —Publishers Weekly

“In Ultimate Glory, Gessner flings out not only a requiem and a eulogy to a golden era of beginnings that has since passed, but also offers up a trumpet blast in celebration of a game that has somehow remained, against all odds and despite the tendency of almost everything else, uncorrupted by its success and untainted by its mainstream adoption while continuing to offer up a fierce and shining testament to the spirits of those, like Gessner, who gave the better parts of their youth over to its glory.” —Kevin Fedarko, author of The Emerald Mile

“Ultimate Glory is a book of wild youth, of derring-do . . . it lifts us up into glory’s heights. Gessner is a compelling guide to the scenes of ancient battles, knows where all the blood has been spilled, knows a thing or two about greatness and how it fades, but in that, too, there is glory, and this is a book to lift us up into glory’s heights. Funny, fraught, deep, fascinating, so much more than you thought: finally the game of Ultimate has its Jim Bouton, its George Plimpton, its Bill Bradley.” —Bill Roorbach, author of Life Among Giants

“In Ultimate Glory, David Gessner lets loose a barbaric yawp, akin to Whitman’s in Song of Myself: 'I was the man, I suffered, I was there.' Read it for all the hucks and layouts, for the epic battles between Hostages and Rude Boys, and for its fascinating history of the sport. But even more, read it to hear one of America's most gifted writers sing an unabashed love song to the glory of being alive.” —Patrick Phillips, author of Blood at the Root

“Even if I watched him play, I wouldn't be able to tell you if David Gessner is any good at Ultimate Frisbee. But the man can write, and this homage to his oddball sport is rich with life's joys, sorrows and universal truths.” —Dan Shaughnessy, New York Times-bestselling co-author of Francona

Praise for David Gessner and All the Wild that Remains:

“Gessner [has a] wacky sense of humor and rigorous mind. . . . [He] proves to be an amiable guide, an aging, beer-loving jock. . . . But Gessner also digs deep.” —Los Angeles Review of Books

“[An] artful combination of nature writing, biography, literary criticism, and cultural history . . . Like the best works of Stegner and Abbey, Gessner’s book sands away the varnish of legend that casts the West in the unlikely role of American Eden.” —The Christian Science Monitor
Read More

This Is The Author | David Gessner