home
x
Subscribe
- Penguin Audio -
Written By: Deborah Harkness
Read By: Saskia Maarleveld
25
Unabridged Download
-9780525529491 -
*Manufacturerâ€™s Suggested Retail Price. See retailer for details.
The World of All Souls
The Complete Guide to A Discovery of Witches, Shadow of Night, and The Book of Life 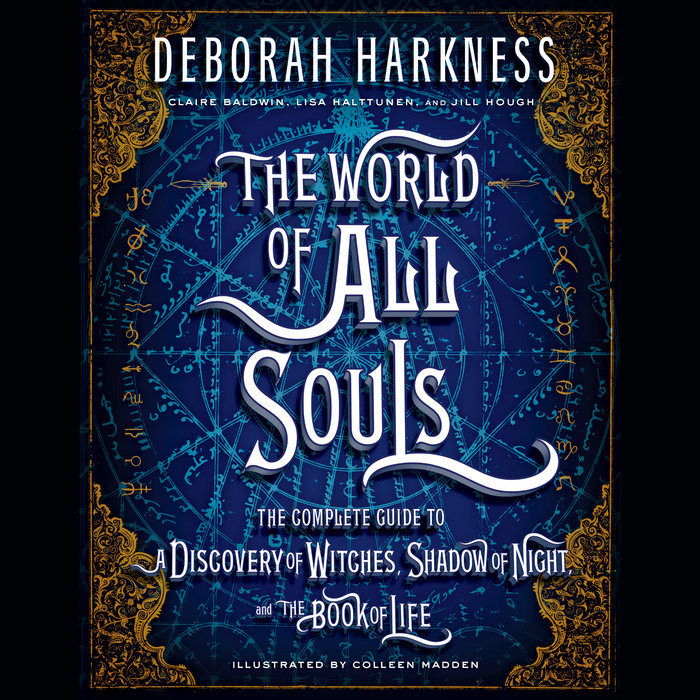 A Discovery of Witches introduced Diana Bishop, Oxford scholar and reluctant witch, and vampire geneticist Matthew Clairmont. Shadow of Night and The Book of Life carried Deborah Harkness's series to its spellbinding conclusion.

In The World of All Souls, Harkness shares the rich sources of inspiration behind her bewitching novels. She draws together synopses, character bios, maps, recipes, and even the science behind creatures, magic, and alchemy--all with her signature historian's touch. Bursting with fascinating facts and dazzling artwork, this essential handbook is a must-have for longtime fans and eager newcomers alike.

*Includes a Bonus PDF including recipes, images, translations, and more.
Read More
Praise for Deborah Harkness and the All Souls Trilogy

“Packed with gorgeous historical detail and a gutsy, brainy heroine to match . . . Harkness writes with thrilling gusto about the magical world.” —Entertainment Weekly

“Wonderfully imaginative grown-up fantasy with all the magic of Harry Potter or Twilight . . . An irresistible tale of wizardry, science, and forbidden love.” —People

“Romantic, erudite, and suspenseful . . . Harkness attends to every scholarly and emotional detail with whimsy, sensuality, and humor.” —O, The Oprah Magazine

“Enchanting, engrossing, and impossible to put down.” —Miami Herald

“A big supernatural canvas . . . ranging across history and zeroing in on DNA, human and otherworldly. Age-old tensions between science and magic and between evolution and alchemy erupt as Diana seeks to unlock the secrets of Ashmole 782.” —Los Angeles Times

“The charm in Deborah Harkness’s wildly successful All Souls trilogy lies not merely in the spells that its creature characters cast, but in the adroit way she has insinuated her world of daemons, witches, and vampires into ours. . . . Harkness casts her own indelible spell of enchantment, heartbreak, and resilience.” —The Boston Globe

“Deborah Harkness takes us places we’ve never been before. . . . Lucky for us.” —USA Today