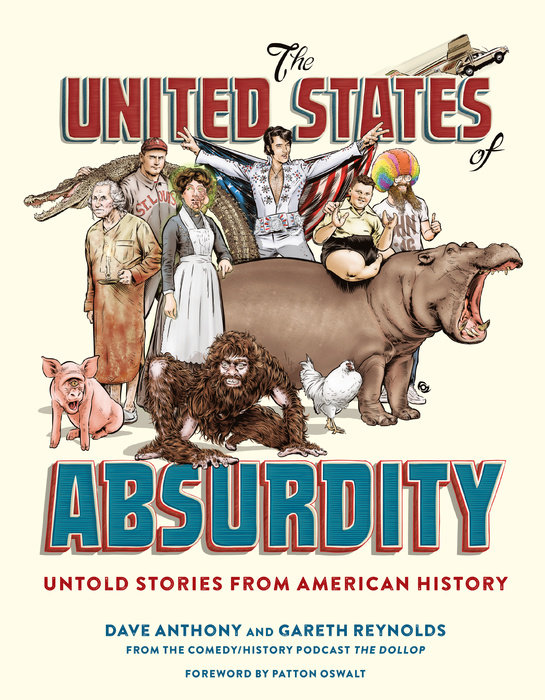 The United States of Absurdity presents short, informative, and hilarious stories of the most outlandish (but true) people, events, and more from United States history. Comedians Dave Anthony and Gareth Reynolds cover the weird stories you didn't learn in history class, such as 10-Cent Beer Night, the Jackson Cheese, and the Kentucky Meat Shower, accompanied by full-page illustrations that bring each historical "milestone" to life in full-color.

Read More
"The United States of Absurdity, a new book from the hosts of the American history podcast The Dollop, couldn't have picked a better time to arrive. Think of it as A People's History of the United States for the slightly lazy."
—NPR.org

"If my history teachers in high school had been half as smart and one-tenth as entertaining as Dave and Gareth, I could probably tell you who fought in the Spanish-American War today.”
—Josh Olson, Oscar-nominated screenwriter for A History of Violence

“This book, just like The Dollop, will teach you things you'll wish you had learned in history class. I dare you not to be equal parts fascinated, horrified, and in stitches.”
—Al Madrigal, actor and comedian, The Daily Show

"Dave and Gareth have created an amazing record of historical eccentricities which, while hysterically informative, has thus far only been available for your ears. This book will take The Dollop into the uncharted territory of your eyes. And hopefully, if my many requests are heeded—there will be a scented version."
—Chris Hardwick, @midnight and Talking Dead

"The United States of Absurdity is so funny that it makes me want to kidnap Dave and Gareth, keep them in a basement, and then live out their identities as my own…which would still not be the weirdest story in this book."
—Wil Anderson, stand-up comedian, television host, writer, and podcaster

“Dave Anthony and Gareth Reynolds could make anything funny. This book is proof. Good thing they decided to use their powers for good to educate the masses with the lessons we can learn from history. Even the parts of history that make us vomit in our mouths a little.”
—Ronny Chieng, stand-up comedian and correspondent on The Daily Show with Trevor Noah
Read More

Stay Entertained While You Grill