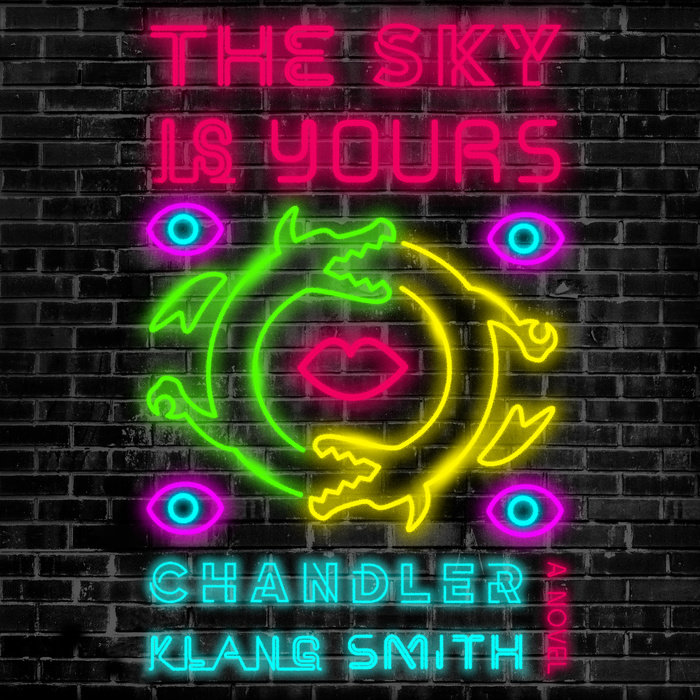 “Influenced by the likes of Jane Austen and Rick and Morty, Smith tackles timely issues while leaving room for some delicious reality TV references.”—Entertainment Weekly

In the burned-out, futuristic city of Empire Island, three young people navigate a crumbling metropolis constantly under threat from a pair of dragons that circle the skies. When violence strikes, reality star Duncan Humphrey Ripple V, the spoiled scion of the metropolis’ last dynasty; Baroness Swan Lenore Dahlberg, his tempestuous, death-obsessed betrothed; and Abby, a feral beauty he discovered tossed out with the trash, are forced to flee everything they've ever known. As they wander toward the scalded heart of the city, they face fire, conspiracy, mayhem, unholy drugs, dragon-worshippers, and the monsters lurking inside themselves.

In this bombshell of a novel, Chandler Klang Smith has imagined an unimaginable world: scathingly clever and gorgeously strange, The Sky Is Yours is at once faraway and disturbingly familiar, its singular chaos grounded in the universal realities of love, family, and the deeply human desire to survive at all costs.

Praise for The Sky is Yours

“It’s a mesmeric world, comic in the way teenage voyages of self-discovery inevitably are, but with an undertone of menace, horror, even hints of allegory. Satire, too . . . Smith’s imagination is inexhaustible. The Sky Is Yours is a great and disturbing debut, which colonizes a new realm of the magic city.”—The Wall Street Journal

“Smith’s gifts of imagination are staggering. . . . Much like Lev Grossman’s The Magicians and Charlie Jane Anders’s All the Birds in the Sky before it, The Sky is Yours filters youth through a warped yet poignantly canny speculative fiction lens. At the same time, it’s funny as hell, full of madcap detail, firecracker dialogue, and a healthy dose of absurdism in the face of darkness.”—NPR

“Readers who love ambitious literary genre fiction should be on the lookout for Smith’s first novel, a vibrantly uncanny dystopia set on an island metropolis, in the shadow of dragons that swoop overhead, where income inequality and mass incarceration have spun out of control.”—HuffPost

“An unmissable masterpiece.”—PopSugar
Read More
“There have been a lot of books heralded as heirs to Infinite Jest, but I can happily say: this is it. . . . Chandler Klang Smith has unleashed her own slipstream, genrefluid monster of a book—that also happens to be fun, visceral, heartbreaking, and genuinely funny. The Sky Is Yours is bursting with ideas and characters. . . . [It] may be a rollicking adventure, but it also has a bracing, honest heart.”—Tordotcom

“To say that Smith’s debut is delightful is selling it short. I mean, it is delightful: you can feel an ebullient energy bouncing through the words and the story. It’s weird and it’s creative and it is full of heart. . . . In so many ways, The Sky Is Yours should be a glorious mess, given all that this writer is doing. But while it is glorious, it isn’t a mess. It is warm and violent and strange and comforting in equal measure, without ever falling apart.”—Locus

“The Sky Is Yours, the brilliantly colorful new novel by Chandler Klang Smith . . . recalls the surreal weirdness of Jeff VanderMeer’s City of Saints and Madmen or China Miéville’s Perdido Street Station, but the oddball intensity of its kaleidoscopic plot gives the novel a distinctive flavor all its own.”—Wired

“Smith’s The Sky Is Yours is a blockbuster of major label debuts. The dystopic inventiveness of this genre hybrid sci-fi thriller/coming-of-age tale/adventure novel has garnered comparisons to Gary Shteyngart, David Mitchell, and Ridley Scott’s Blade Runner. And did I mention? It has dragons, too.”—The Millions

“The Sky Is Yours is one of those enthusiastic and daring books that heralds a talent who cannot be contained by conventional means. . . . As strange as it may seem for a novel that audaciously shoehorns Jane Austen into the pilot’s seat right next to Batman, Klang Smith has a plan, and she sticks to it with a fierce dedication. . . . All that everything, it turns out, is there for a reason.”—The Seattle Review of Books

“Chandler Klang Smith comes roaring out the gate with a raucous, inventive gem of a debut. Science fiction, coming-of-age, and adventure novel, The Sky Is Yours blends its genres brilliantly. To top it all off the book is funny as hell.”—Victor LaValle, author of The Ballad of Black Tom and The Changeling

“[Smith’s] dystopian dragon-opus . . . is a marvel: a smart, ribald, and relentlessly imaginative tale about three troubled teens making their way through a fallen world of psychotropic chewing tobacco dealers, monster cults, and yup, you guessed it, big-ass dragons. . . . I privately like to think of it as a soupçon of the moviesReign of Fire and Brazil, and the novels Station Eleven by Emily St. John Mandel and We Have Always Lived in the Castle by Shirley Jackson.”—Electric Literature

“In The Sky Is Yours Smith has invented the language she needs to tell her story. This is a book that invents itself.”—LitHub
Read More