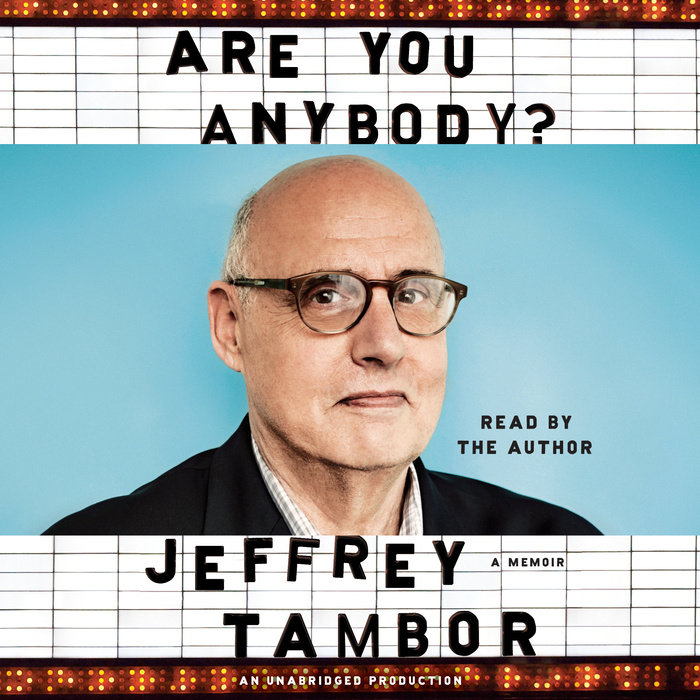 Written by: Jeffrey Tambor
Read by: Jeffrey Tambor
7 Hours and 39 Minutes Imprint: Random House Audio Genre: Biography & Autobiography - Personal Memoirs Release Date: May 16, 2017
You know him from his breakout role as Hank Kingsley on The Larry Sanders Show, his outrageous turn as George and Oscar Bluth on Arrested Development, and his Emmy Award-winning performance as Maura Pfefferman on Transparent. A Broadway star, a television legend, an accomplished screen actor whose singular wit and heartrending performances have been entertaining audiences for more than four decades, but the question remains: Who the hell is Jeffrey Tambor?

In his illuminating, often hilarious, and always honest memoir, Tambor looks back at the key moments in his life that taught him about creativity and play and pain and fear. The son of what you might call "eccentric" Russian and Hungarian Jewish parents, Tambor grew up in San Francisco a husy kid with a lisp, who suffered in his "otherness" and found salvation in the theater.

While he learned his art from the best of the best—Al Pacino, George C. Scott, Garry Shandling, Mitch Hurwitz, Jill Soloway—he also introduces his many unexpected teachers, from the nameless man in a Detroit bookstore who gave him the love of reading, to his young children who (at this ridiculously late stage in his life) have reintroduced him to play, bravery, and the simple joy of not giving a shit.

Tambor shares the triumph of landing his first Broadway role, but not before experiencing the humbling that is commercial work (and how even saying "my socks don't cling" can prove a challenge). He invites you behind the scenes of his wildly successful television shows, but he doesn't leave out the pit stops he made at addiction, Scientology, and what it feels like to get fourth billing after Sylvia the Seal on The Love Boat.

At last, Tambor answers the question "Are you anybody?" with a promise that success doesn't mean perfection and failure most definitely is an option.
Read More
“What a great book and fun read! Jeffrey Tambor is able to distill every character and nuance of his journey right down to the telling detail of truth. His never-ending fight to kill expectancy in life and work is downright inspiring.” —Michael Connelly, author of The Wrong Side of Goodbye

"Jeffrey Tambor is one of those unique voices that everyone who seeks to achieve that elusive Goldilocks Zone between comedic Terpsichore and dramatic honesty looks to as a mentor. To read his memoir is to be gifted a glimpse into the inner workings of a theatrical genius. Read it front to back and thank me later." —Seth MacFarlane

"This is unlike any other memoir you will ever read. It’s a story filled with life and life lessons, acting and show business drama, anecdotes of parents and children, friends and teachers. By use of narrative the master teacher comes searing out in words that are heartbreakingly poignant one moment and hysterically funny the next. He maintains an unrelenting honesty while revealing his infinite humanity.

Working with Jeffrey Tambor over so many years, I know well his one-of-a-kind brilliance as actor and teacher—now I know this same intelligence translates flawlessly into his writing. Why am I not surprised.” —Judith Light

"Jeffrey Tambor always makes me cry. And now it turns out that he is as brilliant a writer as he is an actor. The stories he spins through the rocky roads of family, career, parenthood and Hollywood are told with unparalleled charm and chutzpah. ARE YOU ANYBODY? is as hilarious as it is fearless, a tremendously touching memoir that reveals Tambor's tender artist's heart. It's monumentally honest, incredibly juicy, and so much fun to read." —Jill Soloway

"In life, on screen, and now in this illuminating memoir, Jeffrey Tambor has a stubborn incapacity for bullshit. I personally smell better and shine brighter as a result of his friendship and brave storytelling. Attaboy, Jeffrey!" —Jay Duplass

“I learned so much about my beloved friend reading this delightfully uproarious memoir. Jeffrey Tambor is a naughty, hilarious, and wise raconteur. The trans community has not seen a more dedicated and determined ally than Mr. Tambor, who has steadily used his platform to speak to our movement’s shared goals, both on and off camera. The thing that has catalyzed the trans revolution is not our fierce perseverance, vocal resistance, or increasing visibility, but the arrival of powerful allies willing to hear our stories and fight alongside us for our rights. They say you can only understand a person’s experience by walking in their shoes, and Mr. Tambor has been marching in the shoes of transness for four years and counting.” —Zackary Drucker

“Entertainment enthusiasts, readers interested in the history of TV, and, naturally, the many fans of Tambor’s work will find much to delight in here.” —Kristine Huntley, Booklist

"An insightful meditation on adversity and how it intrinsically shapes us all, this essential read will have broad appeal." —Jessica Bushore, Library Journal
Read More

This Is The Author | Jeffrey Tambor