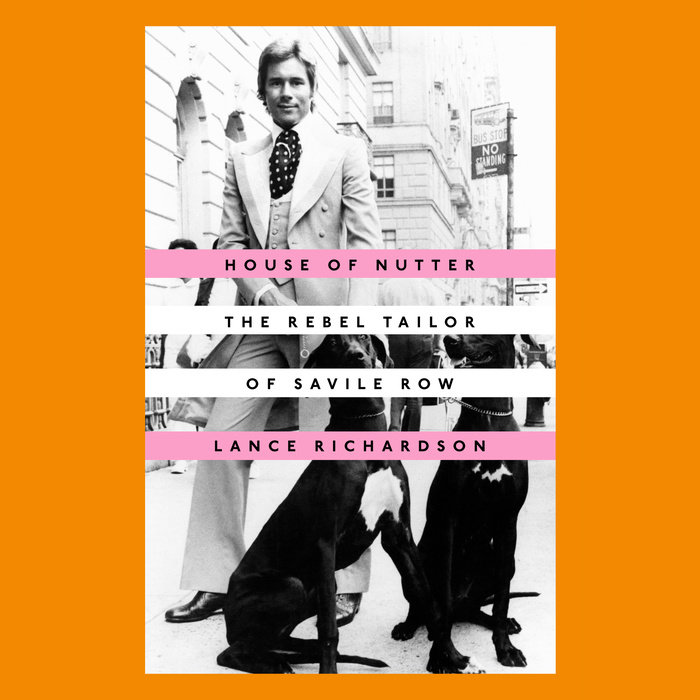 The strange, illuminative true story of Tommy Nutter, the Savile Row tailor who changed the silhouette of men’s fashion—and his rock photographer brother, David, who captured it all on film.

From an early age, there was something different about Tommy and David Nutter. Growing up in an austere apartment above a café catering to truck drivers, both boys seemed destined to lead rather humble lives in post-war London—Tommy as a civil servant, David as a darkroom technician. Yet the strength of their imagination (plus a little help from their friends) transformed them instead into unlikely protagonists of a swinging cultural revolution.

In 1969, at the age of twenty-six, Tommy opened an unusual new boutique on the “golden mile” of bespoke tailoring, Savile Row. While shocking a haughty establishment resistant to change, “Nutters of Savile Row” became an immediate sensation among the young, rich, and beautiful, beguiling everyone from Bianca Jagger to the Beatles—who immortalized Tommy’s designs on the album cover of Abbey Road. Meanwhile, David’s innate talent with a camera vaulted him across the Atlantic to New York City, where he found himself in a parallel constellation of stars (Yoko Ono, Elton John) who enjoyed his dry wit almost as much as his photography.

House of Nutter tells the stunning true story of two gay men who influenced some of the most iconic styles and pop images of the twentieth century. Drawing on interviews with more than seventy people—and taking advantage of unparalleled access to never-before-seen pictures, letters, sketches, and diaries—journalist Lance Richardson presents a dual portrait of brothers improvising their way through five decades of extraordinary events, their personal struggles playing out against vivid backdrops of the Blitz, an obscenity trial, the birth of disco, and the devastation of the AIDS crisis.

A propulsive, deftly plotted narrative filled with surprising details and near-operatic twists, House of Nutter takes readers on a wild ride into the minds and times of two brilliant dreamers.
Read More
"David is gay, as was Tommy, and Richardson susses out their story lovingly, and with great panache. With all the ink that's been spilled on Beatlemania, Studio 54, sixties counterculture, and the rest, it's remarkable to find a new story to tell, with characters who were there all along, as if waiting for someone to notice." —The New Yorker

“[Nutter’s] journey is recounted in captivating detail ... Subtitled The Rebel Tailor of Savile Row, the book is an engaging analysis of the British class system and the fashion industry, gay liberation and the Aids crisis, which plays out like a binge-worthy Netflix series.” —Financial Times

"Vivid and tragic." —The Spectator

“[S]plendidly readable ... House of Nutter, Richardson’s first book, is a fine match of author and subject. He writes with flair and erudition...it’s hard to find fault with this thoroughly enjoyable glimpse into high fashion and low life.” —The Observer

"Richardson’s telling of the story of the Nutter brothers’ journeys from humble beginnings to the sex, drugs, and rock and roll escapades of the 1970s and 1980s features a remarkable cast of characters and intriguing photographs, including the iconic album cover of Abbey Road, on which three of the Beatles wear Nutter suits….Richardson’s social history of the fashion and music scenes in two resonant twentieth-century decades in London and New York is astute and fascinating." —Booklist

"Richardson’s affection for his subjects is touching … [H]is enthusiasm is contagious." —Publisher's Weekly

"Reads with all the seamless splendour of a beautiful bespoke suit. Enchanting, irreverent and entertaining." —attitude

"House of Nutter is a tale that is quintessential of its era, told by a biographer who combines pace and exhaustiveness." —Anna Murphy, The Times

“Through the lens of fashion, Lance Richardson superbly chronicles the greatest societal and cultural upheaval of the last century. House of Nutter potently underscores the inextricable relationship between the world we live in and the clothes we wear. I couldn’t put it down.” —Tim Gunn, author of The Natty Professor and Gunn’s Golden Rules

“Tommy Nutter, the Rebel Tailor of Savile Row, dressed the Beatles and Elton John. Cheeky, aloof, camp, Nutter was drawn to glamour like a moth to a flame. Lance Richardson has restored his fame and gripping story in all its detail and pathos. Great social history—which means, superior international gossip about the seventies and eighties.” —Edmund White, author of Our Young Man and A Boy’s Own Story

“In the fabulous Nutter brothers, Lance Richardson has found a magical wormhole to Swinging London, Beatlemania, and Studio 54—destinations of the mind that feel both familiar and, through Tommy and David’s eyes, sparklingly new. An effervescent tale, told with the pizzazz of a checked suit, perfectly tailored.” —Michael Schulman, author of Her Again: Becoming Meryl Streep

“An enjoyable and absorbing read about sartorial rigor and queer life that also happens to be a moving social history of mid-century London and New York.” —Adam Haslett, author of Imagine Me Gone

“Tommy Nutter brought decadent glamour to stuffy Savile Row, giving it a wicked and much-needed kick up the bum. Lance Richardson tells the tale of Tommy’s rise and fall with meticulous detail and great panache.” —Simon Doonan, author of Saturday Night Fever Pitch: The Madness and Magic of Footballer Style

“Tommy and David Nutter, both driven creative artists, led fast-paced lives that were emblematic of their times. This vivid and enthralling book perfectly captures their relentless spirits and the carefree, high-flying days of the ‘60s and beyond.” —Fred Hersch, author of Good Things Happen Slowly: A Life In and Out of Jazz

“Tommy and David Nutter were gay British brothers whose lives intersected with everyone from the Beatles, Mick Jagger, and Cilla Black to Steve Rubell and Elton John, just as the gay revolution was beginning to explode on both sides of the Atlantic. Lance Richardson’s astute portraits of Swinging London in the ‘60's and swaggering Manhattan in the ‘70's blend backstage gossip with compelling social history. The result is an irresistible narrative.” —Charles Kaiser, author of The Gay Metropolis

“In House of Nutter, Lance Richardson brings back Tommy in all his cheeky, sexy, wicked glory.” —Simon Callow