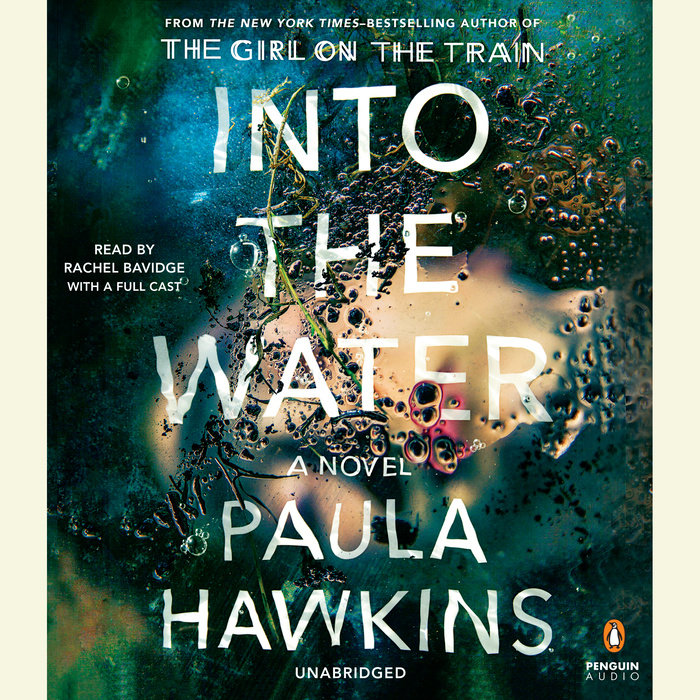 The author of the #1 New York Times bestseller and global phenomenon The Girl on the Train returns with Into the Water, her addictive new novel of psychological suspense.

A single mother turns up dead at the bottom of the river that runs through town. Earlier in the summer, a vulnerable teenage girl met the same fate. They are not the first women lost to these dark waters, but their deaths disturb the river and its history, dredging up secrets long submerged.

Left behind is a lonely fifteen-year-old girl. Parentless and friendless, she now finds herself in the care of her mother's sister, a fearful stranger who has been dragged back to the place she deliberately ran from—a place to which she vowed she'd never return.

With the same propulsive writing and acute understanding of human instincts that captivated millions of readers around the world in her explosive debut thriller, The Girl on the Train, Paula Hawkins delivers an urgent, twisting, deeply satisfying read that hinges on the deceptiveness of emotion and memory, as well as the devastating ways that the past can reach a long arm into the present.

Beware a calm surface—you never know what lies beneath.

“Highly suspenseful… all these intrigues are teased out with impressive skill by Ms. Hawkins, who tells a complex narrative... in a chronicle whose final pages yield startling revelations." —The Wall Street Journal

"[A] succulent new mystery… Hawkins, influenced by Hitchcock, has a cinematic eye and an ear for eerie, evocative language… So do dive in. The payoff is a socko ending. And a noirish beach read that might make you think twice about dipping a toe in those dark, chilly waters.”—USA Today

“Addicting… this novel has a little something for anyone looking for their next binge-read.” —Marie Claire

"Thrilling... we [are] kept guessing until the sobering conclusion." —O Magazine

"Mother's Day is coming up. This one's perfect for the mom who always has shelf space for thrillers." —theSkimm

“Hawkins is at the forefront of a group of female authors – think Gillian Flynn and Megan Abbott – who have reinvigorated the literary suspense novel by tapping a rich vein of psychological menace and social unease… there’s a certain solace to a dark escape, in the promise of submerged truths coming to light.” —Vogue

"Contains just as many hair-raising plot twists as [The Girl on the Train]. This time, Hawkins’s absorbing and chilling cast of mothers, daughters, and sisters grapples with the implications of memory, exploring what happens when our conflicting recollections of personal histories collide to destroy the present.” —Harper's Bazaar

“Readers will be locked in a guessing game until the unnerving conclusion… It’ll give you the most thrills and chills.” —Redbook

“Page-turner… a thriller that intersects complicated cultural narratives of adolescent sexuality, the often fraught relationships between daughters, mothers and sisters, and the relationship between ‘good men’ and ‘troublesome women.’”—Jezebel

“Hawkins has a real gift for exploring the manner in which we constantly turn things over in our minds, crafting inner monologues both rich and relatable… a lively, compelling, and surprisingly empathetic and humane page-turner.” —The A.V. Club

“Sometimes what we really need is a good thriller. And Paula Hawkins knows how to captivate readers with an enthralling and suspenseful mystery. Following her psychological thriller, The Girl on the Train, Paula Hawkins is at it again with Into the Water.” –Mic

"A page-turning thriller… Will haunt you long after this book is over.” —Bustle

“Hawkins constructs a bracing, knotty ride in which the ghosts of the past come back to haunt those living in the present.” –W Magazine

“Hawkins keeps you guessing until the final page.” —Real Simple

“Arresting… Hawkins is an ambitious writer, inclining to the literary end of the spectrum.”—Financial Times

“Into the Water" captures all the suspense and terrifying emotions of [The Girl on the Train], but it beams with a maturity in writing and in storytelling that will draw her fans right back over the edge... the novel also flows with an instinctual understanding of relationships, young love, devoted friendships and dedication to duty, familial faults and small-town paranoia." —Minneapolis Star-Tribune

“When it comes to tension you could cut with a knife, no one does it better than Hawkins.”—New York Post

“An elegantly written tale that grips readers like a mighty current, guiding and taking them downriver toward the inevitable rocky ending and breathtaking plot twist in the novel’s final pages.” —Deseret News

“Hawkins is a master of waging emotional warfare among her characters against a backdrop of murder. Into the Water is one to read with the lights on.”—SF Weekly

“Hawkins returns to the rotating-narration style of her breakout debut, giving voice to an even broader cast this time… Order by the ton.” —Booklist (starred review)

“Twisty and compulsive… Hawkins skillfully delves into the psyche of each character, extracting their feelings, fears and fallacies, slowly ramping up the psychological suspense as she goes.” —BookPage