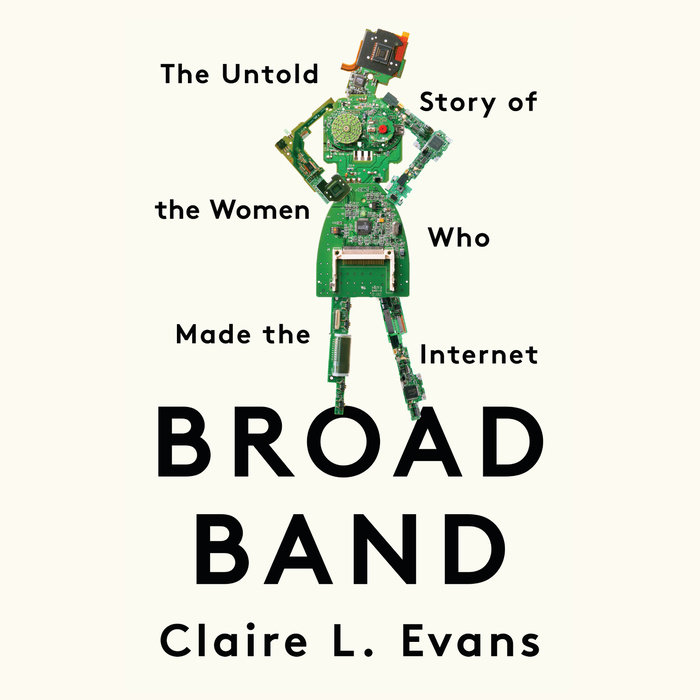 Written by: Claire L. Evans
Read by: Claire L. Evans
9 Hours and 1 Minutes Imprint: Penguin Audio Genre: Biography & Autobiography - Women Release Date: March 06, 2018
If you loved Hidden Figures or The Rise of the Rocket Girls, you'll love Claire Evans' breakthrough book on the women who brought you the internet--written out of history, until now.

"This is a radically important, timely work," says Miranda July, filmmaker and author of The First Bad Man. The history of technology you probably know is one of men and machines, garages and riches, alpha nerds and brogrammers--but from Ada Lovelace, who wrote the first computer program in the Victorian Age, to the cyberpunk Web designers of the 1990s, female visionaries have always been at the vanguard of technology and innovation.

In fact, women turn up at the very beginning of every important wave in technology. They may have been hidden in plain sight, their inventions and contributions touching our lives in ways we don't even realize, but they have always been part of the story.

VICE reporter and YACHT lead singer Claire L. Evans finally gives these unsung female heroes their due with her insightful social history of the Broad Band, the women who made the internet what it is today.

Seek inspiration from Grace Hopper, the tenacious mathematician who democratized computing by leading the charge for machine-independent programming languages after World War II. Meet Elizabeth "Jake" Feinler, the one-woman Google who kept the earliest version of the Internet online, and Stacy Horn, who ran one of the first-ever social networks on a shoestring out of her New York City apartment in the 1980s.

Join the ranks of the pioneers who defied social convention to become database poets, information-wranglers, hypertext dreamers, and glass ceiling-shattering dot com-era entrepreneurs. This inspiring call to action shines a light on the bright minds whom history forgot, and shows us how they will continue to shape our world in ways we can no longer ignore.

Welcome to the Broad Band. You're next.
Read More
"An insightful, intelligent observer...Evans proves a companionable guide for a tour through cyberspace...[and] provide[s] much needed perspective." —New York Times

“Broad Band is a celebration of the women whose minds gave birth to the motherboard and its brethren.... an engaging series of biographical essays on lesser known mathematicians, innovators and cyberpunks." —Wall Street Journal

"A jaunty new history of women in computing." —WIRED

“A spirited collection of portraits of women who contributed to the infrastructure of the digital economy.” —Wall Street Journal

"In this inspiring tale, writer Evans chronicles the contributions of some of the many women who aided the rise of the modern Internet." —Scientific American

“An invigorating history of female coders, engineers, entrepreneurs, and visionaries who helped create and shape the internet.” —Publishers Weekly

"An edifying and entertaining history of the rise of the computer age and the women who made it possible. A good choice for fans of Hidden Figures." —Kirkus

A “fascinating and inspiring work of women’s history.” —Booklist

“Broad Band is the Our Bodies, Ourselves for all computer users—this knowledge belongs to us. And Claire Evans tells the story like a friend who knows you get bored easily; a generous sort of brilliance that pulled me right in. This is a radicallyimportant, timely work.”
—MIRANDA JULY, filmmaker, artist, and author of The First Bad Man

“Broad Band is such an interesting secret history, written with great panache.”
—JON RONSON, author of The Psychopath Test and So You’ve Been Publicly Shamed

“A necessary addition to the story of women in computing, about known heroes and the fearless women and punks the world needs to know more about.”
—ELLEN ULLMAN, author of Life in Code, Close to the Machine, and The Bug

“Broad Band is thrilling, powerful stuff. At once an electric feminist history of modern tech and a much-needed corrective to the hyper-male mythology of Silicon Valley, Evans’s compelling, surprising, and eminently readable work restores due credit to the countless brilliant women who made the connected world into what it is today.”
—BRIAN MERCHANT, author of The One Device

“Evans’s riveting account of female innovators from the Victorianage to today fills in gaps in the history we should have had all along, and provides unique, enlightening insight into some of the most revolutionary technological advances of our time—from the world’s first computer game to the creation of the ‘.com’ domain.”
—JOSHUA DAVIS, author of Spare Parts
Read More