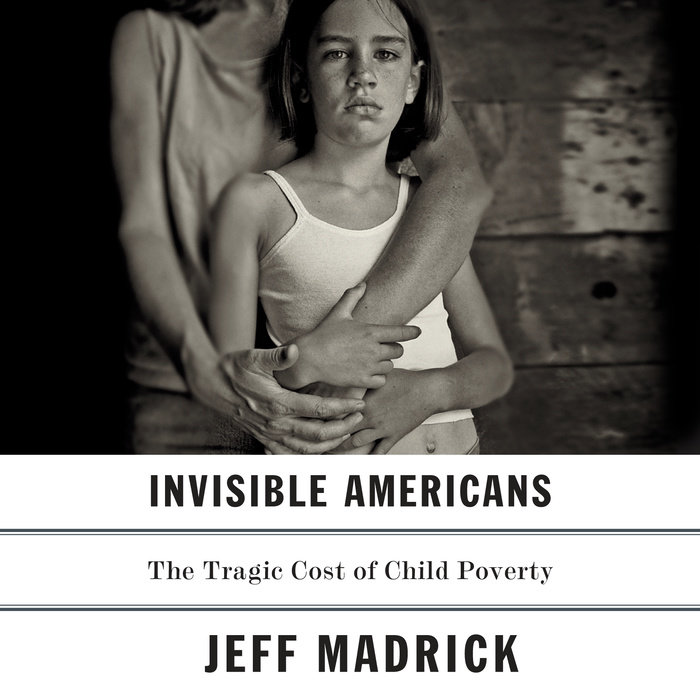 By official count, more than one out of every six American children live beneath the poverty line. But statistics alone tell little of the story. In Invisible Americans, Jeff Madrick brings to light the often invisible reality and irreparable damage of child poverty in America. Keeping his focus on the children, he examines the roots of the problem, including the toothless remnants of our social welfare system, entrenched racism, and a government unmotivated to help the most voiceless citizens. Backed by new and unambiguous research, he makes clear the devastating consequences of growing up poor: living in poverty, even temporarily, is detrimental to cognitive abilities, emotional control, and the overall health of children. The cost to society is incalculable. The inaction of politicians is unacceptable. Still, Madrick argues, there may be more reason to hope now than ever before. Rather than attempting to treat the symptoms of poverty, we might be able to ameliorate its worst effects through a single, simple, and politically feasible policy that he lays out in this impassioned and urgent call to arms.
Read More
"A clarion call to address this most unjust blight upon the American landscape. Madrick has provided a valuable service in presenting a highly readable and cogent argument for change. . . Grass-roots groups across the country have been organizing and working to fundamentally change the conditions that disenfranchise so many Americans, poor and nonpoor alike. They would do well to use Invisible Americans as a launching point."—Mark R. Rank, The Washington Post

"[Madrick’s] outrage is clear. . . If our leaders absorbed this book’s urgent call, perhaps they would discuss poverty — and act to ease it — once again.”—Alissa Quart, The New York Times Book Review

“At a time of intense debate about income inequality, [Madrick] puts a face—or millions of young faces—on the meaning of real poverty and deprivation.”—Harvard Magazine

“A useful book that reveals what might be considered a secret shame but that is hiding in plain sight.”—Kirkus

“Compelling. . . Madrick addresses a systemic problem with a simple solution. His argument will appeal to those who champion economic policy change that centers the child.”—Angela Forret, Library Journal

“Armed with extensive research that cuts through popular myths about child poverty, Madrick roots his provocative arguments in searing facts that should make every American ashamed—and determined to act on his sensible solutions.”—David Shipler, author of The Working Poor

“Invisible Americans provides a devastating portrait of the nature and consequences of child poverty in the United States. Madrick demonstrates that these worrisome poverty rates are the result of multiple policy failures – failures that result, in turn, from choices that Americans have made. Madrick explains, with passion and precision, that the necessary policy instruments are known and tested. What is lacking in the United States, sadly, is the political will.”—Janet C. Gornick, author of Families that Work

“Madrick systematically builds the case for a universal monthly allowance for children that will dramatically reduce child poverty.  He offers both a comprehensive view of the history of child poverty in our nation and a glimpse of where we may be headed.”—David Harris, President of Children’s Research and Education Institute

“In Invisible Americans, Jeff Madrick shines invaluable light on a much-neglected crisis: the more than one in five children—some 13 million children—who live in poverty in the world’s wealthiest nation.  Madrick explains how this crisis has stunted  millions of children and shows how the United States has fallen woefully short of its promise of equal opportunity. Madrick makes devastatingly clear that America’s child poverty problem is a moral disgrace. Concise, compelling, and urgent, Invisible Americans concludes with some smart ideas on how to quickly reduce child poverty.” – Steven Greenhouse, author of Beaten Down, Worked Up

"Jeff Madrick gives an excellent account of the contours and consequences of child poverty in the United States, as well as the failed social policies of the last three decades that have done little to address this problem. He also makes a powerful argument for the simplest possible solution, giving poor families money.  A very timely and useful book."—Dean Baker, author of Rigged
Read More