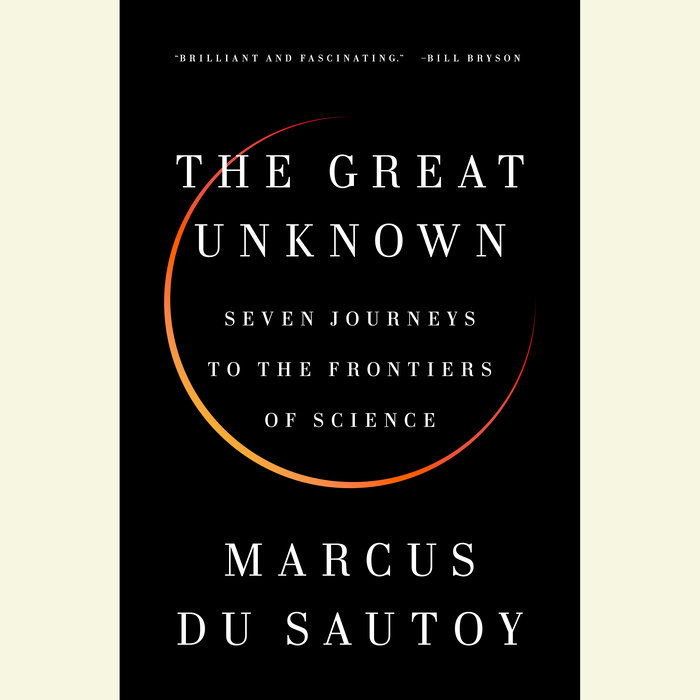 “No one is better at making the recondite accessible and exciting.” —Bill Bryson

Brain Pickings and Kirkus Best Science Book of the Year

Every week seems to throw up a new discovery, shaking the foundations of what we know. But are there questions we will never be able to answer—mysteries that lie beyond the predictive powers of science? In this captivating exploration of our most tantalizing unknowns, Marcus du Sautoy invites us to consider the problems in cosmology, quantum physics, mathematics, and neuroscience that continue to bedevil scientists and creative thinkers who are at the forefront of their fields.

At once exhilarating, mind-bending, and compulsively readable, The Great Unknown challenges us to consider big questions—about the nature of consciousness, what came before the big bang, and what lies beyond our horizons—while taking us on a virtuoso tour of the great breakthroughs of the past and celebrating the men and women who dared to tackle the seemingly impossible and had the imagination to come up with new ways of seeing the world.
Read More
“I felt I was being carried off on a wonderful journey, a thrilling research expedition to the teasing and mysterious boundaries of scientific knowledge, and I never wanted to turn back. Du Sautoy is a masterful and friendly guide to these remotest regions. His explanations are clear, vivid, and above all patient, but he also writes with a personal excitement and a self-depricating wit, which gives this a remarkable freshness and intimacy. The book has an extraordinary one-to-one feel and challenges you to think for yourself. It is absolutely fascinating throughout, and I really loved it.”—Richard Holmes, author of The Age of Wonder

“Each spiraling investigation begins with an object: casino dice kick-start a foray into probability; a wristwatch propels us into grappling with time. A dazzling journey, vivified by conversations with the likes of neuroscientist Christof Koch on psychophysics and cosmologist Max Tegmark on the mathematical Universe.” —Nature

“A fascinating book on the limits of scientific knowledge.” —The Economist

“An intriguing bird’s-eye view of the landscape of unknowability.” —The Wall Street Journal

“An engaging, personal, and highly user-friendly voyage into some of the great mysteries and wonders of our world." —Alan Lightman, author of Einstein’s Dream and The Accidental Universe

"I admire and envy the clarity and authority with which Marcus du Sautoy addresses a range of profound issues. His book deserves a wide readership." —Martin Rees, British Astronomer Royal and author of Before the Beginning

“He has a gift for making the most abstruse concepts understandable. You’ll feel smarter with every page.”—Mail On Sunday

“The book reviews some of the great puzzles challenging science in chaos theory, quantum mechanics, cosmology, the nature of time, the origins of human consciousness and the limits of the universe… An absorbing entry into the genre of ‘what science hasn’t figured out yet’”
—Forbes

“The prominent mathematician, writer and broadcaster boldly squares up to what he calls the seven “edges” of human knowledge, topics that range from the nature of time to the mysteries of human consciousness... His take is refreshing, not least because along his journey he exposes with humility his own confusions, apprehensions and concerns. And there is plenty to be both baffled and enlightened about. Does a multiverse exist? Are leptons and quarks where the subatomic buck stops? And is an infinite set of even numbers bigger than an infinite set that also includes odd ones?”—The Observer

“Brilliant and fascinating. No one is better at making the recondite accessible and exciting.” —Bill Bryson, author of A Short History of Nearly Everything

"There is no better guide than Marcus du Sautoy to provide a panoramic view of the boundaries of knowledge.” —Robbert Dijkgraaf, Institute for Advanced Study, Princeton

“Du Sautoy makes a lucid and beguiling companion as he guides us along the byways of contemporary science.” —The Guardian

“[Some] believe we have had enough of experts, but what we really need is the right sort of experts—ones who can explain tricky concepts without coming across as know-it-alls. Step forward Marcus du Sautoy, who devotes an entire book to what we cannot know, from predicting a simple dice roll to the vagaries of quantum mechanics.” —Sunday Times

“This brilliant, well-written exploration of our universes’ biggest mysteries will captivate the curious and leave them pondering ‘natural phenomena that will never be tamed and known.” —Publishers Weekly (Starred Review)

“Admirably compact and conversational for such wide-ranging subject matter . . . Those eager to have their minds stretched will find this a rewarding and stimulating experience.” —Booklist
Read More

This Is The Author | Marcus du Sautoy