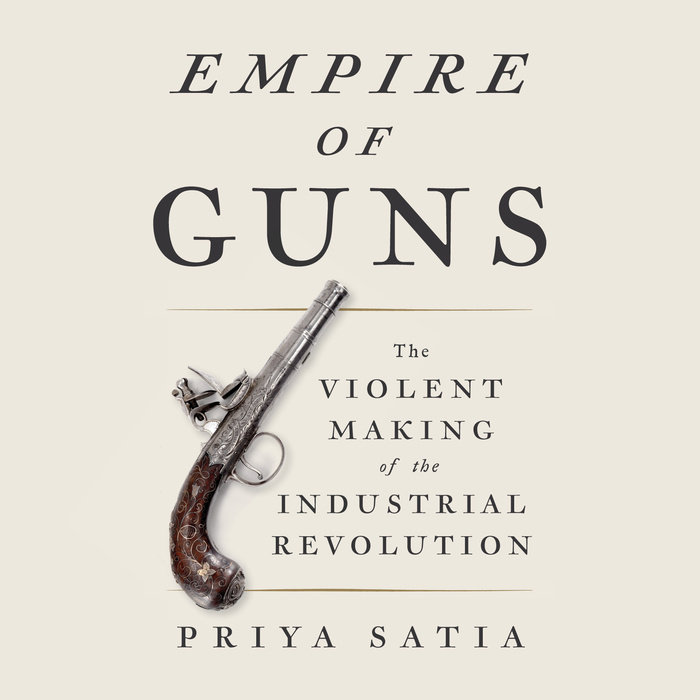 By a prize-winning young historian, an authoritative work that reframes the Industrial Revolution, the expansion of British empire, and emergence of industrial capitalism by presenting them as inextricable from the gun trade

"A fascinating and important glimpse into how violence fueled the industrial revolution, Priya Satia's book stuns with deep scholarship and sparkling prose."--Siddhartha Mukherjee, Pulitzer Prize-winning author of The Emperor of All Maladies

Satia brings to life this bustling industrial society with the story of a scandal: Samuel Galton of Birmingham, one of Britain's most prominent gunmakers, has been condemned by his fellow Quakers, who argue that his profession violates the society's pacifist principles. In his fervent self-defense, Galton argues that the state's heavy reliance on industry for all of its war needs means that every member of the British industrial economy is implicated in Britain's near-constant state of war.

Empire of Guns uses the story of Galton and the gun trade, from Birmingham to the outermost edges of the British empire, to illuminate the nation's emergence as a global superpower, the roots of the state's role in economic development, and the origins of our era's debates about gun control and the "military-industrial complex" -- that thorny partnership of government, the economy, and the military. Through Satia's eyes, we acquire a radically new understanding of this critical historical moment and all that followed from it.

Sweeping in its scope and entirely original in its approach, Empire of Guns is a masterful new work of history -- a rigorous historical argument with a human story at its heart.
Read More
“Satia’s detailed retelling of the Industrial Revolution and Britain’s relentless empire expansion notably contradicts simple free market narratives. . . . She argues convincingly that the expansion of the armaments industry and the government’s role in it is inseparable from the rise of innumerable associated industries from finance to mining. . . . Fascinating.”—The New York Times

“A fascinating study of the centrality of militarism in 18th-century British life, and how imperial expansion and arms went hand in hand…This book is a triumph.” —Guardian

“Satia marshals an overwhelming amount of evidence to show, comprehensively, that guns had a place at the center of every conventional tale historians have so far told about the origins of the modern, industrialized world. . . . Spanning four continents and three centuries, tackling the fundamental nature of industrialization and capitalism, Empire of Guns belongs to the last decade’s resurgence in so-called ‘big history’. . . . Though not presented as a political book, the implications of Satia’s work are difficult to ignore. . . . This book leaves us with the disquieting notion that guns—whether the slow and inaccurate weapons of the eighteenth century or today’s models—do more than alternately cloak or explore human inclination towards violence. They also shape it—not just at the individual level, as we are accustomed to debating, but at the societal, even civilizational or global, level as well. ‘As we make objects, they make us.’”—The New Republic

“Sweeping and stimulating. . . . An extensively researched and carefully crafted narrative. . . . This important book helps us to look at British and United States history in an unconventional way and makes for great reading.”—BookPage

“A solid contribution to the history of technology and commerce, with broad implications for the present.” – Kirkus

“A fascinating and important glimpse into how violence fueled the industrial revolution, Priya Satia’s book stuns with deep scholarship and sparkling prose.” —Siddhartha Mukherjee, Pulitzer Prize-winning author of The Emperor of All Maladies

“Empire of Guns is a richly researched and probing historical narrative that challenges our understanding of the engines that drove Britain’s industrial revolution. With this book, Priya Satia introduces Samuel Galton and the economies of guns and war into the historical equation and, with it, affirms her place as a deeply captivating and thought-provoking historian.”—Caroline Elkins, winner of the Pulitzer Prize for Imperial Reckoning

“Empire of Guns is an important revisionist account of the industrial revolution, reminding us that the making of the modern state and the making of modern capitalism were tightly intertwined. A revelatory book.”—Sven Beckert, finalist for the Pulitzer Prize for Empire of Cotton

“Empire of Guns boldly uncovers a history of modern violence and its central role in political, economic, and technological progress. As unsettling as it is bracing, it radically deepens our understanding of the ‘iron cage’ of modernity.”—Pankaj Mishra, author of Age of Anger

“A strong narrative bolstered by excellent archival research. . . . Tremendous scholarship. . . . Satia’s detailed and fresh look at the Industrial Revolution has appeal and relevance grounded in and reaching beyond history and social science to illuminate the complexity of present-day gun-control debates.”—Booklist
Read More