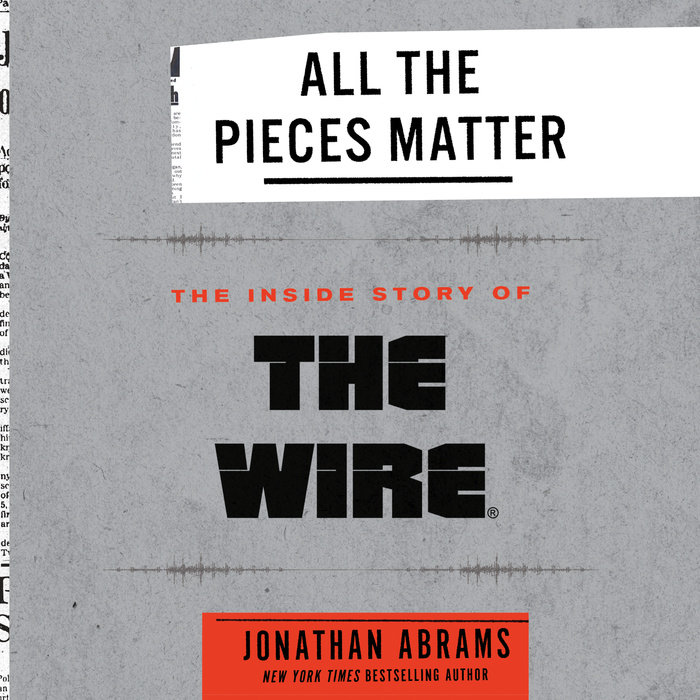 The definitive oral history of the iconic and beloved TV show The Wire, as told by the actors, writers, directors, and others involved in its creation.

Since its final episode aired in 2008, HBO's acclaimed crime drama The Wire has only become more popular and influential. The issues it tackled, from the failures of the drug war and criminal justice system to systemic bias in law enforcement and other social institutions, have become more urgent and central to the national conversation. The show's actors, such as Idris Elba, Dominic West, and Michael B. Jordan, have gone on to become major stars. Its creators and writers, including David Simon and Richard Price, have developed dedicated cult followings of their own. Universities use the show to teach everything from film theory to criminal justice to sociology. Politicians and activists reference it when discussing policy. When critics compile lists of the Greatest TV Shows of All Time, The Wire routinely takes the top spot. It is arguably one of the great works of art America has produced in the 20th century.

But while there has been a great deal of critical analysis of the show and its themes, until now there has never been a definitive, behind-the-scenes take on how it came to be made. With unparalleled access to all the key actors and writers involved in its creation, Jonathan Abrams tells the astonishing, compelling, and complete account of The Wire, from its inception and creation through its end and powerful legacy.
Read More
“A book that is sure to delight… Fans of The Wire can spend hours debating the merits of their favorite characters. The book features incisive recollections by all of them.” —Associated Press

“From the moment The Wire ended, all I have wished for is one more season. Jonathan Abrams has given us something just as valuable—the complete story of how something this wonderful, rich, and intricate came to be. I treasured every episode of the show, and I loved every word of this book. All The Pieces Matter is a must-read for any fan of The Wire, or anyone who wants to know how great art is made.” —Mike Schur, creator of Parks and Recreation, Brooklyn 99, and The Good Place

“Amazing…the stories Abrams tells deliver the same mix of humor and despair that made The Wire worth writing so much about.” —The AV Club

“All the Pieces Matter makes for compulsive reading, whether you're just getting up on The Wire or you know every episode by heart. The Wire is like a book you pick up and reread every few years. Now that book has the perfect companion.” —Dallas Morning News

“Excellent….All the Pieces Matter renders the making of The Wire in enough rich detail to please even its most ardent fans….But it’s the time capsule aspect Abrams captures, of The Wire as a product of its particular moment, that may be the book’s most illuminating feature. It is, among its other merits, that vanishingly rare thing: an honest treatment of the fraught relationship between TV as business and TV as art.” —Paste Magazine

"The definitive dissection of television's most politically meaningful invention." —Chuck Klosterman, New York Times bestselling author of But What if We’re Wrong? and I Wear The Black Hat

“Lovers of HBO’s The Wire rejoice: journalist Abrams delivers a comprehensive study of what goes into creating an acclaimed TV show. Abrams indisputably has created a thorough examination of The Wire’s conception, production, and lingering cultural afterlife.” —Publisher's Weekly

“The Wire is, in all likelihood, the greatest television show in history. It was perfectly written, perfectly casted, perfectly acted. And I didn’t think it could any better than it is. And yet, somehow, All The Pieces Matter, which allows an unprecedented peek behind the show’s curtain, does exactly that. Imagine getting to talk to Da Vinci before a brush stroke, or getting to talk to LeBron James mid-flight before dunk. That's what this book is. Jonathan Abrams is a marvel.” —Shea Serrano, New York Times bestselling author of The Rap Yearbook

"The best book ever written about the art and business of television." —Matt Zoller Seitz, New York Times bestselling author of TV (The Book) and The Wes Anderson Collection

"Delves deep into the show's creation and enduring legacy through interviews with the actors, writers, and producers who brought the show to life. Whether it's Dominic West reflecting on the allure of his character Detective James McNulty or actor Michael B. Jordan discussing the lasting impression of being in an ensemble cast of primarily black actors, Abrams underscores the indelible mark the show has left on actors and audience alike. Weaving all the interviews together is the enduring connection between the city of Baltimore and the creators of the show." —Library Journal

“Meticulous. Relentless. Occasionally hilarious. The same adjectives you'd use to describe The Wire can also be applied to Jonathan Abrams' essential oral history of the series. As it turns out, the most humanistic drama in television history was itself rife with compelling characters, complex politics and an excess of whiskey. Abrams tracks down the stories behind every beloved episode with the tenacity of Omar shopping for breakfast cereal.” —Andy Greenwald, host of The Watch and Talk the Thrones

“The Wire has thoroughly saturated popular culture in a way few television dramas ever have. In their own words, the people involved have given Jonathan Abrams a look at how it happenepd. You come at a show like this, you best not miss. Abrams doesn't.” —Charles P. Pierce, author of Idiot America

“Filled with revealing information from the participants, intriguing tidbits, and show trivia, this compendium will have fans scurrying back to their DVD sets.” —Kirkus
Read More