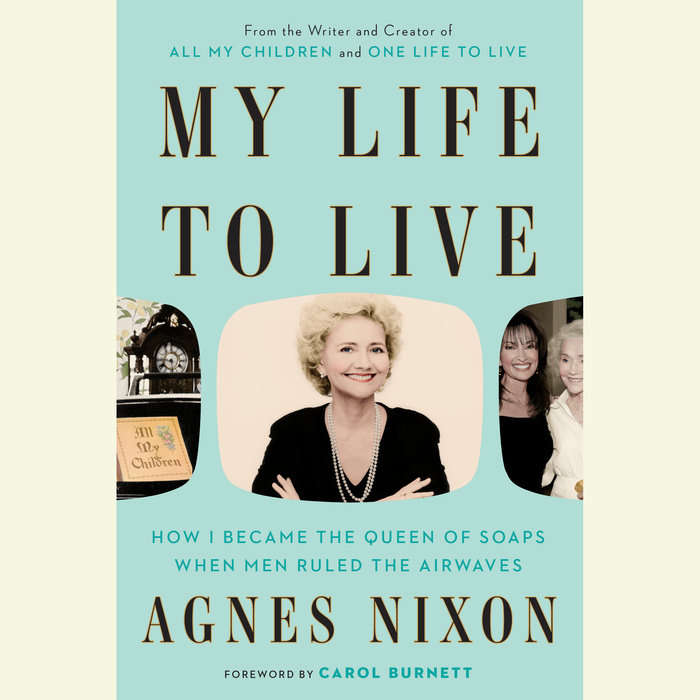 Written by: Agnes Nixon
Read by: Judith Ivey & Carol Burnett
Foreword by: Carol Burnett
8 Hours and 24 Minutes Imprint: Random House Audio Genre: Biography & Autobiography - Women Release Date: March 21, 2017
From the Emmy-winning writer and creator of All My Children, One Life to Live, and Loving, a memoir of her trailblazing rise to the top of the television industry, including behind-the-scenes stories from some of the most beloved soaps of all time

Before there was Erica Kane, Adam Chandler, or Victoria Lord, there was Agnes Nixon, a young girl who dreamed up stories for paper dolls. Those tales she imagined--ones filled with ambitions, rivalries, and romances--would soon echo her own path to success. In a memoir filled with as much drama as the soaps she penned, Nixon shares her journey as daughter of a broken marriage, who fought back against her father's wish that she take over the family burial garments business, overcame the heartbreak of losing her fiancé in WWII, and later became one of the most successful names in the TV industry.

Fans of Nixon's greatest creations, All My Children and One Life to Live, will delight at Nixon's own incredible life, as well as the behind-the-scenes insight she lends to daytime's most popular programs. Nixon will share the inspiration behind and casting of the iconic character Erica Kane, played by Susan Lucci; the story bible for All My Children, and how it became lost, and then locked away in a drawer for many years; and how Nixon positioned ABC to become the media giant it is today, despite pushback from her male counterparts. This candid glimpse behind the curtain of the soap opera industry will charm soap fans and story lovers alike.

With a foreword written and read by Carol Burnett.
Read More
“I owe my career to Agnes Nixon, who was not only a brilliant creator and writer, but also my friend. My Life to Live is full of wonderful, evocative stories from her life and career that even I hadn’t heard. And in typical Agnes fashion, her storytelling is full of humanity, social relevance and delicious humor! I know that her legions of fans will treasure it as much as I do.”
—Susan Lucci

“Aggie Nixon is the only person I've ever known whom I didn't say awful things about. And much to my dismay, her memoir did nothing to change that. Unforgivable.”
—Larry David

“[Agnes’s] career wasn’t easy to come by…. We know she won, but the story of her ups and downs make this book a true page-turner.”
—Carol Burnett, from the foreword

“A meaty and fascinating look into the private and professional world of the beloved television pioneer.”
—Soap Opera Digest

“A must-read for every soap opera fan!”
—ABC Soaps in Depth

“In her heartfelt book, [Nixon] opened up about…the lessons she learned about working outside the home from the women in her family.…While telling socially relevant stories on All My Children, Nixon also infused glamour, adventure and a lot of romance.”
—ABC.com

"“[An] engaging memoir…Not only does it provide all manner of detail about characters and incidents over those tumultuous years, but it shows the determination to make a difference which was her abiding motivation."
—Martin Rubin, Washington Times
Read More