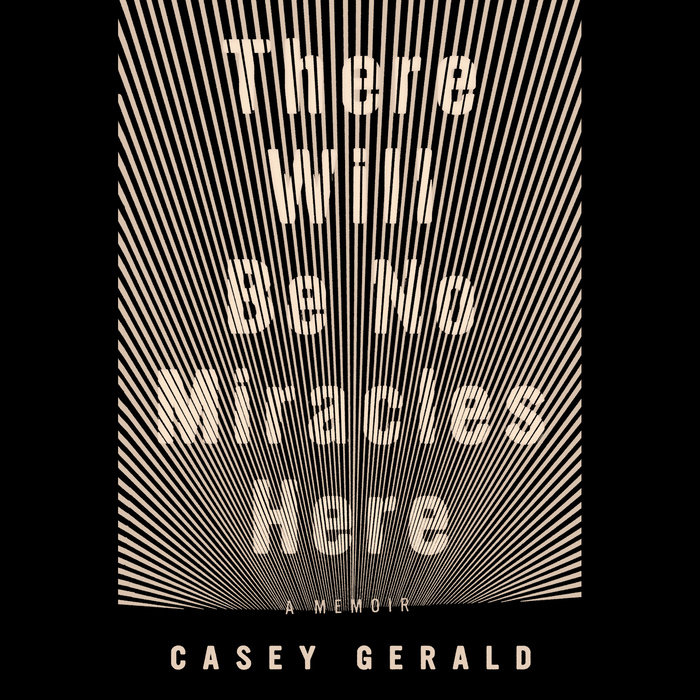 "Somehow Casey Gerald has pulled off the most urgently political, most deeply personal, and most engagingly spiritual statement of our time by just looking outside his window and inside himself. Extraordinary." —Marlon James

"Staccato prose and peripatetic storytelling combine the cadences of the Bible with an urgency reminiscent of James Baldwin in this powerfully emotional memoir." —BookPage

The testament of a boy and a generation who came of age as the world came apart—a generation searching for a new way to live.

Casey Gerald comes to our fractured times as a uniquely visionary witness whose life has spanned seemingly unbridgeable divides. His story begins at the end of the world: Dallas, New Year's Eve 1999, when he gathers with the congregation of his grandfather's black evangelical church to see which of them will be carried off. His beautiful, fragile mother disappears frequently and mysteriously; for a brief idyll, he and his sister live like Boxcar Children on her disability checks. When Casey--following in the footsteps of his father, a gridiron legend who literally broke his back for the team--is recruited to play football at Yale, he enters a world he's never dreamed of, the anteroom to secret societies and success on Wall Street, in Washington, and beyond. But even as he attains the inner sanctums of power, Casey sees how the world crushes those who live at its margins. He sees how the elite perpetuate the salvation stories that keep others from rising. And he sees, most painfully, how his own ascension is part of the scheme.

There Will Be No Miracles Here has the arc of a classic rags-to-riches tale, but it stands the American Dream narrative on its head. If to live as we are is destroying us, it asks, what would it mean to truly live? Intense, incantatory, shot through with sly humor and quiet fury, There Will Be No Miracles Hereinspires us to question--even shatter--and reimagine our most cherished myths.
Read More
“Stunningly original … By breaking every rule of the … genre, [Gerald has] created something unique and sublime: a beautiful chronicle of a life as yet unfinished … a shining and sincere miracle of a book.” –NPR

“Undeniably inspirational...a literary and often dark look at the effects the national virtue of self-reliance can have on the people who live according to it, with particularly moving passages about the atmosphere of stress, pain, and racial divides on college campuses.” –Vanity Fair

“Searing . . . rendered in vivid, painful, and regularly funny reminiscence. But more than anything else, this bildungsroman is a wry document of American class strata.” – O, The Oprah Magazine

"Magnificent... at turns exuberant, humorous, unsentimental, imaginative, keen. … The locus of the book is [Gerald's] extraordinary journey. … Along the way, he learns plenty about his country, the elites who run it and the underclass subject to their rule. He often relays his insight with indelible aphorism. …His life, and this memoir, serve as proof of his prodigious talents, of the truth that, for the gifted like him, struggles … can yield something miraculous.” –New York Times Book Review

“Infuriating and deeply moving . . . It’s a rare memoirist who does not just recall, but inhabits the past, who understands that memory is a pliable thing, a means to, not the end of, a story . . . There’s a bit of Barbara Kingsolver in this, a bit of James Baldwin . . . urgent, lyrical [and] timely.” –Texas Observer

“[A] compulsively readable memoir … about coming into the light of reality in a world filled with deceit and loss, love and hope. . . . Gerald’s staccato prose and peripatetic storytelling combine the cadences of the Bible with an urgency reminiscent of James Baldwin.” – BookPage

“[Gerald] delivers a beautifully written cautionary tale about the toll taken by society even on those like him, fortunate enough to defy the tremendous odds against their success.” –Vulture

“A memoir of lacerating honesty and self-awareness, a book that lets you feel how badly the author needed to write it . . . There Will Be No Miracles Here is a portrait of a man looking for what's real, within and for himself. It's also a testament to the power of written words and the role they play in personal transformation. Reading Gerald's book is to see the author come alive, and to look in wonder at the process.” – Dallas Morning News

“A vital missive to these cracked-up times . . . Gerald nimbly avoids the twin perils of self-pity and romanticism, with writing that is muscular and direct.” – Out Magazine

“[Gerald] take[s] on the important work of exposing the damage done to America, especially its black population, by the failure to confront the myths, half-truths, and lies at the foundation of the success stories that the nation worships.” – The Atlantic

“An extraordinary portrait of what it means to live on both the bottom and the top of American life.” –Anand Giridharadas, The Ezra Klein Show

“Somehow Casey Gerald has pulled off the most urgently political, most deeply personal, and most engagingly spiritual statement of our time by just looking outside his window and inside himself. Extraordinary.” –Marlon James

“A deeply spiritual memoir about growing up black, poor, and gay in evangelical Texas; Gerald has become a superstar as a TED talker and MBA powerhouse, but this book is quiet and reflective, a document of fearless humility.” –Boston Globe

“[A] compelling look at how the elite maintain their status at the expense of others.” –Paste Magazine

“From the first line of this astonishing book, we know we are in for a trip we've never gone on before in memoir. The book braids, un-braids and re-braids threads of the personal, the political and the philosophical, in a voice that is ironically comedic and at the same time wholly sincere. There Will Be No Miracles Here is a glowing literary event.” –Kiese Laymon

“A formally inventive and lyrical memoir about boyhood, blackness, masculinity, faith, privilege, and the search for self that investigates the idea of the American dream, and how the myth of ascension–including the author’s own—is what can ultimately undo us.” –Poets & Writers

“Casey Gerald’s book is urgent, mesmeric, soaring, desperately serious, wounded and, at times, slyly, brilliantly comic. The world he creates is vivid, the invocation of the personal and the political sharp and knowing. The style is flawless, the pace perfectly judged. Electrifying.” –Colm Tóibín

“Bitingly humorous yet brimming with pain, Gerald's book lays bare his yearning to be ‘a normal person’ . . . As books helped save him, so may his save others.” – Shelf Awareness (starred review)

“Original, important books often defy summary, and even a string of quotations can’t capture the reading experience. This is true of Casey Gerald’s There Will Be No Miracles Here...In eloquent prose, and with a fluid storytelling that helps explain the viral popularity of his TED talk, Gerald unfolds a coming-of-age tale by turns poignant and triumphant, fierce and surprising. It is a telling that hums with humor, erudition, and grace.” – Yale Alumni Magazine

“Any one anecdote from Casey Gerald’s extraordinary life could be the stuff of an entire book . . . But Gerald has something bigger in mind. He weaves these anecdotes together to make readers examine our assumptions about the classic American rags-to-riches story he so perfectly embodies — and which, he argues, is lethally dangerous to society’s disenfranchised. Read this book to rethink your definitions of success, failure, and who among us deserves which.” –Brightly

“This is the book for all of us who have juggled double (and triple, and quadruple) consciousnesses, and for those of us who have prayed to false gods and passed as false selves. Casey Gerald leads us through blackness and boyhood, love and masculinity, faith and privilege, on his journey toward the only self who could write these fierce and luminous pages. This book is fire.” –Danzy Senna

“ Gerald pulls no punches in telling his extraordinary story, which he relates with unsparing truth, no small amount of feeling, and a complete lack of sentimentality. Painful lessons dart in and pummel his unsuspecting self, and scenes of startling intensity are often pierced—and pieced back together—by light and humor…Richly layered writing on poverty, progress, race, belief, and the actual American Dream.” –Booklist (starred)

“Hardly a by-the-numbers memoir, this is a powerful book marked by the author's refreshingly complicated and insightful storytelling.” –Kirkus Reviews (starred)