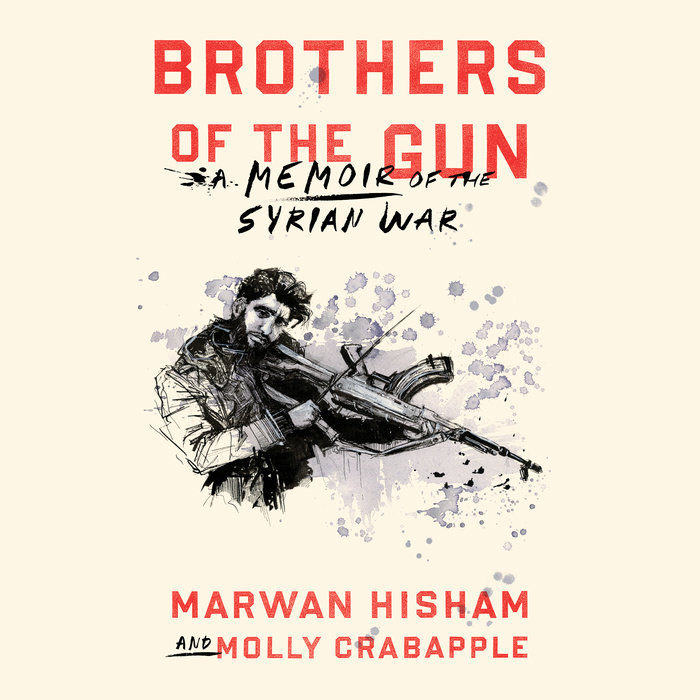 A bracingly immediate memoir by a young man coming of age during the Syrian war, Brothers of the Gun is an intimate lens on the century’s bloodiest conflict and a profound meditation on kinship, home, and freedom.

In 2011, Marwan Hisham and his two friends—fellow working-class college students Nael and Tareq—joined the first protests of the Arab Spring in Syria, in response to a recent massacre. Arm-in-arm they marched, poured Coca-Cola into one another’s eyes to blunt the effects of tear gas, ran from the security forces, and cursed the country’s president, Bashar al-Assad. It was ecstasy. A long-bottled revolution was finally erupting, and freedom from a brutal dictator seemed, at last, imminent. Five years later, the three young friends were scattered: one now an Islamist revolutionary, another dead at the hands of government soldiers, and the last, Marwan, now a journalist in Turkish exile, trying to find a way back to a homeland reduced to rubble.

Brothers of the Gun is the story of a young man coming of age during the Syrian war, from its inception to the present. Marwan watched from the rooftops as regime warplanes bombed soldiers; as revolutionary activist groups, for a few dreamy days, spray-painted hope on Raqqa; as his friends died or threw in their lot with Islamist fighters. He became a journalist by courageously tweeting out news from a city under siege by ISIS, the Russians, and the Americans all at once. He watched the country that ran through his veins—the country that held his hopes, dreams, and fears—be destroyed in front of him, and eventually joined the relentless stream of refugees risking their lives to escape.

Brothers of the Gun offers a ground-level reflection on the Syrian revolution—and how it bled into international catastrophe and global war. This is a story of pragmatism and idealism, impossible violence and repression, and, even in the midst of war, profound acts of courage, creativity, and hope.

“From the anarchy, torment, and despair of the Syrian war, Marwan Hisham and Molly Crabapple have drawn a book of startling emotional power and intellectual depth. Many books will be written on the war’s exhaustive devastation of bodies and souls, and the defiant resistance of many trapped men and women, but the Mahabharata of the Levant has already found its wisest chroniclers.”—Pankaj Mishra, author of Age of Anger and From the Ruins of Empire

“A revelatory and necessary read on one of the most destructive wars of our time . . . In great personal detail, Marwan Hisham and Molly Crabapple poignantly capture the tumultuous life in Syria before, after, and during the war—from inside one young man’s consciousness.”—Angela Davis

“Marwan Hisham took part in the uprising against Bashar al-Assad and then did the unthinkable—wrote journalism from inside ISIS territory, risking his life so that the world might know the truth. He gives us an unforgettable portrait of what it feels like to resist a tyrannical dictator, live under ISIS occupation, brave bombs falling from the sky, and somehow survive with your humanity intact. Punctuated by Molly Crabapple’s beautiful, haunting art, this heart-rending memoir is essential reading to understand one of the greatest catastrophes of our time.”—Anand Gopal, author of No Good Men Among the Living
Read More