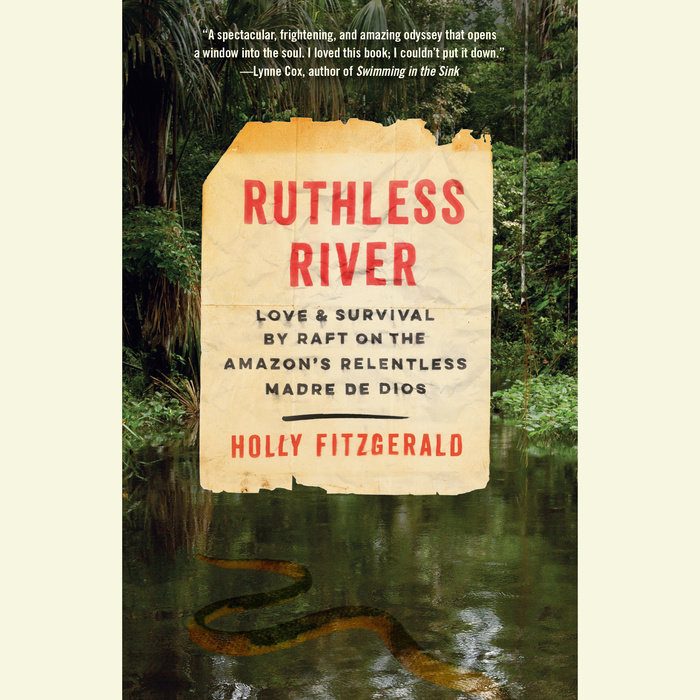 Written by: Holly FitzGerald
Read by: Jorjeana Marie
9 Hours and 56 Minutes Imprint: Random House Audio Genre: Biography & Autobiography - Personal Memoirs Release Date: May 30, 2017
A stunning debut; a Departures original publication. The ultimate survival story; a wild ride—the wildest—down a South American river in the thick of the Amazon Basin; a true and thrilling adventure of a young married couple who survive a plane crash only to later raft hundreds of miles across Peru and Bolivia, ending up in a channel to nowhere, a dead end so flooded there is literally no land to stand on. Their raft—a mere four logs—separates them from the piranha-and-caiman-infested water until they finally realize that there is no way out but to swim. Vintage Original.

Holly FitzGerald and her husband, Fitz—married less than two years—set out on a yearlong honeymoon adventure of a lifetime, backpacking around the world. Five months into the trip their plane crash lands in Peru at a penal colony walled in by jungle, and their blissfully romantic journey turns into a terrifying nonstop labyrinth of escape and survival.

On a small, soon-ravaged raft that quickly becomes their entire universe through dangerous waters alive with deadly animals and fish, their only choice: to continue on, despite the rush of insects swarming them by day, the sounds of encroaching predators at night. Without food or means of communication, with no one to hear their cries for help or on a search-and-rescue expedition to find them, the author and her husband make their way, fighting to conquer starvation and navigate the brute force of the river, their only hope for survival, in spite of hunger and weakening resolve, to somehow, miraculously hang on and find their way east to a large riverside town, before it is too late. . . .
Read More

"The 'survival' tale has long occupied a storied corner of the travel writing genre, from The Worst Journey in the World to In the Heart of the Sea. Holly FitzGerald's Ruthless River instantly takes its spot among these giants ... In this world of water, the FitzGeralds struggle in vain to find their way back to the river's current ... The couple endures, maintaining hope and affection for each other. It's this that elevates Ruthless River above the typically heroic tale of survival. In simple, unsentimental terms, Holly FitzGerald has given us a most unlikely love story."

“If you built a survival-adventure book in a laboratory, you’d end up with Ruthless River . . . A completely unexpected real-life thriller.
—Jon Foro, Omnivoracious (Best Biographies & Memoirs of June)

“A harrowing survival saga . . . In vivid, absorbing prose, FitzGerald unspools a story that moves from optimism, energy, and a thrilled sense of adventure to abject fear and near starvation.”
—Nina MacLaughlin, The Boston Globe

“Both travel memoir and shocking adventure story, like a real-life Survivor or Naked and Afraid . . . A powerful story about survival, love, and faith in the face of impossible odds . . .  Unputdownable . . . absolutely fascinating.”
—Katie Lawrence, Library Journal

“Vivid and consistently compelling . . . An absorbing tale of survival, love, and the generosity of people who helped save their lives.”
—Kirkus Reviews

“A detailed, high-stakes debut memoir . . . FitzGerald weaves in the stories from their past with palpable, evocative details of their daily struggles with starvation, strong currents, and despair, all while the couple’s love, self-knowledge, and faith deepen . . . Recommended for fans of survival narratives, coming-of-maturity stories, and travelogues from off the beaten path.”
—Louisa Whitfield-Smith, Booklist

“Adventure, romance, danger, salvation—all in a story that’s beautifully told and, incredibly, really happened. Pick up Ruthless River, but be careful. You might find it hard to put down. This is one of those memoirs you won’t soon forget.”
—Damon DiMarco, author of Tower Stories: An Oral History of 9/11

“There are lots of adventure stories out there, lots of romances, lots of spiritual memoirs, but I know of no other book that combines all three genres with such grace and beauty. Ruthless River is thrilling—edge-of-your-seat, hold-your-breath thrilling—but it’s so much more than that. It’s a meditation on how we find meaning and the strength to survive in an impossible circumstance, and one of the most tender love stories you’ll ever read. I love this book.”
—Kerry Egan, author of On Living

“The best real-life survival tale since Cheryl Strayed’s Wild . . . A jaw-dropper of a memoir . . . A mind-blower of a debut . . . A survival tale so extreme, so insane, so bizarre, that Hollywood couldn’t make it up. It’s stranger than fiction.”
—Lauren Daley, South Coast Today

“A spectacular, frightening, and amazing odyssey that opens a window into the soul. I loved this book; I couldn't put it down.”
—Lynne Cox, author of Swimming in the Sink

“One of the great survival tales. An almost unbearable story told with a physical and emotional intensity that draws the reader in, not just as witness, but as virtual participant. It’s an exhausting, painful, inspiring read.”
—Michael Palin, author of Traveling to Work

A Clean Drink and a Good Listen: Make a Verjus Spritz5 Audiobooks to Listen to on Your Next HikeStay Entertained While You GrillSee More