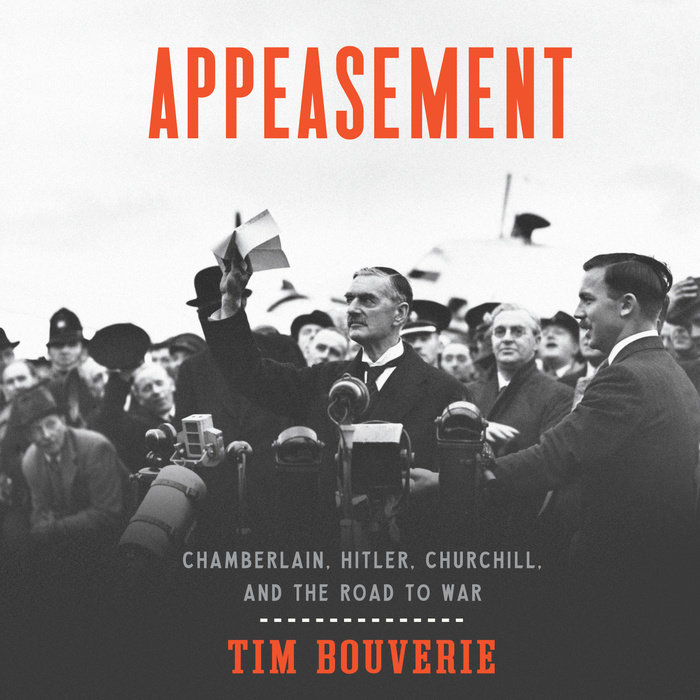 “An eye-opening narrative that makes for exciting but at times uncomfortable reading as one reflects on possible lessons for the present.”—Antonia Fraser, author of Mary Queen of Scots

On a wet afternoon in September 1938, Prime Minister Neville Chamberlain stepped off an airplane and announced that his visit to Hitler had averted the greatest crisis in recent memory. It was, he later assured the crowd in Downing Street, "peace for our time." Less than a year later, Germany invaded Poland and the Second World War began.

Appeasement is a groundbreaking history of the disastrous years of indecision, failed diplomacy and parliamentary infighting that enabled Hitler's domination of Europe. Drawing on deep archival research and sources not previously seen by historians, Tim Bouverie has created an unforgettable portrait of the ministers, aristocrats, and amateur diplomats who, through their actions and inaction, shaped their country's policy and determined the fate of Europe.

Beginning with the advent of Hitler in 1933, we embark on a fascinating journey from the early days of the Third Reich to the beaches of Dunkirk. Bouverie takes us not only into the backrooms of Parliament and 10 Downing Street but also into the drawing rooms and dining clubs of fading imperial Britain, where Hitler enjoyed surprising support among the ruling class and even some members of the royal family.

Both sweeping and intimate, Appeasement is not only an eye-opening history but a timeless lesson on the challenges of standing up to aggression and authoritarianism--and the calamity that results from failing to do so.
Read More
“It is refreshing that Tim Bouverie, a bright young British historian, should devote his debut book to debunking many of the pro-appeasement myths and reminding us that, in fact, it should be the anti-appeaser Winston Churchill who deserves the laurels. . . . Mr. Bouverie has been diligent in researching the sources and has an eye for the telling anecdote and aperçu. . . . The appeasement story and its lessons are ones for the ages.”—Andrew Roberts, The Wall Street Journal

“Comprehensive and immersive . . . This is well-paced narrative history: intelligent, lucid, riveting—even while possessing the terrible knowledge of what happened next.”—Jennifer Szalai, The New York Times

"An astonishingly accomplished debut. Bouverie writes with a wonderful clarity and we will no doubt hear a lot more of his voice in the future." —Antony Beevor, author of Stalingrad

“The single best account of what actions led the UK to fall into World War II.”—General Jim Mattis

“Appeasement is valuable as an exploration of the often catastrophic consequences of failing to stand up to threats to freedom, whether at home or abroad.”—Lynne Olson, The New York Times Book Review

"Appeasement is the stunning debut of a major new narrative historian. Tim Bouverie makes us look again at the familiar story of the doomed attempt to appease Hitler in the 1930s. A riveting and depressing story which has resonance today as the democracies again face dictatorships."—Margaret MacMillan, author of Paris 1919

“Bouverie provides an exceptionally fine portrait of his main character, Neville Chamberlain. . . . Appeasement is grounded in the political and social history of Great Britain during the period, making use of more than forty collections of personal papers and extensive examination of the press as well as the usual government documents to illustrate a changing spectrum of British attitudes and perceptions.”—Christopher R. Browning, The New York Review of Books

“This is the debut of an unusually talented writer, one of the most promising young historians to enter our field in years.” —Max Hastings, author of Inferno

"Drawing on an impressive and interesting range of sources and characters, Tim Bouverie has written a fascinating and scholarly portrait of a decade when credulity, self-interest, and poor judgement prevailed tragically and inexorably over morality and good sense: this is the reporting of history at its best." —Caroline Moorehead, author of A Train in Winter

"A brilliant and sparkling debut by an outstanding young historian. Tim Bouverie has written an account of the build-up to the Second World War that reads like a thriller. I couldn’t put it down." —Peter Frankopan, author of The Silk Roads

"Tim Bouverie tells the story of appeasement with skill, verve, and panache, using contemporary accounts to great effect in exploring the mentalities that lay behind the political decisions." —Ian Kershaw, author of Hitler
Read More