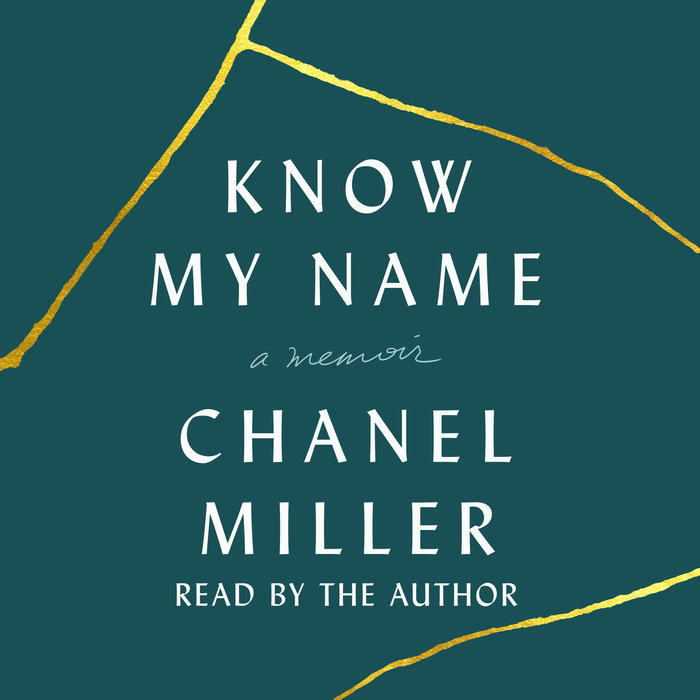 "I opened Know My Name with the intention to bear witness to the story of a survivor. Instead, I found myself falling into the hands of one of the great writers and thinkers of our time. Chanel Miller is a philosopher, a cultural critic, a deep observer, a writer's writer, a true artist. I could not put this phenomenal book down." --Glennon Doyle, #1 New York Times bestselling author of Love Warrior and Untamed

"Know My Name is a gut-punch, and in the end, somehow, also blessedly hopeful." --Washington Post

She was known to the world as Emily Doe when she stunned millions with a letter. Brock Turner had been sentenced to just six months in county jail after he was found sexually assaulting her on Stanford's campus. Her victim impact statement was posted on BuzzFeed, where it instantly went viral--viewed by eleven million people within four days, it was translated globally and read on the floor of Congress; it inspired changes in California law and the recall of the judge in the case. Thousands wrote to say that she had given them the courage to share their own experiences of assault for the first time.

Now she reclaims her identity to tell her story of trauma, transcendence, and the power of words. It was the perfect case, in many ways--there were eyewitnesses, Turner ran away, physical evidence was immediately secured. But her struggles with isolation and shame during the aftermath and the trial reveal the oppression victims face in even the best-case scenarios. Her story illuminates a culture biased to protect perpetrators, indicts a criminal justice system designed to fail the most vulnerable, and, ultimately, shines with the courage required to move through suffering and live a full and beautiful life.

Know My Name will forever transform the way we think about sexual assault, challenging our beliefs about what is acceptable and speaking truth to the tumultuous reality of healing. It also introduces readers to an extraordinary writer, one whose words have already changed our world. Entwining pain, resilience, and humor, this memoir will stand as a modern classic.

"She has written a memoir that converts the ongoing experience of sexual assault into literature...Beautiful."─The Atlantic

“To tell her story at all is enough…the fact that Miller tells it beautifully, caring enough for her reader to spin golden sentences from her pain, is a gift on top of a gift.” ─Vogue

"Know My Name is an act of reclamation. On every page, Miller unflattens herself, returning from Victim or Emily Doe to Chanel, a beloved daughter and sister...Know My Name marks the debut of a gifted young writer. Miller's words are purpose. They are maps. And she is a treasure who has prevailed."─Jennifer Weiner, The New York Times

“In this powerful, gutsy memoir, Miller—the sexual assault survivor in the Stanford case—reclaims her name and her story.”—The New York Times Book Review

"Know My Name is a blistering, beautifully written account of a courageous young woman's struggle to hold a sexual predator accountable. Stand back, folks: This book is going to give a huge blast of momentum to the #MeToo movement."─Jon Krakauer

“She writes exquisitely of her pain, makes us feel every fragment of it, but also expounds on the kindness that nourished her spirit…Miller matters. Readers will see every victim matters.” ─USA Today

“In a perfect world, Know My Name would be required reading for every police officer, detective, prosecutor, provost and judge who deals with victims of sexual assault.” ─LA Times

"Miller is a gifted storyteller...Know her name, know her voice."─The New Yorker

“Miller provides one of the most moving and humanizing depictions of sexual assault I have ever read…Know My Name features the kind of intimate, coming-of-age storytelling that you don’t find in a typical story about a crime and its aftermath. She lets us see her in quiet moments and jubilant ones, in moments of doubt and moments of strength…In giving us the gift of knowing her, Miller has written a singular testament to the human cost of sexual violence, and a powerful reminder of why we fight.” ─The Cut

“In a world that asks too many survivors to keep their experiences to themselves and shrink their suffering to preserve someone else’s potential, Know My Name stands unapologetically large, asking others to reckon with its author’s dazzling, undiminishable presence. To read it, in spite of everything, inspires hope.”—The Guardian

"I'd never read anything that so vividly paints the bewildering maze that a sexually assaulted woman faces...Know My Name raises crucial questions about the way we treat sexual assault and, indeed, sex itself." ─Katha Pollitt, The Nation

“In its rare honesty and in its small details, Know My Name is both an open wound and a salve, a quiet cry and the loudest scream…Know My Name is more than an indictment, though it is a successful and moving one. It is also an outstretched hand, inviting you to fight alongside her.”─Elle

“Compelling and essential…Miller reminds us that our stories are worth telling, that the names and the lives attached to those names matter.” ─SF Chronicle

"Triumphant...Know My Name evokes a woman whose spirit hasn’t been broken—a study in what it means to strike back, not in revenge, but in reclamation.”—O Magazine

"Miller's memoir, Know My Name, gives readers the privilege of knowing her not just as Emiy Doe, but as Chanel Miller the writer, the artist, the survivor, the fighter." ─The Wrap

“Miller distinguishes herself not only for her resilience and fortitude, but also for her power of expression. She possesses extraordinary gifts as a writer."─The National Book Review

“Miller makes a powerful case for overhauling a system that retraumatizes victims of sexual violence even in successful cases, perpetuating the feedback loop that discourages victims from coming forward to seek justice.” ─Mother Jones
Read More

News Brief: Audiobooks From the HeadlinesKnow Her Name —and Her Voice: Chanel Miller’s audiobook is “one of the most profound recordings Iâ€™ve ever taken part in”