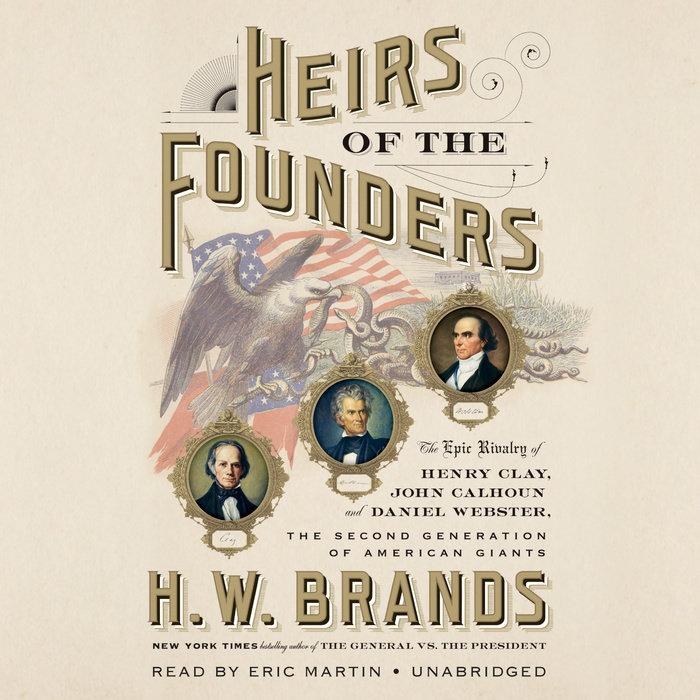 In the early 1800s, three young men strode onto the national stage, elected to Congress at a moment when the Founding Fathers were beginning to retire to their farms. Daniel Webster of Massachusetts, a champion orator known for his eloquence, spoke for the North and its business class. Henry Clay of Kentucky, as dashing as he was ambitious, embodied the hopes of the rising West. South Carolina's John Calhoun, with piercing eyes and an even more piercing intellect, defended the South and slavery.
Together these heirs of Washington, Jefferson and Adams took the country to war, battled one another for the presidency and set themselves the task of finishing the work the Founders had left undone. Their rise was marked by dramatic duels, fierce debates, scandal and political betrayal. Yet each in his own way sought to remedy the two glaring flaws in the Constitution: its refusal to specify where authority ultimately rested, with the states or the nation, and its unwillingness to address the essential incompatibility of republicanism and slavery.
They wrestled with these issues for four decades, arguing bitterly and hammering out political compromises that held the Union together, but only just. Then, in 1850, when California moved to join the Union as a free state, "the immortal trio" had one last chance to save the country from the real risk of civil war. But, by that point, they had never been further apart.
Thrillingly and authoritatively, H. W. Brands narrates an epic American rivalry and the little-known drama of the dangerous early years of our democracy.
Read More
“Lively and learned . . . Brands has produced a narrative that pulsates vigorously . . . The three senators wear themselves out and all but die on the job, their respective causes still unresolved, their long public service having earned them fame, but not the political prize for which they most lusted: the presidency (though not for want of trying).”
—Harold Holzer, Wall Street Journal

“Brands’s easy prose and superior, simple organization makes this work an engrossing, entertaining, and educating read on issues important then that echo today in the modern debate on the limits of federal government power.”
—Robert Davis, New York Journal of Books

“They were called ‘The Great Triumvirate’—three senators whose rivalries, alliances, and work in the tumultuous battles of the 19th century profoundly influenced the course of American history. H. W. Brands tells the story of Clay, Calhoun, and Webster with verve and clarity, reminding us of a bygone age when giants truly walked the floor of the United States Senate.”
—Jon Meacham, author of The Soul of America: The Battle for Our Better Angels

“H. W. Brands has brought us a searching and excellent account of three legendary Americans whose leadership and rivalries did so much to shape the period of our history between that of the Founders and the Civil War. Heirs of the Founders should remind those of our own time how important Clay, Calhoun, and Webster are to the nation we live in today.”
—Michael Beschloss, author of Presidents of War

“H. W. Brands, with his characteristic combination of sweep and eye for detail, tells the story—always exciting, often inspiring, ultimately tragic—of the titans who tried to guide the handiwork of the Founding Fathers through the turbulent first half of the nineteenth century. He weaves a cautionary tale for our own time of troubles.”
—Richard Brookhiser, author of John Marshall: The Man Who Made the Supreme Court

"Brands uses the life stories of three consequential early-19th-century American politicians—all with unfulfilled aspirations to become president—to show how tensions inherent in the founding fathers’ vision of the country led to the calamity of the Civil War . . . This fascinating history illuminates rifts that still plague the country today."
—Publishers Weekly

"An engrossing and revealing account of personal rivalries that played out on a national scale."
—Booklist
Read More