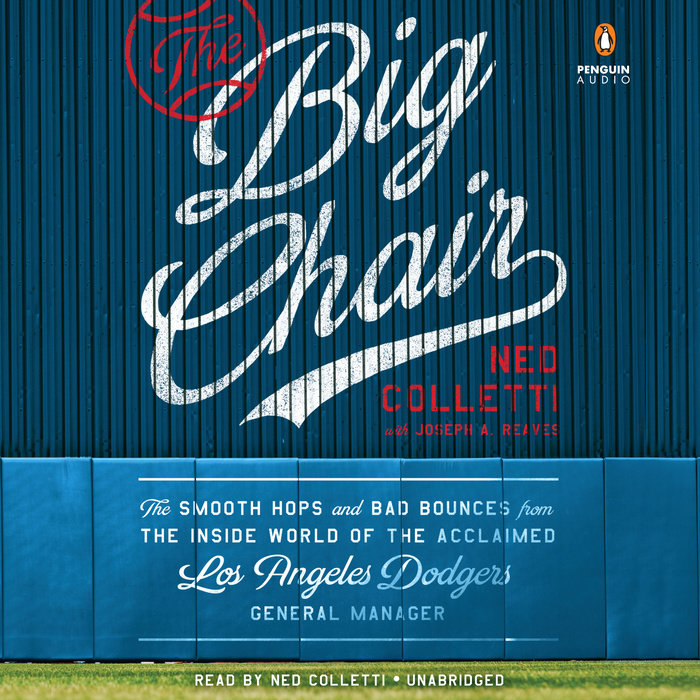 Written by: Ned Colletti & Joseph A. Reaves
Read by: Ned Colletti
12 Hours and 4 Minutes Imprint: Penguin Audio Genre: Biography & Autobiography - Sports Release Date: October 03, 2017
“An important contribution to 21st-century baseball literature. . . Mr. Colletti’s book might be even more groundbreaking [than Moneyball] in some ways: It’s a nearly unprecedented opportunity to see what running a baseball franchise looks like through the eyeballs of an actual general manager. . . [Colletti] has a gift for entertaining storytelling. . . These are stories modern general managers rarely tell, except in late-night gatherings at their favorite bars with people they know and trust. So to read them here, told in such colorful detail, makes you feel as if Ned Colletti has just invited you to plop down on the next bar stool.” --Wall Street Journal

“Ned Colletti is a baseball treasure with fascinating stories to tell from inside the game. The Big Chair is your all-access pass. After reading this book, you will not only understand the job of a general manager better but also the game of baseball itself.”—Tom Verducci, author of The Cubs Way and co-author of The Yankee Years

An unprecedented, behind-the-scenes look at the career of famed former Los Angeles Dodgers General Manager (a position also known as “The Big Chair”), whose tenure spanned nine of the most exciting and turbulent years in the franchise’s history.

During his tenure with the Dodgers, Colletti had the highest winning percentage of any general manager in the National League. In The Big Chair, he lets readers in on the real GM experience from his unique vantage point—sharing the inner workings of three of the top franchises in the sport, revealing the out-of-the-headlines machinations behind the trades, the hires and the deals; how the money really works; how the decision-making really works; how much power the players really have and why—the real brass tacks of some of the most pivotal decisions made in baseball history that led to great success along with heartbreak and failure on the field. Baseball fans will come for the grit and insight, stay for the heart, and pass it on for the wisdom.

Ned Colletti began his MLB career with his beloved hometown team, the Chicago Cubs, more than 35 years ago. He worked in Chicago for a dozen years and was in the front office when the Cubs won the National League East in 1984 and 1989, after which he moved on as director of baseball operations for the SF Giants. By 1996, he became the Assistant GM for the Giants, before being hired as the GM in Los Angeles in 2006. There he oversaw the Dodgers through the highly publicized and acrimonious divorce battle between Frank and Jamie McCourt that culminated in the equally highly publicized sale of the team. He was present at the press conference where Don Mattingly, having just watched his team eliminated from the playoffs, used the post-season conference to vehemently discuss his lack of a contract extension. He brought marquee names like Greg Maddux and Clayton Kershaw to LA, as well as marquee drama with the likes of Manny Ramirez and Yasiel Puig; hired future Hall of Famer Joe Torre as manager; and oversaw fourteen Dodgers playoff wins. And these are just a few of the highlights.

Colletti serves up a huge dish of first-hand experiences with some of the biggest names in baseball history (Barry Bonds, Greg Maddux, Don Mattingly, Don Zimmer, Tommy Lasorda, Scott Boras, Vin Scully, and more). From his humble early years living in a Chicago garage to his path to one of the most prestigious positions in professional sports, his very public and illustrious career has left a permanent handprint in the history of America's sport—and now he's ready to share the insight only those who have sat in The Big Chair have ever seen.
Read More
“One of the best baseball books I’ve ever read.”—Larry King

“As Ned helped me lead the baseball department for the Giants, he brought wisdom and perspective to our discussions. Now, in The Big Chair, readers will hear the wisdom and perspective that helped the organization change its culture and reach levels never before accomplished.”—Brian Sabean, three-time World Series champion, Executive VP, Baseball Operations, San Francisco Giants

“Ned Colletti is the best kind of baseball lifer. With a storyteller’s eye, he expertly pulls back the curtain on the games, the people, the days that made his journey unforgettable. The Big Chair is the worthy product of that life. Ultimately, it is a reminder that baseball—and the people in it—is not all about the numbers.”—Tim Brown, Yahoo! Sports writer and New York Times bestselling co-author of Imperfect and The Phenomenon

“Ned Colletti's terrific account of the inner workings of a baseball team is engaging, honest, accurate and a great read. Baseball fans hungry to understand what it’s really like will devour this.”—Terry Francona, manager, Cleveland Indians and author of Francona: The Red Sox Years

“Ned has been a baseball lifer since long before he climbed up his professional ladder that stretches from Chicago through San Francisco to Los Angeles. His stories, observations, and his baseball experiences ring nothing short of profoundly wise. Sharing in his journey is a must for any baseball fan, including myself.”—Chris Berman, ESPN Sportscaster

“Former Dodgers general manager Ned Colletti saw the team through a sale, 14 playoff wins, and the acquisitions of Clayton Kershaw and Yasiel Puig. The Big Chair offers inside-baseball insight thanks to his decades-long career in the major leagues.”—Los Angeles Magazine

“Colletti’s voice is on every page telling the kind of stories we may never hear again. What puts this book in a category of its own, however, is its big, thumping heart. I don't think I've ever read any baseball executive reveal his love and passion for baseball the way Colletti does here.” –John Schulian, winner of the PEN/ESPN Lifetime Achievement Award for Literary Sports Writing

"Hard to put down.” –Boston Globe

“A fascinating behind-the-scenes account of his 35 years working in the front office of the Cubs, Giants and Dodgers....More than anything, Colletti shows how being a GM is a 24/7 thrill ride.”—Chicago Tribune

“Alternating among declarations of his unabashed love for baseball, neutral reportage, and score-settling (usually with a smile and a subsequent peace offering), Colletti provides a variety of insights [and] offers unforgettable, candid profiles of hundreds of players...A treasure trove of characterizations and insights bound to entertain any MLB fan.”—Kirkus Reviews

“[An] entertaining and insightful mix of memoir and behind-the-scenes anecdotes...with a touch of poignancy.”—Publishers Weekly

“This is real inside baseball and fans will devour it. Colletti recalls his career with passion, humor, and telling details.”—Booklist

“An excellent addition to the growing library of sports executive books that will have broad appeal, beyond Dodger fandom.”—Library Journal

“Great book, great stories. . . If you love the game, he’ll take you inside of it.”--ESPN SportsCenter

“[Colletti’s] insider’s perspective of the ups and downs of this process make for revealing reading.” --Christian Science Monitor

“This is not so much a book as it is a late-night barstool chat. Forget love of baseball; the only prerequisite you need for The Big Chair is a thirst for an amusing raconteur.” –Golf Digest, Best of 2017