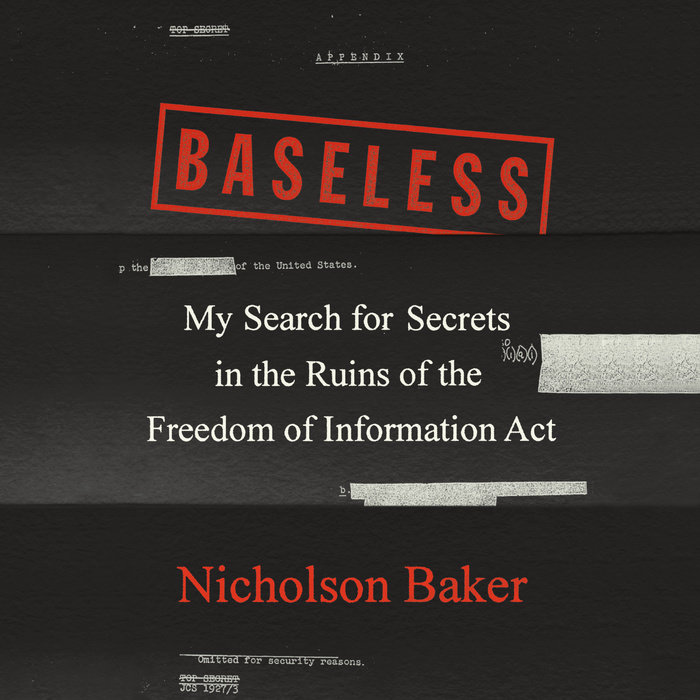 A major new work, a hybrid of history, journalism, and memoir, about the modern Freedom of Information Act—FOIA—and the horrifying, decades-old government misdeeds that it is unable to demystify, from one of America's most celebrated writers

Eight years ago, while investigating the possibility that the United States had used biological weapons in the Korean War, Nicholson Baker requested a series of Air Force documents from the early 1950s under the provisions of the Freedom of Information Act. Years went by, and he got no response. Rather than wait forever, Baker set out to keep a personal journal of what it feels like to try to write about major historical events in a world of pervasive redactions, witheld records, and glacially slow governmental responses. The result is one of the most original and daring works of nonfiction in recent memory, a singular and mesmerizing narrative that tunnels into the history of some of the darkest and most shameful plans and projects of the CIA, the Air Force, and the presidencies of Harry Truman and Dwight Eisenhower.

In his lucid and unassuming style, Baker assembles what he learns, piece by piece, about Project Baseless, a crash Pentagon program begun in the early fifties that aimed to achieve "an Air Force-wide combat capability in biological and chemical warfare at the earliest possible date." Along the way, he unearths stories of balloons carrying crop disease, leaflet bombs filled with feathers, suicidal scientists, leaky centrifuges, paranoid political-warfare tacticians, insane experiments on animals and humans, weaponized ticks, ferocious propaganda battles with China, and cover and deception plans meant to trick the Kremlin into ramping up its germ-warfare program. At the same time, Baker tells the stories of the heroic journalists and lawyers who have devoted their energies to wresting documentary evidence from government repositories, and he shares anecdotes from his daily life in Maine feeding his dogs and watching the morning light gather on the horizon. The result is an astonishing and utterly disarming story about waiting, bureaucracy, the horrors of war, and, above all, the cruel secrets that the United States government seems determined to keep forever from its citizens.
Read More
“But what are chemical weapons and canine cuteness doing together in the same book? The more we hear about Baker’s journeys in government archives and about Cedric and Briney, the clearer it becomes that Baker isn’t just writing about cold war history and transparency. He’s also implicitly posing a set of intertwined questions about life and art: How are we to conceptualize the coexistence of the secrecy-shrouded horrors of modern war with all of our world’s little delights? Can writing help us feel our way toward some answers? . . . Every time Baker swerves from government-funded, classification-shrouded dreams of mass infection to his dogs, he creates a visceral reminder of what should be obvious: that all these phenomena exist in the same world. Our world. This modest-sounding payoff is actually quite startling in practice; again and again, reading Baseless, it hit me like a little electric jolt. This is about more than pointing toward wrongs: there’s a suggestion, too, that we often file these wrongs—and our longstanding uncertainty about them—in the incorrect psycho-cultural boxes, where they become impossible to truly process.” —New York Review of Books

“The book follows a circadian rhythm of file requests, denials, archive visits and attempts at dot-connecting, punctuated by dog walks and Baker’s puttering around his Maine home. That structure gives the book a sweetly personal feel; no book about FOIA may be more accessible to a layperson.” —The Washington Post

“Written with bemused fascination and occasional outrage . . . this lucid yet freewheeling narrative unearths much queasy detail about biological weapons and their promoters. The result is a colorful, engrossing recreation of a sinister history—and a convincing case for opening government archives to public scrutiny.” —Publishers Weekly

“Engaging, bracing, and moving new book . . . Ultimately, what is so compelling about Baseless is not the prosecutorial brief. It’s watching Baker, a thoughtful, sensitive, and vividly expressive soul, grapple with the pathological secrecy of his own government and with the heinousness of what he suspects it has done.” —The New Republic

“Gripping . . . This flowing account reveals the dark side of wartime strategies clouded by denials of FOIA requests. It will fascinate Cold War-era historians and readers concerned about access to government information.” —Library Journal

“Nicholson, a prolific writer and determined pacifist, offers a double thriller of sorts, artfully weaving together two distinct stories . . . Baker is an engaging writer, and Baseless is a gripping book.” —American Scholar

“The leading villains in Baker’s saga, which he aptly describes as ‘a sort of case study, or diary, or daily meditation, on the pathology of government secrecy,’ are the Air Force, Army, and CIA, and his disclosures are rarely banal but rather consistently provocative and disturbing. Using both direct and circumstantial evidence, the author suggests that illegal weapons have been used against North Korea and perhaps against so-called enemy forces in other nations. Readers should be impressed by Baker’s persistence, and most will end up charmed, however obliquely, by his obsessions.” —Kirkus Reviews

“The synchronicity is extraordinary, almost chilling: Nicholson Baker’s gripping diary of his endless attempts to ferret out facts relating to the Pentagon’s top-secret biological weapons programs is published while the whole world is suddenly upended and aghast amid a lethal biological attack of an apparently natural origin. I say apparently natural for as every page of this book is peppered with tales of bizarre weapons—infected feathers, for God’s sake! plague-saturated voles!—you come away doubting everything the US government ever says. And yet, through it all, Baker tells us with a meticulous diarist’s calm about his dogs and the Maine countryside and the birdsong, and you feel, in the end, everything will be alright, and germ-free.” —Simon Winchester, author of The Man Who Loved China and The Professor and the Madman

“A luminous meditation on the power of secrets and mysteries. Baker shows us the ways in which a government shielded by a bodyguard of lies threatens the foundations of democracy.” —Tim Weiner, Pulitzer Prize-winning author of Legacy Of Ashes and The Folly and the Glory

“One of America's most brilliantly creative writers navigates the mirrored labyrinth of government secrecy with a combination of astonishment and rage.  Along the way, he discovers an array of long-hidden terrors while balancing the joys of daily life against the dread that envelops all who confront the reality of covert power.” —Stephen Kinzer, author of Poisoner in Chief: Sidney Gottlieb and the CIA Search for Mind Control
Read More