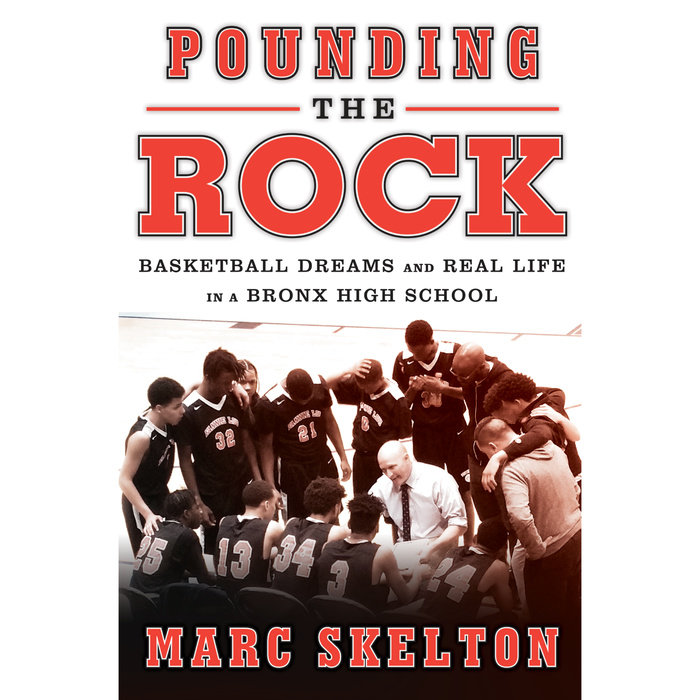 In 2006, the Fannie Lou Hamer Panthers basketball team was 0-18. Since 2007, the year Marc Skelton, a New Hampshire native, took over as head coach, the Panthers' record has been 228-68, and they've won three Public School Athletic League championships and one statewide championship. This tiny 400-student school has become a powerhouse on the basketball court, as well as a public education success story and a symbol of the regeneration of its once blighted neighborhood.
In Pounding the Rock, Marc Skelton tells the thrilling story of the 2016-2017 season, as the Panthers seek to redeem an early exit from the playoffs the year before. But this is far more than a basketball story. It's a profile of a school that, against the odds, educates kids from the poorest congressional district in the country and sends the majority of them to college; of an unusual coach who studies the game with Talmudic intensity, demands as much of himself as he does of his players (a lot), and finds inspiration as much from Melville, Gogol, and Jacob Riis as from John Wooden; and of a squad of young men who battle against difficulties in life every day, and who don't know how to quit.
In a world of all too many downers, Pounding the Rock is one big up, on the court and off. All fans of basketball and of life will rise up and applaud.
Read More
“Inspiring… A complicated, compelling mosaic about sports, education, and America.”
—Men's Journal

“A text full of hope, self-examination, and a profound belief in the young people whom the author coaches and teaches.”
—Kirkus Reviews

“Marc Skelton gives us a chance to understand the value of sports as an integral part of the curriculum in our urban school system. He shows how smaller schools give students the opportunity to be influenced by dedicated coaches and teachers to reach their full potential against stiff odds. Reading this book made me reflect on the great relationships with my former players and the memories we have. Pounding the Rock is excellent.”
—Bob Hurley, coach of St. Anthony’s High School, the subject of the bestselling The Miracle of St. Anthony

“Is Pounding the Rock a book about basketball, being a beloved coach, adolescent boys, education reform, or all of the above? Or is it something else entirely: a good love story that’s hard to put down. What it is, I love it and hated to finish it. It was such a pleasure to keep company with Marc Skelton, his team, and his inspiring colleagues at Fannie Lou Hamer Freedom High School.”
—Deborah Meier, author of The Power of Ideas: Lessons for America from a Small School in Harlem, founder of the Central Park East Secondary School

"Marc Skelton offered a basketball sanctuary in a tiny gym in the Bronx, and his players miraculously became the sanctuary they sought there. His inspiring book Pounding the Rock testifies to the healing power of relationship to elevate kids, stuck in a lethal absence of hope, to a broad-shouldered resilience and the reimagining of their future."
—Gregory Boyle, founder of Homeboy Industries, author of Tattoos on the Heart: The Power of Boundless Compassion.
Read More