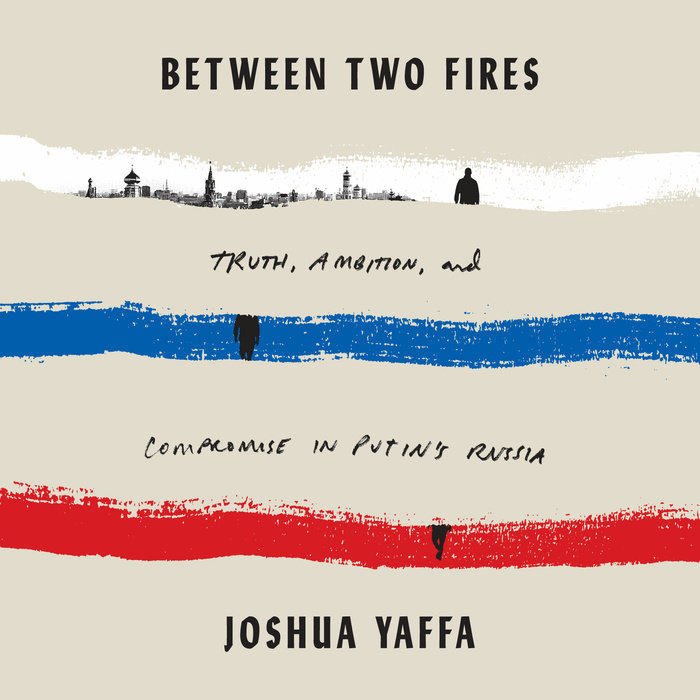 From a Moscow correspondent for The New Yorker, a groundbreaking portrait of modern Russia and the inner struggles of the people who sustain Vladimir Putin’s rule

In this rich and novelistic tour of contemporary Russia, Joshua Yaffa introduces readers to some of the country’s most remarkable figures—from politicians and entrepreneurs to artists and historians—who have built their careers and constructed their identities in the shadow of the Putin system. Torn between their own ambitions and the omnipresent demands of the state, each walks an individual path of compromise. Some muster cunning and cynicism to extract all manner of benefits and privileges from those in power. Others, finding themselves to be less adept, are left broken and demoralized. What binds them together is the tangled web of dilemmas and contradictions they face.

Between Two Fires chronicles the lives of a number of strivers who understand that their dreams are best—or only—realized through varying degrees of cooperation with the Russian government. With sensitivity and depth, Yaffa profiles the director of the country’s main television channel, an Orthodox priest at war with the church hierarchy, a Chechen humanitarian who turns a blind eye to persecutions, and many others. The result is an intimate and probing portrait of a nation that is much discussed yet little understood. By showing how citizens shape their lives around the demands of a capricious and frequently repressive state—as often by choice as under threat of force—Yaffa offers urgent lessons about the true nature of modern authoritarianism.

Praise for Between Two Fires

“A deep and revealing portrait of life inside Vladimir Putin’s Russia. . . . Yaffa mines a rich vein, describing his subjects’ moral compromises and often ingenious ways of engaging a crooked bureaucracy to show how the Kremlin sustains its authoritarianism.”—The New York Times Book Review

“Few journalists have penetrated so deep and with so much nuance into the moral ambiguities of Russia. If you want insight into the deeper distortions the Kremlin causes in people’s psyches this book is invaluable.”—Peter Pomerantsev, author of Nothing Is True and Everything Is Possible

“A stunning chronicle of Putin’s new Russia . . . It celebrates the vitality of the Russian people even as it explores the compromises and accommodations that they must make. . . . This embrace of contradictions is what makes Between Two Fires such a poignant and poetic book.”—Alex Gibney, Air Mail
Read More
“A wonderfully insightful book . . . It is to Mr Yaffa’s credit that in general he avoids simplifying. Even when he describes people who seek cynical advantage from the powerful, the picture is never completely dark; when he portrays moral heroes, he never presents them as infallible. That is how things are in life, perhaps nowhere more so than in Russia.”—The Economist

“A deeply reported account of what it's like to live in Putin's Russia, but it's not about Twitter bots or influencing foreign elections or even Vladimir Putin himself. . . . Yaffa gives us insight into Putin by helping us better understand the political culture that produced him.”—NPR

“Superb . . . [An] excellent new book. . . . Yaffa has distinguished himself with his rigor, his acumen, and his nuanced voice. . . . His in-depth reporting consistently allows him to move beyond the headlines, revealing the deeper historical and sociological patterns that underpin that notoriously contradictory country.”—Foreign Affairs

“Yaffa skilfully weaves together perceptive descriptions of flesh-and-blood people with a balanced evocation of the wider political and historical context. Yaffa has a good eye for colourful detail . . . and he proves attentive to the subtleties and ambiguities of Russian life.”—Tony Wood, Financial Times

“A fascinating and nuanced account that illuminates the myriad conflicting and often contradictory forces that have shaped the Russia of today.”—Douglas Smith, The Wall Street Journal

“[A] highly original and riveting account . . . Good and not-so-good men and women are forced to make difficult choices—and Joshua Yaffa’s remarkable book is a guide to the pain and pleasure of their lives in the public arena.”—Robert Service, Foreign Policy

“Deeply reported and detailed . . . A fascinating exploration into the beliefs and psyches of Russians in many different career fields who reveal their souls to Yaffa, often to a surprising degree but with little apparent fear of reprisal.”—San Francisco Chronicle

“Between Two Fires stands a rank above most publications of its genre because of its effective shoe-leather reporting. Not content with analyzing media coverage or online debates, Yaffa has sought out and interviewed both his central characters and their friends, enemies, and former supporters.”—Greg Afinogenov, Bookforum

“Between Two Fires is a study of compromise, opportunism, and the fraught moral choices available in Putin’s Russia.”—Anne Applebaum, author of Red Famine and Gulag

“In Between Two Fires, Joshua Yaffa brilliantly captures the complex choices and compromises that Russians make to survive, thrive, or remain true to their principles in Putin’s Russia.”—Michael McFaul, former U.S. ambassador to Russia and author of From Cold War to Hot Peace
Read More