home
x
Subscribe
- Random House Audio -
Written By: Erin Brockovich
Read By: Erin Brockovich
22.50
Unabridged Download
-9780593292716 -
*Manufacturerâ€™s Suggested Retail Price. See retailer for details.
Superman's Not Coming
Our National Water Crisis and What We the People Can Do About It 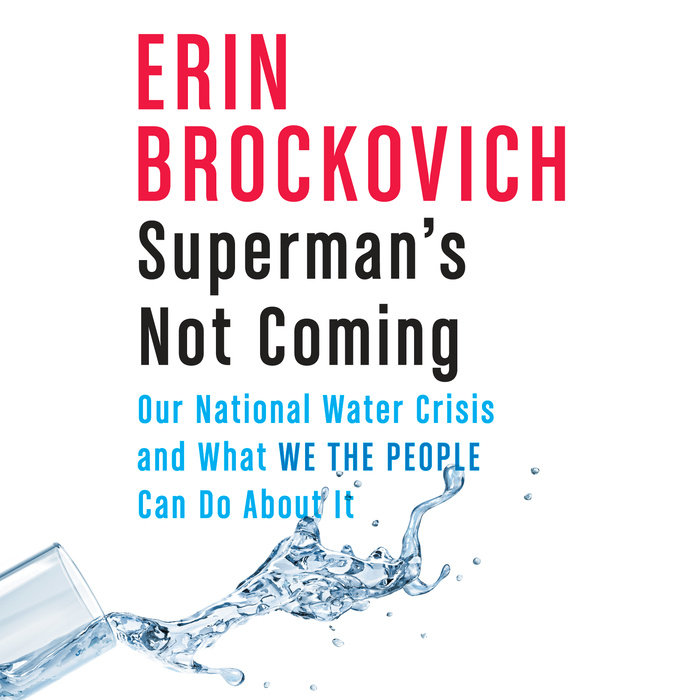 From environmental activist, renowned crusader, champion fighter, maverick—a book that looks at our present situation with water and shows us how we can each take action to make changes in our cities, towns, and villages, before it is too late.

"Brockovich is a vocal, no-nonsense writer--Roberts might even have downplayed her fire in the movie ... The tales she tells show how addressing water issues at the source can make a big difference all the way down the chain."--Heather Hansman, Outside

"Brockovich urges people to continue to fight for what they believe in ... [Her] belief in individual activism--rather than relying on leaders, corporations, or the government to handle the water crisis--is the guiding theme in her new book ... inspirational."--Sam Gillette, People

In Erin Brockovich’s long-awaited book—her first to reckon with conditions on our planet—she makes clear why we are in the trouble we’re in, and how, in large and practical ways, we each can take actions to bring about change.

She shows us what's at stake, and writes of the fraudulent science that disguises these issues, along with cancer clusters not being reported. She writes of the saga of PG&E that continues to this day, and of the communities and people she has worked with who have helped to make an impact. She writes of the water operator in Poughkeepsie, New York, who responded to his customers' concerns and changed his system to create some of the safest water in the country; of the moms in Hannibal, Missouri, who became the first citizens in the nation to file an ordinance prohibiting the use of ammonia in their public drinking water; and about how we can protect our right to clean water by fighting for better enforecement of the laws, new legislation, and better regulations. She cannot fight all battles for all people and gives us the tools to take actions ourselves, have our voices heard, and know that steps are being taken to make sure our water is safe to drink and use.

"The celebrated environmental activist details her continuing fight to keep chemicals out of groundwater, highlighting the stakes and offering advice to concerned citizens."

"Part memoir, part non-fiction report, and part call-to-action--a plea to readers to engage with the water crisis in America because no one else is going to do the work for you."

"A call to action that's likely to have readers checking their own water reports, the book is also a guide to the labyrinthine world of environmental politics."

"Riveting ... Superman's Not Coming will resonate strongly with anyone concerned about this important topic."

"Brockovich shows how bad things are, but she never gives in or despairs. Instead, she wants to educate people about their options, to give them the tools to start asking for changes ... An impeccably researched book that brings science, court cases, depositions, interviews, history, and personal experience to the table to make strong points about the dire state of many of our water systems--and the consequences of it. Brockovich shows how things like suppression of research, intimidation of scientists, manipulated studies, and false scientific articles contribute to perpetuating the problem, and then she discusses what can be done about it ..."

“Two decades after the movie that made her a national celebrity, Brockovich urges readers to confront a scary reality . . . [She] offers an easy-to-understand guide to common water pollutants, and she shares stories of citizen activists . . . The narrative’s real power comes from her clarion calls to regular citizens to get involved in the fight for safe water . . . she offers several concrete suggestions for how people can gauge the safety of their own drinking water and stand up to corporations and politicians . . . a call to arms about the global water crisis from a sharp, plainspoken activist.”
—Kirkus Reviews

On the Podcast: Ger Duany, Erin Brockovich, and Matthew Yglesias