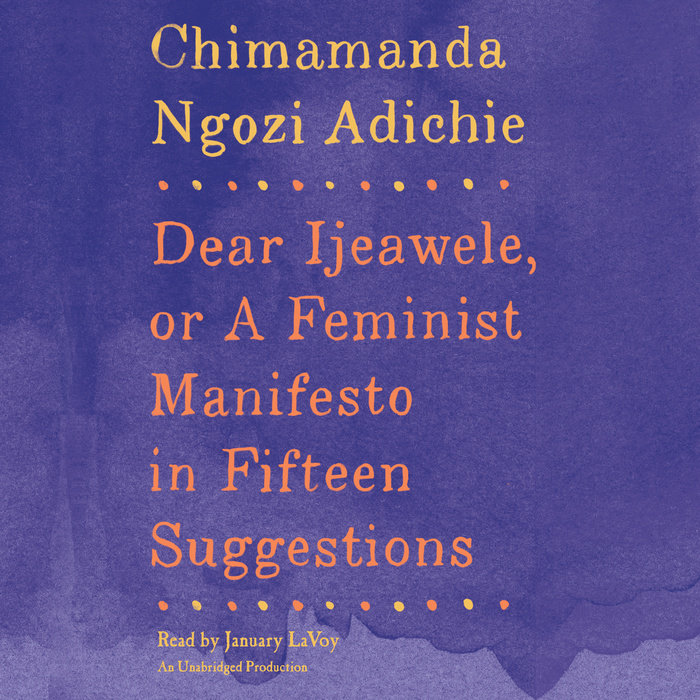 From the best-selling author of Americanah and We Should All Be Feminists comes a powerful new statement about feminism today--written as a letter to a friend.

A few years ago, Chimamanda Ngozi Adichie received a letter from a dear friend from childhood, asking her how to raise her baby girl as a feminist. Dear Ijeawele is Adichie's letter of response.
Here are fifteen invaluable suggestions--compelling, direct, wryly funny, and perceptive--for how to empower a daughter to become a strong, independent woman. From encouraging her to choose a helicopter, and not only a doll, as a toy if she so desires; having open conversations with her about clothes, makeup, and sexuality; debunking the myth that women are somehow biologically arranged to be in the kitchen making dinner, and that men can "allow" women to have full careers, Dear Ijeawele goes right to the heart of sexual politics in the twenty-first century. It will start a new and urgently needed conversation about what it really means to be a woman today.
Read More
“When historians write about feminism in the early 21st century, they may well begin with We Should All Be Feminists, a TED talk Adichie gave in 2012; by the time she published a version as a short book, countless listeners knew her words by heart. This new book is another brief manifesto, and it is easy to imagine her speaking it in the same contralto. Each suggestion starts with an imperative. Some are concrete: ‘Teach Chizalum to read.’ Others are more abstract: ‘Teach her that the idea of “gender roles” is absolute nonsense.’ Embedding us in the intimacy of a friendship, the prose makes reflections that might seem common sense in the abstract feel like discoveries. The form of the letter also enacts what Adichie says is her one fixed beliefs: ‘Feminism is always contextual.’”—Moira Weigel, The New York Times Book Review

“Wise and inspiring. Adichie, who has a daughter of her own, writes from experience in a voice that’s companionable and open. She addresses critical mother-daughter issues such as sex, clothes and makeup, and she espouses an attitude of self-determination when it comes to marriage and career.  Her parental advice will stand the test of time.” —Julie Hale, Book Page

*“Excellent. Adichie shines light on gender issues in modern society through wise advice dispensed with droll wit and deep earnestness. Writing with tender conviction, she explains that to be a feminist, women do not have to give up their femininity. We may choose to be brides, but we should also be taught to be independent; a mother should remain her own person, [not] give up her identity. But it’s not just women learning to navigate the confusing waters of gender identity: Adichie also offers guidance for teaching men how to embrace feminism and reject rigid gender roles, too. VERDICT: A fast read and vital addition to all collections. Anyone interested in social change will enjoy.” —Vanessa Hughes, Library Journal (starred review)

“Raising a next-generation feminist is no small job, but Adichie approaches the task with tenderness in her forthright advice to a friend, Dear Ijeawele. Adichie envisions ways mothers can nurture strong girls, from rejecting traditional gender roles to leading by example (by simply being ‘a full person’). Dear Ijeawele is a volume as fierce and illuminating as bringing up a confident daughter, both with love at their core.” — Jordan Sebastian Bonner, Oprah.com, “2 Books About Being a Woman Everyone Needs to Read”

“Tips on how to raise the next gen to be gender equal. Read it, and then lend it to your friend who just had a kid. It'll take you an hour. And you'll be glad you did.” —­Skimm Reads

“Adichie’s suggestions are logical and stated clearly, full of her dry wit, and range from the obvious (‘Do it together’) to the bold (‘Reject likeability’). The more radical suggestions are the ones that encourage mothers to be complete human beings, not merely ‘hosts.’ And as much as this is a book written to mothers of daughters, fathers of daughters would benefit from reading it, too; parents in general would do well to try to raise children who won't have to grow up and read it at all . . . Powerful and life-affirming, offering wisdom for everyone.” —Nia Hampton, The Village Voice

“Personal and urgent . . . Adichie is passionate about equality. Her new book offers 15 ways that we can encourage girls to be strong, to plant seeds of feminism. But more than that, Adichie hopes the book will help ‘move us toward a world that is more gender equal.’ Doing so means knocking down ingrained assumptions about how men and women think and behave.” —Nora Krug, The Washington Post

“In We Should All Be Feminists, Adichie distilled the essence of feminism into a powerful treatise. Now, in Dear Ijeawele, she goes a step further and covers every feminist topic you can imagine–domestic chores, gendered language, female sexuality, objectification, race, and much more. I am amazed at Adichie’s ability to communicate so effectively and efficiently. If you liked We Should All Be Feminists, you will LOVE Dear Ijeawele.” —Kate Scott, Book Riot, “The Best Books We Read in February”

“Adichie has partly written Dear Ijeawele to reclaim the word feminism from its abusers and misusers. Her advice is not only to provide children with alternatives—to empower boys and girls to understand there is no single way to be—but also to understand that the only universal in this world is difference.  Adichie is a brilliant novelist and a serious thinker, and she is also someone who makes no apology for her own trivial interests. Her understanding of feminism is intertwined with her understanding that we all want to be more than one thing.” —Emma Brockes, The Guardian (UK)
Read More 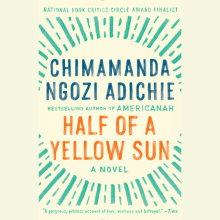 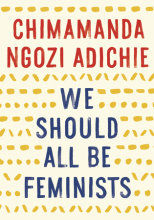