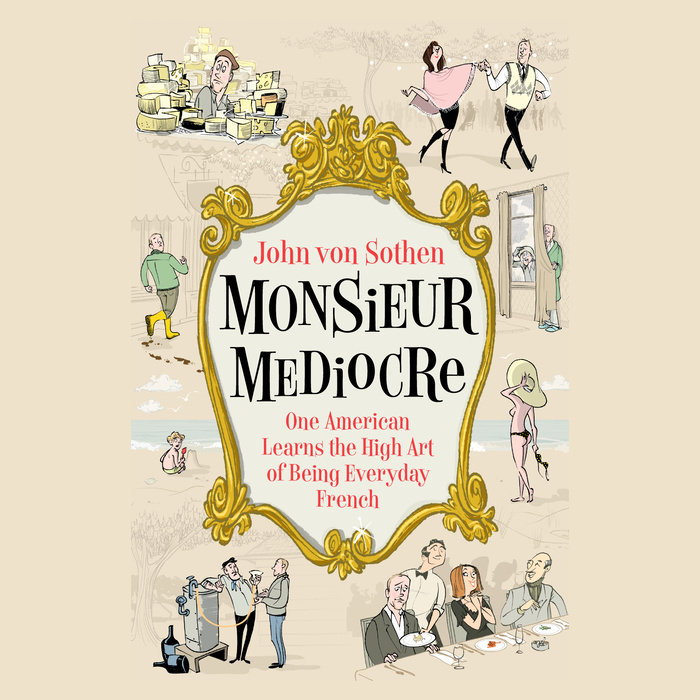 Written by: John von Sothen
Read by: John von Sothen
8 Hours and 48 Minutes Imprint: Penguin Audio Genre: Biography & Autobiography - Personal Memoirs Release Date: May 07, 2019
A hilarious, candid account of what life in France is actually like, from a writer for Vanity Fair and GQ

Americans love to love Paris. We buy books about how the French parent, why French women don't get fat, and how to be Parisian wherever you are. While our work hours increase every year, we think longingly of the six weeks of vacation the French enjoy, imagining them at the seaside in stripes with plates of fruits de mer.

John von Sothen fell in love with Paris through the stories his mother told of her year spent there as a student. And then, after falling for and marrying a French waitress he met in New York, von Sothen moved to Paris. But fifteen years in, he's finally ready to admit his mother's Paris is mostly a fantasy. In this hilarious and delightful collection of essays, von Sothen walks us through real life in Paris--not only myth-busting our Parisian daydreams but also revealing the inimitable and too often invisible pleasures of family life abroad.

Relentlessly funny and full of incisive observations, Monsieur Mediocre is ultimately a love letter to France--to its absurdities, its history, its ideals--but it's a very French love letter: frank, smoky, unsentimental. It is a clear-eyed ode to a beautiful, complex, contradictory country from someone who both eagerly and grudgingly calls it home.
Read More
Named one of the best travel books in the New York Times's "Summer Reading" list

“What do you need to know about the places you’re going? A dozen new books answer this question in strikingly idiosyncratic ways, wreathing their authors’ wanderings in vivid back story—sometimes emotional, sometimes empirical, sometimes imperial—enveloping the reader in a kind of legible Sensurround. These books ought to come with 3-D glasses and a soundtrack. . . . The American writer John von Sothen crushed out on a more universally recognized source of allure, a beautiful Frenchwoman, whom he met in a bistro in Brooklyn at the turn of the millennium. Soon his love for that woman, Anaïs, launched him across the Atlantic to Paris, where he remains today. Monsieur Mediocre records his love affair with France and with Anaïs (whom he married), and his continuing, bumbling attempts to carry off la vie Parisienne with something approaching grace—or, at least, skirting calamity.”
—The New York Times

"This book made me laugh out loud on the subway. J'adore every jaded character, every hilarious insight, and every upended stereotype. Most of all I felt this hum of love—for France, for family, and for life, really—that gives every essay a beguiling depth."
—Maeve Higgins, author of Maeve in America

"Hilarious and touching! We hear often how cultured the French are, how sophisticated, how superior. Expat John von Sothen's Paris is, in his words, 'a mess—a confusing, roiling, weird place.' In other words, it's a lot of fun—not unlike this charming book."
—Ada Calhoun, author of Wedding Toasts I'll Never Give

"I devoured John von Sothen's sharp, funny, and surprisingly tender memoir. A fresh look at a country many know only through a rose-tinted lens."
—Jancee Dunn, author of How Not to Hate Your Husband After Kids

“An entertaining memoir . . . While von Sothen’s vibrant memoir is often humorous, he is also a thoughtful observer of politics and modern family life, including the pain of living far from elderly parents and the unique perspective that comes from being an outsider. As his wife, Anais, tells the author, ‘We critique best what we love the most.’ And that is definitely true for Monsieur Mediocre.”
—BookPage

“Von Sothen is both laugh-out-loud funny and tender, the latter especially in poignant essays about his parents, an artist and a newsman, who had him late in life. The problem, if it can be called one, is that even without fantasy, von Sothen's Paris comes across as pretty fantastic, a vibrant, genuine place he clearly feels lucky to call home.”
—Booklist

"A deft, shrewd, and entertaining take on [von Sothen's] adoptive home, a place far different from how it is conveyed in winsome movies like Amelie and books like Peter Mayle's sun-dappled A Year in Provence. . . . A witty, incisive portrait of contemporary France."
—Kirkus

“Vanity Fair writer von Sothen delights in this wry narrative about the gritty, grumpy realities of being an American adjusting to the Gallic lifestyle . . . With self-deprecating humor, von Sothen wonderfully gives an insider’s take on living life as an outsider.”
—Publishers Weekly