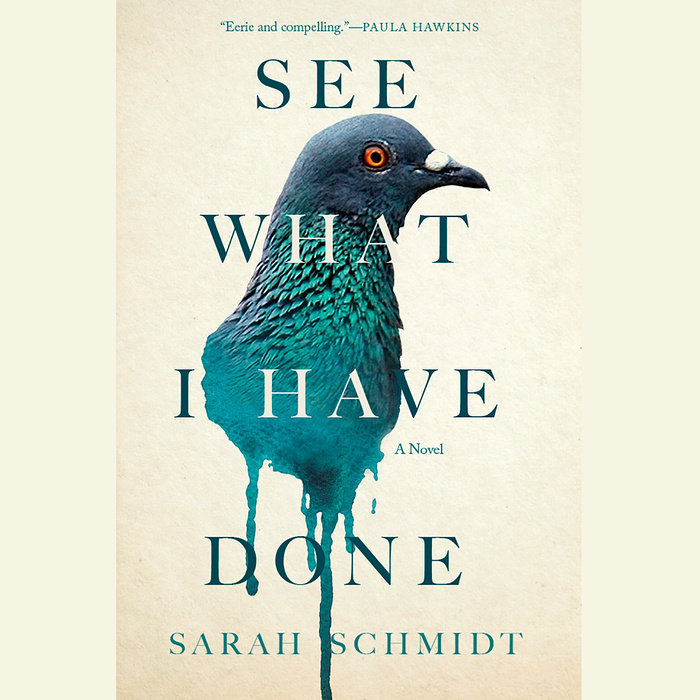 In this riveting debut novel, See What I Have Done, Sarah Schmidt recasts one of the most fascinating murder cases of all time into an intimate story of a volatile household and a family devoid of love.

On the morning of August 4, 1892, Lizzie Borden calls out to her maid: Someone’s killed Father. The brutal ax-murder of Andrew and Abby Borden in their home in Fall River, Massachusetts, leaves little evidence and many unanswered questions. While neighbors struggle to understand why anyone would want to harm the respected Bordens, those close to the family have a different tale to tell―of a father with an explosive temper; a spiteful stepmother; and two spinster sisters, with a bond even stronger than blood, desperate for their independence.

As the police search for clues, Emma comforts an increasingly distraught Lizzie whose memories of that morning flash in scattered fragments. Had she been in the barn or the pear arbor to escape the stifling heat of the house? When did she last speak to her stepmother? Were they really gone and would everything be better now? Shifting among the perspectives of the unreliable Lizzie, her older sister Emma, the housemaid Bridget, and the enigmatic stranger Benjamin, the events of that fateful day are slowly revealed through a high-wire feat of storytelling.
Read More
“Schmidt delves into the Lizzie Borden story, which may or may not have unfolded as we’ve always thought.” ―Entertainment Weekly, one of the 23 Most Anticipated Books of 2017

“Heralds the arrival of a major new talent . . . Nail-biting horror mixes with a quiet, unforgettable power to create a novel readers will stay up all night finishing.” ―Booklist (starred review)

“What better subject for a psychological thriller than one of the most notorious murders in U.S. history . . . A fresh treatment of Lizzie Borden.” ―Library Journal (starred review)

“[A] gory and gripping debut.” ―Guardian

“This novel is like a crazy murdery fever dream, swirling around the day of the murders. Schmidt has written not just a tale of a crime, but a novel of the senses. There is hardly a sentence that goes by without mention of some sensation, whether it’s a smell or a sound or a taste, and it is this complete saturation of the senses that enables the novel to soak into your brain and envelope you in creepy uncomfortableness. It’s a fabulous, unsettling book.” ―Book Riot

“Eerie and compelling, Sarah Schmidt breathes such life into the terrible, twisted tale of Lizzie Borden and her family, she makes it impossible to look away.” ―Paula Hawkins, author of The Girl on the Train

“Sarah Schmidt's beautifully wrought See What I Have Done is a compelling, psychologically rich take on a well-loved tale, bringing new insight into the myth of just who Lizzie Borden was. This glorious gothic novel brings to mind the work of Sarah Waters and Patrick McGrath.” ―Sabina Murray, author of Valiant Gentlemen

“Haunting, evocative and psychologically taut, See What I Have Done breathes fresh life into the infamous 19th-century murder case surrounding Lizzie Borden. This is a powerful, beautifully researched debut novel that brings us into contact with the recurring American dramas of violence and retribution while summoning the beguiling voices of the past.” ―Dominic Smith, author of the New York Times bestseller The Last Painting of Sara de Vos
Read More