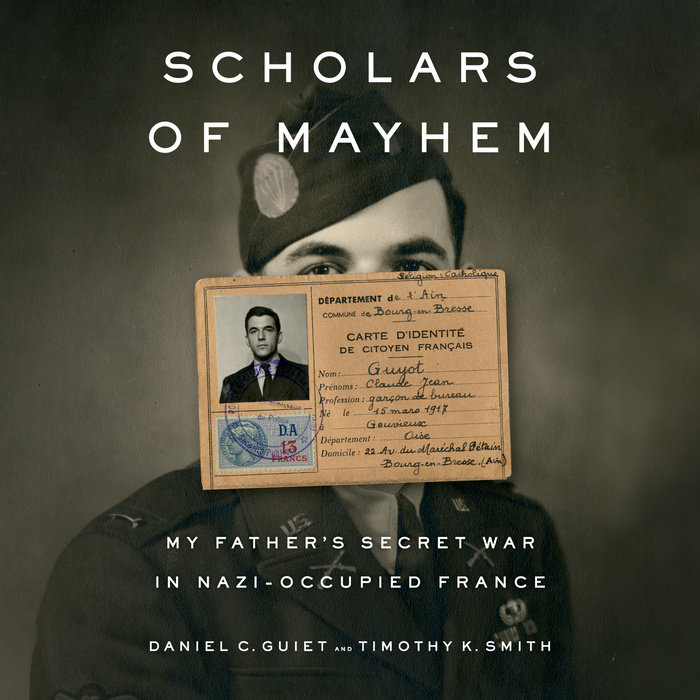 When Daniel Guiet was a child and his family moved country, as they frequently did, his father had one possession, a tin bread box, that always made the trip. Daniel was admonished never to touch the box, but one day he couldn't resist. What he found astonished him: a .45 automatic and five full clips; three slim knives; a length of wire with a wooden handle at each end; thin pieces of paper with random numbers on them; several passports with his father's photograph, each bearing a different name; and silk squares imprinted with different countries' flags, bearing messages in unfamiliar alphabets. The messages, he discovered much later, were variations on a theme: I am an American. Take me to the nearest Allied military office. You will be paid.

Eventually Jean Claude Guiet revealed to his family that he had been in the CIA, but it was only at the very end of his life that he spoke of the mission during World War II that marked the beginning of his career in clandestine service. It is one of the last great untold stories of the war, and Daniel Guiet and his collaborator, the writer Tim Smith, have spent several years bringing it to life. Jean Claude was an American citizen but a child of France, and fluent in the language; he was also extremely bright. The American military was on the lookout for native French speakers to be seconded to a secret British special operations commando operation, dropping saboteurs behind German lines in France to coordinate aid to the French Resistance and lead missions wreaking havoc on Germany's military efforts across the entire country. Jean Claude was recruited, and his life was changed forever. Though the human cost was terrible, the mission succeeded beyond the Allies' wildest dreams.

Scholars of Mayhem tells the story of Jean Claude and the other three agents in his "circuit," codenamed Salesman, a unit of Britain's Special Operations Executive, the secret service ordered by Churchill to "Set Europe ablaze." Parachuted into France the day after D-Day, the Salesman team organized, armed, and commanded a ghostly army of 10,000 French Resistance fighters. National pride has kept the story of SOE in France obscure, but of this there is no doubt: While the Resistance had plenty of heart, it was SOE that gave it teeth and claws. Scholars of Mayhem adds brilliantly to that picture, and further underscores what a close-run thing the success of the Allied breakout from the Normandy landings actually was.

“[A] riveting story . . . A true-life mix of James Bond, Lawrence of Arabia and 'Casablanca,' Jean Claude [Guiet]’s story of resistance and heroism is beautifully told. Scholars of Mayhem packs the punch of an armored division and adds weight to the fresh titles taking on the Normandy landings 75 years after Eisenhower opened the Longest Day.” —Wall Street Journal

“Thrillingly told, with a deep sense of history.” —The National Book Review

“[An] astonishing tale of heroic clandestine work during WWII . . . This well-composed and gripping story contains fresh and illuminating details . . . Scholars of Mayhem lives up to its enticing title. It’s an exciting, informative, and stirring tribute to a heretofore secret war hero’s life.” –Booklist

"A remarkable World War II story of an American within the French Resistance . . . In this page-turning, exciting book, the authors demonstrate an eye for significant details and a strong feel for the players. Any World War II buff will love this tale of heroism." — Kirkus Reviews, Starred Review

"A wonderful account of agents behind enemy lines that reads like a thriller, and a very human story of the discovery of family secrets.” –Robert Gildea, author of Fighters in the Shadows: A New History of the French Revolution

“In Scholars of Mayhem, the authors brilliantly reconstruct the story of the British SOE’s secret war, and First Lieutenant Jean Claude Guiet’s harrowing double-life as a field agent.  It is a riveting tale, beginning with a son’s discovery of the shocking contents of an old bread tin and spinning out to reveal the extraordinary tale of how his father, a French-speaking American soldier, was recruited, trained as a radio operator, and dropped into the savage ground war in Nazi-occupied France.  When the war was over he packed away his guns, transmitting codes, and multiple passports and identity cards. He never spoke of the past, but the nightly terror of being detected and killed never left him. The haunting fate of the lovely Violette, a captured  agent, is a reminder that very few undercover operatives made it home, and their bravery and sacrifice should never be forgotten.” –Jennet Conant, best-selling author of Tuxedo Park and The Irregulars: Roald Dahl and the British Spy Ring in Wartime Washington
Read More