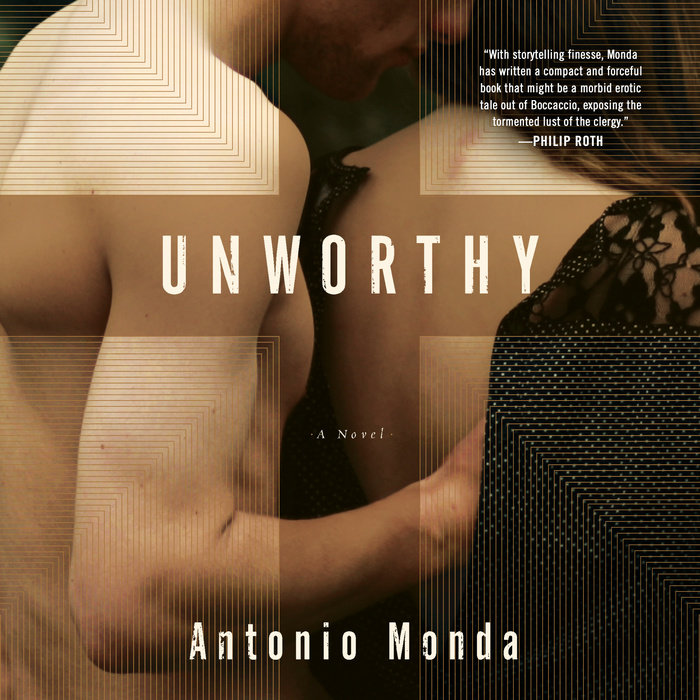 Written by: Antonio Monda
Read by: Michael Crouch
Translated by: John Cullen
4 Hours and 27 Minutes Imprint: Random House Audio Genre: Fiction - Literary Release Date: May 22, 2018
Abram Singer is a Catholic priest with an unusual name and a dark secret. Against the backdrop of gritty 1970s New York, in a simple, straightforward style, he tells us his story. The son of an absent Jewish father and a devout Italian mother, Abram was drawn to the meaningful structure of the seminary, eventually becoming a parish priest in Manhattan. His sincerest wish is to do God’s work, but he is not without human failings: he is irresistibly attracted to women and has a secret lover named Lisa. But when an anonymous letter arrives threatening to expose his liaison, he is forced to decide whether the risks of his sin have become too great. Riveting and powerfully intimate, Unworthy unflinchingly explores the nature of faith, loyalty, and identity—and gives us a timeless portrait of a man trying to make his way in America’s greatest city.
Read More
"A meditation on the contradictions of a calling that demands both a sensitivity to the beauty of God’s creation and the restraint to remain detached from its most intense pleasures."
—The New Yorker

“With elegance, grace, and clarity, Antonio Monda depicts a crisis of faith and longing in New York in the 1970's. This finely-crafted love story captures the swirling contradictions not only of the past, but of the present, too.”
—Colum McCann, author of Thirteen Ways of Looking and Let the Great World Spin

“Antonio Monda’s passionate, singular novel gives us a whiskey priest for the ages. In public, Father Abram Singer ministers tenderly to his parishioners, but he’s secretly drowning in vice. He lies, betrays the innocent, steals from the offertory to buy trinkets for his latest inamorata, but he also sees Jesus in the faces of New York’s most abject poor. This is a moving love story and a dark gaze into the abyss, and I savored every graceful, inspired word. Move over, Graham Greene: Monda in the house.”
—Mary Karr, author of The Liars’ Club and The Art of Memoir

“Antonio Monda has written a striking novel about an unlikely priest, one who is alive with contradictions. This is a beautiful meditation on faith, sex, frailty, and, above all, love.”
—Cathleen Schine, author of The Three Weissmanns of Westport

“In Unworthy, Antonio Monda has miraculously entwined two distinct genres that turn out to unexpectedly and beautifully illuminate each other: the novel of urban nostalgia, in this case for the gritty and often ugly New York of the 1970s, and the memoir of spiritual struggle, which has its roots in St. Augustine’s Memoirs—a work that haunts Monda’s in more ways than one. In his tale of a New York priest struggling to reconcile contradictions that mirror those that are tearing the city itself apart—between exaltation and degradation, spirituality and carnality, selflessness and greed—Monda has given us a novel that explores, with both compassion and rigor, a subject that has been too often neglected: the intellectual and emotional implications of faith.”
—Daniel Mendelsohn, author of An Odyssey: A Father, a Son, and an Epic

"A moving exploration of suffering and happiness and an examination of the shame of sin and the thrill of yearning. Explicit sexual encounters are in stark contrast with eloquent Catholic theological reflections, and the narrator’s lustful musings about his dual existence are dark and complicated. His weakness, so authentically rendered; his longing to be better than his very human impulses; and his raw, conflictful confession all paint an intimate portrait of a man besieged by the tumultuous collision of doctrine and desire."
—Booklist
Read More