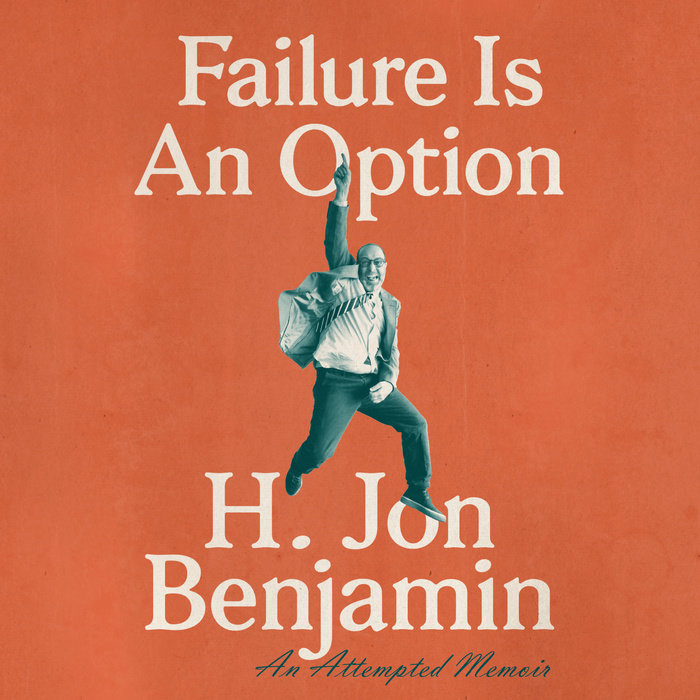 
H. Jon Benjamin—the lead voice behind Archer and Bob's Burgers—helps us all feel a little better about our own failures by sharing his own in a hilarious memoir-ish chronicle of failure.

As Jon himself says, breaking down one's natural ability to succeed is not an easy task, but also not an insurmountable one. Society as we know it is, sadly, failure averse. But more acceptance of failure, as Jon sees it, will go a long way to making this world a different place . . . a kinder, gentler place, where gardens are overgrown and most people stay home with their pets. A vision of failure, but also a vision of freedom.

With stories, examples of artistic and literary failure, and a powerful can't-do attitude, Failure Is an Option is the book the world doesn't need right now but will get regardless.
Read More
“His craft, and what makes him such an inspired and singular voice, is to make it look easy… That it’s decidedly not that easy is part of the gag; writing this funny requires immense talent.”
—AV Club

“It’s that voice … Had me laughing out loud.”
—The New York Times

“Benjamin’s stories run the gamut from personal to professional and will leave you laughing out loud and embracing your own failures.”
—HelloGiggles

“Benjamin’s unique take on the classic ‘fail until you succeed’ self-help industry looks to be as self-deprecating and absurd as his best work.”
—Brightest Young Things

“Irreverent, edgy and hilarious…recommend to all who need a respite from stress and a good laugh.”
—Booklist

“Benjamin is up-front and funny as he recounts his unsuccessful launch of a kids’ late-night TV talk show (tentative title: 'Midnight Pajama Jam') and documents his parental shortcomings (bad idea: babysitting an infant in a video arcade). Yet failure 'doesn’t mean the end of something,' Benjamin writes. 'Often, it’s a springboard toward something better.' He delivers these and other words to live by with concision, wit and a stand-up’s sense of timing.”
—Book Page

"Thank you for sending me a copy of the book."
—Amy Poehler

"Will try and get a quote back to you soon."
—David Cross

Automatic reply: Anderson is out of his office from December 21-22. For urgent requests, please email [redacted].
—Anderson Cooper

"Dream big and tomorrow will be brighter."
—Quotes.com

"Believe in yourself and others will follow."
—Inspirationalquotes.com
Read More