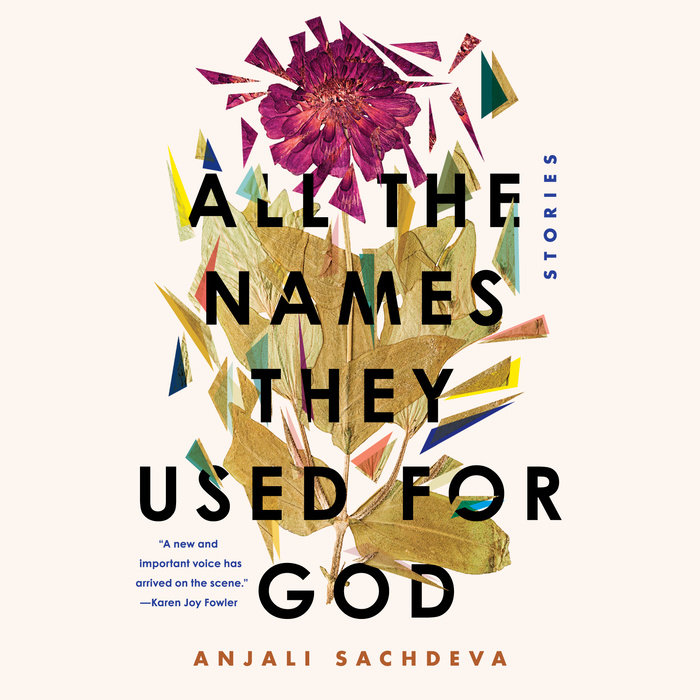 Spanning centuries, continents, and a diverse set of characters, these alluringly strange stories are united by each character’s struggle with fate. In a secret, subterranean world beneath the prairie of the Old West, a homesteader risks her life in search of a safe haven. A workman in Andrew Carnegie’s steel mills is turned into a medical oddity by the brutal power of the furnaces—and is eventually revitalized by his condition. A young woman created through genetic manipulation is destroyed by the same force that gave her life.

With her distinctive blend of magical realism, science, and poetic prose, Anjali Sachdeva demonstrates a preternatural ability to laser in on our fears, our hopes, and our longings in order to point out intrinsic truths about society and humanity. “Killer of Kings” starts with John Milton writing Paradise Lost and questions the very nature of power—and the ability to see any hero as a tyrant with just a change in perspective. The title story presents a stirring imagining of the aftermath of the kidnapping of Nigerian schoolgirls by Boko Haram that leaves us pondering what is lost when we survive the unsurvivable.

Like many of us, the characters in this collection are in pursuit of the sublime, and find themselves looking not just to divinity but to science, nature, psychology, and industry, forgetting that their new, logical deities are no more trustworthy than the tempestuous gods of the olden days. Along the way, they walk the knife-edge between wonder and terror, salvation and destruction. All the Names They Used for God is an entrancing work of speculative fiction that heralds Anjali Sachdeva as an invigorating, incomparable new voice.


“So rich they read like dreams—or, more often, nightmares—the nine stories in Sachdeva’s otherworldly debut center upon the unforgiving forces that determine the shape of our lives, as glorious as they are brutal. . . . These modern forces are as vast and incomprehensible as any gods. . . . [The stories] span time, space, and logic: Nigeria and New Hampshire, the past and the future, realism and science fiction. And yet, for all its scope, it is a strikingly unified collection, with each story reading like a poem, or a fable. . . . They are enormous stories, not in length but in ambition, each an entirely new, unsparing world. Beautiful, draining—and entirely unforgettable.”—Kirkus Reviews (starred review)
Read More
“What an outstanding short story collection. I knew nothing about this book going in and was thrilled by each story. There is so much range here, and there is a nice fabulist edge to nearly all the stories. The writer wields so much confidence and control in her prose and, my goodness, what imagination, what passion there is in this work. From one story to the next I felt like the writer knows everything about everything.”—Roxane Gay, author of Bad Feminist and Hunger

“Fuses science, myth, and imagination into a dark and gorgeous series of questions about our current predicaments.”—Anthony Doerr, author of All the Light We Cannot See

“Delightfully unexpected . . . The strange and wonderful stories that make up [Anjali] Sachdeva’s debut begin on this side of reality and slip to the other—often so gracefully, and with such a precise rendering of the fantastical, that we become inadvertent believers. ‘The World by Night’ plunges us into a cave beneath a prairie, where Sadie, an abandoned albino bride, finds herself seduced by a dark and glittering world populated by elusive creatures like herself. ‘Glass-Lung’ begins with a furnace accident in a Pennsylvania steel mill; its only survivor clings to life with the help of his eight-year-old daughter, who, in the kind of surprising shift typical of these stories, ends up working in a museum as the secretary to an archaeologist, then serving as the archaeologist’s assistant on a search for an Egyptian tomb. . . . The brilliance of these stories—beyond the cool, precise artistry of their prose—is their embrace of both the known and the unknown, in a combination that feels truly original.”—The New York Times Book Review

“Terrific . . . [Anjali] Sachdeva’s book, a debut, is notable for its exuberant variety. . . . The range of her gifts is best seen in the title story, about two young women who are forced to become child brides to Islamists but gradually turn the tables on their captors through the practice of mind control. . . . The story’s delicate sadness mingles beautifully with the boldness of its conception.”—The Wall Street Journal

“Each of these stories is a perfect diorama: scrupulously assembled, complex, unsettling. Completing one is like having lived an entire life, and then being born, breathless, into another.”—Carmen Maria Machado, author of Her Body and Other Parties

“Emotionally scorching . . . artfully deployed . . . a wide-ranging collection of stories that are a blend of fact and fiction, seamlessly integrating magical realism and the firmly earthbound . . . a strong collection from start to finish.”—BookPage

“Sachdeva’s stories almost seem to revel in their diversity; the book has surprises on virtually every page and touches on a host of philosophical and technological questions. . . . Science fiction has always been at its strongest when working exactly this kind of combination, and Sachdeva’s first attempts at it are remarkable.”—The Christian Science Monitor
Read More