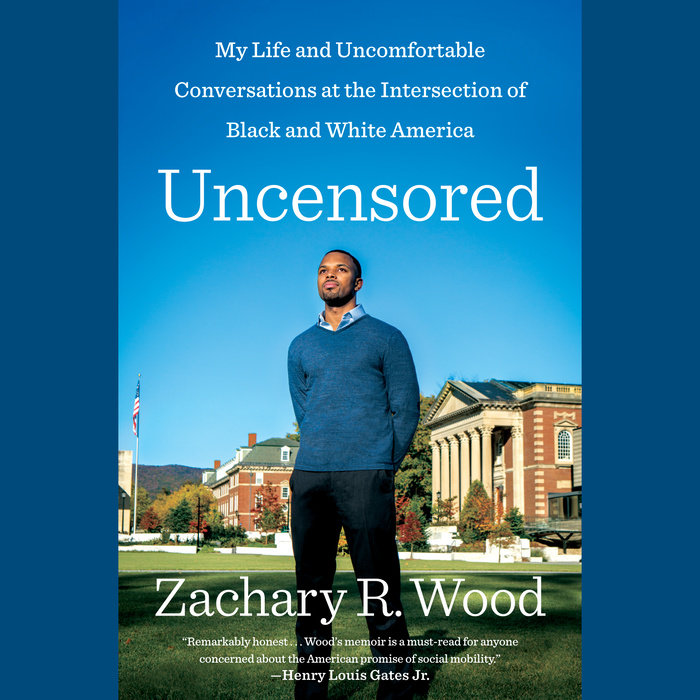 As the former president of the student group Uncomfortable Learning at his alma mater, Williams College, Zachary Wood knows from experience about intellectual controversy. At school and beyond, there's no one Zach refuses to engage with simply because he disagrees with their beliefs—sometimes vehemently so—and this view has given him a unique platform in the media.

But Zach has never shared the details of his own personal story. In Uncensored, he reveals for the first time how he grew up poor and black in Washington, DC, where the only way to survive was by resisting the urge to write people off because of their backgrounds and perspectives. By sharing his troubled upbringing—from a difficult early childhood to the struggles of code switching between his home and his elite private school—Zach makes a compelling argument for a new way of interacting with others and presents a new outlook on society's most difficult conversations.
Read More
“In this remarkably honest memoir, Zachary R. Wood has written a veritable bildungsroman, tracing his journey from high school scholarship student from a poor black neighborhood in Washington, DC, to leader of the free speech movement at Williams College. This work provides a timely view of both political life on elite college campuses and the struggles of the working poor against the backdrop of institutional racism. It also explores, with bracing candor, Wood’s growth as a young writer and intellectual, whose mistakes are as formative as his successes. Wood’s memoir is a must-read for anyone concerned about the American promise of social mobility.”—Henry Louis Gates Jr., Alphonse Fletcher University Professor at Harvard University and author of Life Upon These Shores

“I met Zachary Wood when he was nineteen. After an hour of talking with him, I was volunteering for his (future) U.S. presidential campaign. (I have my fingers crossed that he’ll decide to run someday, because we need him.) Zachary Wood represents everyone, and he does so with dignity, clarity, kindness, and great courage, which comes across loud and clear in this phenomenal book, Uncensored. Zachary’s story of resilience, compassion, and conviction will be read by millions, and I’ll be pushing for it to be a book that’s assigned in high school classrooms everywhere. He teaches—and shows—us how to resolve and heal some of our deepest conflict—with true curiosity, empathy, and openness.”—Amy Cuddy, New York Times bestselling author of Presence

“An intensely personal memoir about a childhood that trained [Wood] to be nimble and empathetic.”—Chicago Tribune

“Wood is a cerebral analyst . . . an effective translator of the two worlds he navigates—four worlds, really, rich and poor as notable as black and white.”—The Christian Science Monitor

"[Wood] writes frankly—and with unfiltered language—of challenges both at home and at elite private schools in Michigan and DC."—World

"One cannot help but root for Wood while reading his life story . . . [and] conservatives would do well to emulate how Wood approaches the issues: listening, reflecting, and debating."—The College Fix

“Wood writes movingly about the debilitating effects of racism and poverty. . . . A singular voice that, as Wood would say, you may not agree with but to which you at least have to listen.”—Booklist

“Uncensored is inspired. Zachary Wood is an American hero for standing up on the front line of the fight for free speech on college campuses. This young, black man who has overcome so much in his life, tells an incredible story of crossing political lines in search of honest debate.”
—Juan Williams, author of Eyes on the Prize and political analyst for Fox News

“It is difficult to know what is more amazing, the fact that a twenty-one-year-old is publishing a memoir of his life, the fact that he indeed has a life and a complicated one to narrate, or the fact that out of hardscrabble beginnings he has fashioned a present full of accomplishment and promises a future that the reader soon comes to believe in. He thinks he will be president of the United States. I wouldn’t bet against him.”—Stanley Fish, New York Times bestselling author of How to Write a Sentence

“A spectacular debut from an impressive individual who has already been and will continue to be a force for the good and for the Republic. Republicans and Democrats alike can learn something from Zachary Wood’s story, and it may not be what you expect to learn. Mr. Wood, I suspect, would be more than happy with that.”—Allison Stanger, Russell J. Leng ’60 Professor of International Politics and Economics at Middlebury College

"Candid, passionate, disturbing, and judicious, Zachary Wood’s Uncensored traces a young man’s odyssey through the challenges and affirmations of family life, academic institutions, and campus controversies.  Ambitious and altruistic, admired and maligned, driven yet self-reflective, Wood examines and celebrates the sense of calling that informs his prodigious energy and talent.  Uncensored is an honest, compelling, and unforgettable book."
—David Lionel Smith, John W. Chandler Professor of English at Williams College

"There is nothing predictable or even familiar about this astonishing memoir by Zachary Wood, despite its components of race and class. It's a work alternately harrowing and exhilarating in its unflinching detail of survival—its picture of a child waking in daily fear wondering what the day with his mentally ill mother will bring. The exhilaration comes with Mr. Wood's sterling command of his narrative, which is impossible to put down once begun. Its author began reading at a very early age and never stopped. His story is, in addition to all else, profound and eloquent testimony to books and reading and their power to make a life."—Dorothy Rabinowitz, author of No Crueler Tyrannies
Read More