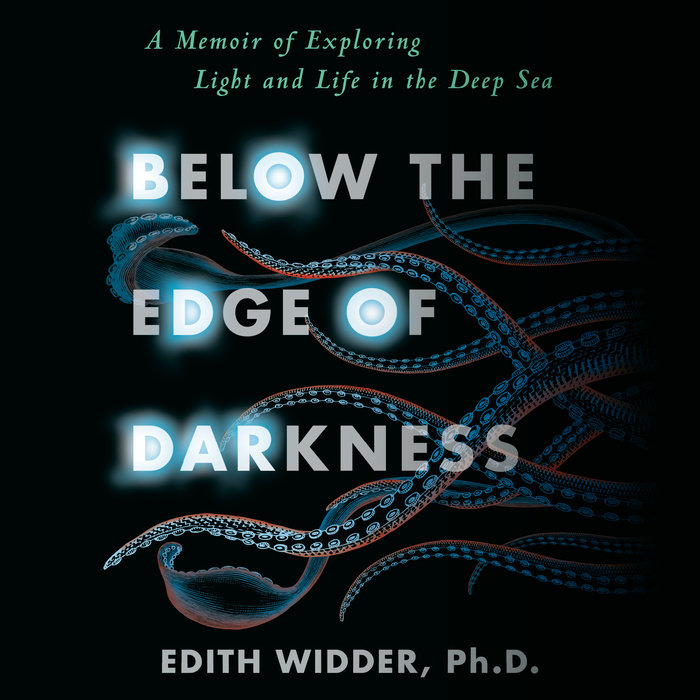 Written by: Edith Widder, Ph.D.
Read by: Allyson Ryan
11 Hours and 56 Minutes Imprint: Random House Audio Genre: Biography & Autobiography - Environmentalists & Naturalists Release Date: July 27, 2021
A pioneering marine biologist takes us down into the deep ocean to understand bioluminescence—the language of light that helps life communicate in the darkness—and what it tells us about the future of life on Earth in this “thrilling blend of hard science and high adventure” (The New York Times Book Review).

NAMED ONE OF THE BEST BOOKS OF THE YEAR BY BOOKLIST • “Edith Widder’s story is one of hardscrabble optimism, two-fisted exploration, and groundbreaking research. She’s done things I dream of doing.”—James Cameron

Edith Widder’s childhood dream of becoming a marine biologist was almost derailed in college, when complications from a surgery gone wrong caused temporary blindness. A new reality of shifting shadows drew her fascination to the power of light—as well as the importance of optimism.

As her vision cleared, Widder found the intersection of her two passions in oceanic bioluminescence, a little-explored scientific field within Earth’s last great unknown frontier: the deep ocean. With little promise of funding or employment, she leaped at the first opportunity to train as a submersible pilot and dove into the darkness.

Widder’s first journey into the deep ocean, in a diving suit that resembled a suit of armor, took her to a depth of eight hundred feet. She turned off the lights and witnessed breathtaking underwater fireworks: explosions of bioluminescent activity. Concerns about her future career vanished. She only wanted to know one thing: Why was there so much light down there?

Below the Edge of Darkness takes readers deep into our planet’s oceans as Widder pursues her questions about one of the most important and widely used forms of communication in nature. In the process, she reveals hidden worlds and a dazzling menagerie of behaviors and animals, from microbes to leviathans, many never before seen or, like the legendary giant squid, never before filmed in their deep-sea lairs. Alongside Widder, we experience life-and-death equipment malfunctions and witness breakthroughs in technology and understanding, all set against a growing awareness of the deteriorating health of our largest and least understood ecosystem.

A thrilling adventure story as well as a scientific revelation, Below the Edge of Darkness reckons with the complicated and sometimes dangerous realities of exploration. Widder shows us how when we push our boundaries and expand our worlds, discovery and wonder follow. These are the ultimate keys to the ocean’s salvation—and thus to our future on this planet.
Read More
“Gripping . . . Widder’s voice is in turns jaunty, precise and nerdily quippy. . . . The prose glints. . . . Widder [has] worked hard to bring the abyss to light. It is our duty, as clumsy land-bound dwellers of a water planet, to look, and to remember.”—The New York Times Book Review

“Edith Widder’s story is one of hardscrabble optimism, two-fisted exploration, and groundbreaking research. She’s done things I dream of doing. I’d have wrapped my submersible, the Deepsea Challenger, in bacon if it would have lured the elusive giant squid from the depths. In Below the Edge of Darkness, Widder tells you how she did it.”—James Cameron

“My experience of exploring the deep ocean and its alien life with Edie Widder was fabulous. She enthralls us with many such stories in her book. I recommend it.”—Ray Dalio

“To shed light on a subject is what any scientific book should do. To go into it in depth without losing the reader is a harder task. Edith Widder’s subject is light itself—the manufacture of light by strange and eerie denizens of the deep sea—and her scintillating style is worthy of the topic. This is a book to delight the general reader while simultaneously informing the professional: a book of marvels, marvelously written.”—Richard Dawkins, New York Times bestselling author of The God Delusion

“Personal and page-turning, adventurous and awe-inspiring, Below the Edge of Darkness sparkles with the thrill of exploration and glows with an urgent plea for the future of our precious seas. Comparisons to Jacques Cousteau spring to mind as Edith Widder shares the profound journey of her life—one as unique and important as the unexplored realms of our very own planet.”—Juli Berwald, author of Spineless: The Science of Jellyfish and the Art of Growing a Backbone

“‘Luminous’—the topic, the heroic journey, and the author herself. Dive in with Edith Widder, trailblazing scientist and explorer, as she reveals the galaxy of light and life in the universe below the surface of the sea, out-shining skeptical male colleagues with dignity, grace and a robust sense of humor.”—Sylvia Earle, National Geographic explorer in residence, founder of Mission Blue
Read More