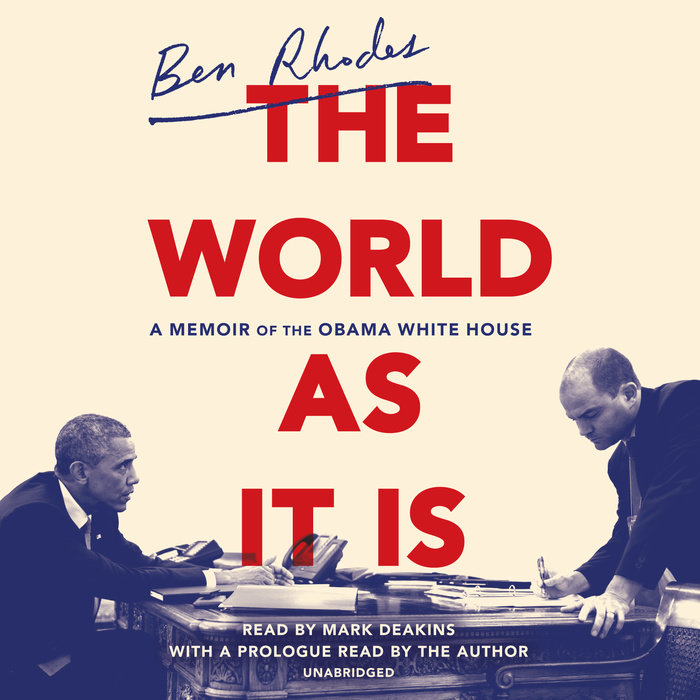 For nearly ten years, Ben Rhodes saw almost everything that happened at the center of the Obama administration—first as a speechwriter, then as deputy national security advisor, and finally as a multipurpose aide and close collaborator. He started every morning in the Oval Office with the President’s Daily Briefing, traveled the world with Obama, and was at the center of some of the most consequential and controversial moments of the presidency. Now he tells the full story of his partnership—and, ultimately, friendship—with a man who also happened to be a historic president of the United States.

Rhodes was not your typical presidential confidant, and this is not your typical White House memoir. Rendered in vivid, novelistic detail by someone who was a writer before he was a staffer, this is a rare look inside the most poignant, tense, and consequential moments of the Obama presidency—waiting out the bin Laden raid in the Situation Room, responding to the Arab Spring, reaching a nuclear agreement with Iran, leading secret negotiations with the Cuban government to normalize relations, and confronting the resurgence of nationalism and nativism that culminated in the election of Donald Trump.

In The World as It Is, Rhodes shows what it was like to be there—from the early days of the Obama campaign to the final hours of the presidency. It is a story populated by such characters as Susan Rice, Samantha Power, Hillary Clinton, Bob Gates, and—above all—Barack Obama, who comes to life on the page in moments of great urgency and disarming intimacy. This is the most vivid portrayal yet of Obama’s worldview and presidency, a chronicle of a political education by a writer of enormous talent, and an essential record of the forces that shaped the last decade.

Read by Mark Deakins. Prologue read by the author.

Advance praise for The World as It Is

“Ben Rhodes is one of the most brilliant minds and powerful storytellers I've ever known. In The World as It Is, he doesn't just bring you inside the room for key moments of Obama's presidency, he captivates you with the journey of an idealistic young staffer who becomes the president's closest friend and advisor—a journey that both cynics and believers will find riveting and hopeful.”—Jon Favreau

Read More
“Ben Rhodes, who served Barack Obama as a foreign policy adviser and speechwriter from beginning to end, has written a book that reflects the president he served—intelligent, amiable, compelling and principled. And there is something more: The World as It Is is a classic coming-of-age story, about the journey from idealism to realism, told with candor and immediacy. It is not a heavy policy book. There are anecdotes galore, but they illuminate rather than scandalize. Even Donald Trump—a politician who seems the omega to Obama’s alpha—is treated with horrified amazement rather than vitriol. . . . Ben Rhodes is a charming and humble guide through an unprecedented presidency. . . . He never quite loses his idealism; in a crass political era, he impressively avoids becoming a cynic. . . . His achievement is rare for a political memoir: He has written a humane and honorable book.”—Joe Klein, The New York Times Book Review

“In The World as It Is, Rhodes shows no trace of the disillusionment that gave George Stephanopoulos’s tale of Bill Clinton its bitter, gossipy flavor, or of the light irony that came to inflect Peggy Noonan’s adoration of Ronald Reagan. More than any other White House memoirist, Rhodes is a creature of the man he served. . . . This is the closest view of Obama we’re likely to get until he publishes his own memoir.”—George Packer, The New Yorker

“The World as It Is offers a peek into Mr. Obama’s tightly sealed inner sanctum from the perspective of one of the few people who saw him up close through all eight years of his presidency. Few moments shook Mr. Obama more than the decision by voters to replace him with a candidate who had questioned his very birth.”—Peter Baker, The New York Times

“The World As It Is opens and closes with Obama’s reaction to the election of Donald Trump. In between, it recounts world events in a newsy, intimate chronology.”—Karl Vick, Time

“For insight on that Obama playbook, it makes sense to consult Ben Rhodes’s fine new memoir of the Obama years. . . . Rhodes was ‘in the room’ for almost every foreign policy decision of significance that Obama made during his eight years in office and in a privileged position to chronicle how the idealism of the early Obama administration faded as it confronted the realities of an often-Hobbesian world.”—Peter Bergen, CNN

“Ben Rhodes is one of the most brilliant minds and powerful storytellers I’ve ever known. In The World as It Is, he doesn’t just bring you inside the room for the key moments of Obama’s presidency, he captivates you with the journey of an idealistic young staffer who becomes the president’s close friend and advisor—a journey that both cynics and believers will find riveting and hopeful.”—Jon Favreau

“The World as It Is is a page-turning, unfiltered, altogether human look at Barack Obama’s presidency. Ben Rhodes—one of Obama’s closest and most important advisors—opens up the defining issues of the presidency, from the role of race and the rise of conspiracy theories to the hunt for bin Laden, the Syria ‘red line’ debate, and the secret negotiations Ben himself led to normalize ties with Cuba. Insightful, funny, and moving, this is a beautifully observed, essential record of what it was like to be there.”—Samantha Power
Read More