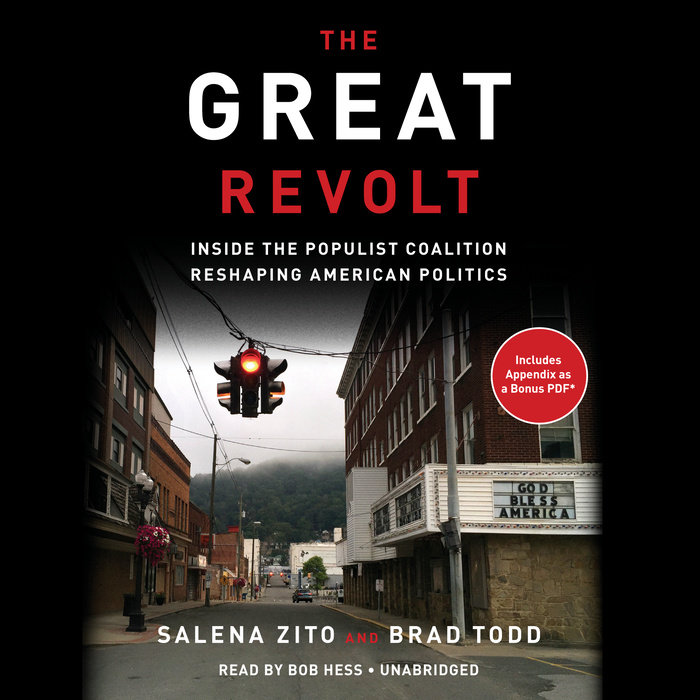 Written by: Salena Zito & Brad Todd
Read by: Bob Hess
11 Hours and 6 Minutes Imprint: Random House Audio Genre: Political Science - Political Process - Campaigns & Elections Release Date: May 08, 2018
Standout syndicated columnist and CNN contributor Salena Zito, with veteran Republican strategist Brad Todd, reports across five swing states and over 27,000 miles to answer the pressing question: Was Donald Trump's election a fluke or did it represent a fundamental shift in the electorate that will have repercussions--for Republicans and Democrats--for years to come.

The history of the American electorate is not a litany of flukes; instead it is a pattern of tectonic plate-grinding, punctuated by a landscape-altering earthquake every generation or so. Donald Trump's electoral coalition is smashing both American political parties and its previously impenetrable political news media. The political experts called the 2016 election wrong and in the wake of the 2016 election surprise, the experts have continued to blow it -- looking to predict the coming demise of the President without pausing to consider the durability of the trends and winds that swept him into office.

The Great Revolt delves deep into the minds and hearts of the voters the make up this coalition. What emerges is a group of citizens who cannot be described by terms like "angry," "male," "rural," or the often-used "racist." They span job descriptions, income brackets, education levels, and party allegiances. What unites them is their desire to be part of a movement larger than themselves that puts pragmatism before ideology, localism before globalism, and demands the respect it deserve from Washington.

Zito and Todd have traveled on over 27,000 miles of country roads to interview more than 300 Trump voters in 10 swing counties. What they have discovered is that these voters were hiding in plain sight -- ignored by both parties, the media, and the political experts all at once, ready to unite into the movement that spawned the greatest upset in recent electoral history. Deeply rooted in the culture of these Midwestern swing states, Zito and Brad Todd reframe the discussion of the "Trump voter" to answer the question: What next?


Includes a bonus PDF of the Appendix
Read More
“Salena Zito is unique: a truth-telling reporter who found the America that elected Donald Trump. She listened to them. Understands them. Respects them. Not only did she get the election right, but by employing the lost art of shoe-leather journalism, she uncovered an amazing national political realignment that was—and still is—completely invisible to the Wizards of Smart who inhabit our distant capital. Whenever I see her byline, I stop and read. I know it will be that good. You should, too. Don’t doubt me.” —Rush Limbaugh

“While Donald Trump's election shocked the Washington establishment, Salena Zito and Brad Todd show that his coalition was hidden in plain sight. Far from a ‘basket of deplorables,’ they're the forgotten men and women of America, people who work with their hands and on their feet, and who want a government that rewards their work and respects their communities. Zito and Todd tell their story, and anyone interested in American politics would do well to listen.” —Senator Tom Cotton

“Salena Zito picked up on a political phenomenon long before polls or pundits had any idea of what was happening. Her drives from Pittsburgh to Cleveland opened her eyes about the rise of Trump and her shoe leather reporting and skills as a journalist helped her understand why. Her voice channeling and explaining these voters is invaluable for the Trump era.” —Jake Tapper

“If you want a fuller understanding of the political moment we’re in, and you should, you read Salena Zito. I mean this both literally and seriously.” —Peggy Noonan

"People struggling to understand what is happening in American politics would do well to read this fascinating book co-written by one of the first journalists to see what was happening to a key slice of the electorate — the white working class in the upper Midwest." —The Associated Press

"A delicious mix of quantitative and qualitative data analysis regarding the 2016 election cycle." —The Federalist

"Syndicated columnist Salena Zito and GOP strategist Brad Todd find well-educated voters were more likely to shift left if they lived in communities that had disproportionately high levels of education...Zito and Todd argue that disparity is evidence that social pressures are driving both groups toward political homogeny." —The Hill

"Reading the words of the farmers, gun-toting women, former union bosses and others who found their way to Trump, you get the feeling that Zito's and Todd's blue-collar, flyover country roots opened doors and hearts that might have remained closed to some big city reporters. The revealing conversations peel back the layers of a complicated American onion." —Courier Journal

"Ms. Zito and Mr. Todd have done a service by portraying Trump Nation in a way that goes beyond either academic data-crunching or breathless coverage of presidential rallies." —Pittsburgh Post-Gazette

“Empathy might be what Zito and Todd convey best, profiling voters in Iowa, Pennsylvania, Ohio, Michigan, and Wisconsin to bring President Trump’s oft-misunderstood coalition to life. Relying on survey data, Zito and Todd outline seven archetypes of the ‘most surprising’ voters Trump attracted, fleshing out each category with compelling voter interviews that make the numbers easier to understand.” —Washington Examiner

“Most of the national pundit class has tried to explain the rise of Trump voters by pointing to racism, or economic resentment, or racism, or cultural change, or even, you know, racism as an explanation. But Salena Zito and Brad Todd tried something different: They went to those voters and asked them….in two ways: Face to face, in a series of deep and sensitive interviews, and en masse in a large opinion survey. Both inquiries produced a lot of useful material that both Democrats and Republicans would be well advised to study and internalize.” —USA Today

“Key reading for Democrats…The authors paint a portrait of Trump’s base that is not standard GOP-issue, and a Democratic partly overly reliant upon its upstairs-downstairs bicoastal coalition.” —The Guardian

"A valuable read...Unlike most retellings of the 2016 election, The Great Revolt provides a cohesive, non-wide-eyed argument about where the Republican Party could be headed." —The Atlantic

"[A] probing work of political reporting mixed with quantitative research and trenchant analysis.” —The American Conservative

"A story almost as big but yet to be told is a true assessment of the people who made someone distinctly unlike them in many ways — but so akin to them in others — the next president of the United States." —The Winchester Star

"One can’t help but to come away from reading The Great Revolt without feeling that the clash of communities reflected in the narratives did not end on Election Night 2016.” —RealClearPolitics

"The Great Revolt is a must read for anyone who wants to understand the Trump phenomenon and its potential to reshape the course of American politics.” —Commercial Appeal

“The mighty Trump voter gets some significant analysis...revealing the authentic spirit and iron-willed determination of some 63 million voters who brought President Trump victory” —Washington Times

“The Great Revolt features profiles of Trump voters, polling data and an examination of the votes. It is chock full of fascinating detail and insightful interviews with Trump voters.” —Knoxville News-Sentinel

"Reading the words of the farmers, gun-toting women, former union bosses and others who found their way to Trump, you get the feeling that Zito’s and Todd’s blue-collar, flyover country roots opened doors and hearts that might have remained closed to some big city reporters.” —Bowling Green Daily News

"The Great Revolt astutely breaks down Trump’s coalition and brings to life its motivation." —The Clarion-Ledger

"Zito and Todd show a keen understanding of voter sentiment and do not condescend to their subjects. White working-class swing voters have generally been characterized as resentful, ignorant, and often racist, but Zito and Todd describe thoughtful men and women who made a deliberate and sometimes fraught decision to support Trump." —City Journal

"Ms. Zito and Mr. Todd have given some pivotal Trump voters a better opportunity to be understood." —The Garden City News