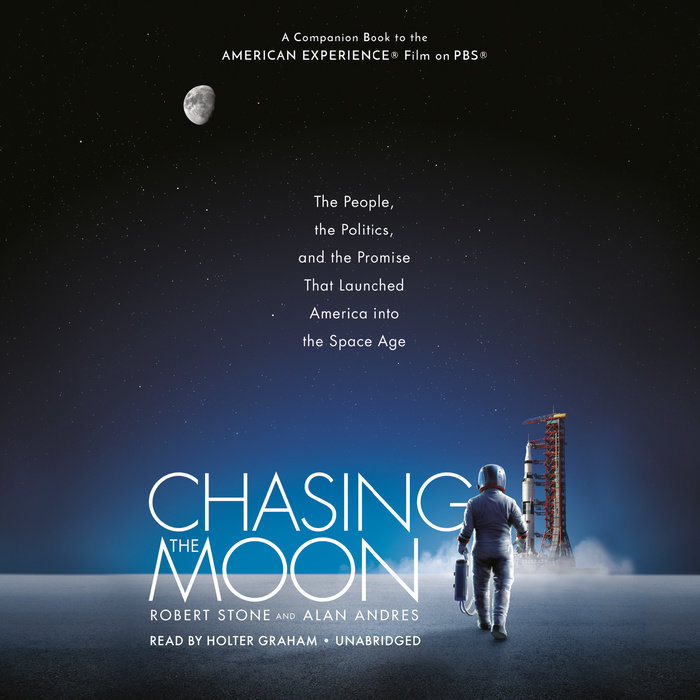 A Companion Book to the AMERICAN EXPERIENCE® Film on PBS®

Going in depth to explore their stories beyond the PBS series, writer/producer Robert Stone—called “one of our most important documentary filmmakers” by Entertainment Weekly—brings these important figures to brilliant life.

In 1961, President John F. Kennedy proposed the nation spend twenty billion dollars to land a man on the Moon before the end of the decade. Based on eyewitness accounts and newly discovered archival material, Chasing the Moon reveals for the first time the unknown stories of the fascinating individuals whose imaginative work across several decades culminated in America’s momentous achievement. More than a story of engineers and astronauts, the moon landing—now celebrating its fiftieth anniversary—grew out of the dreams of science fiction writers, filmmakers, military geniuses, and rule-breaking scientists. They include

• Science fiction author Arthur C. Clarke, whose writing inspired some of the key players in the Moon race. A scientific paper he wrote in his twenties led to the U.S. beating Russia in one area of space: communications satellites.
• Wernher von Braun, the former Nazi military genius who oversaw Hitler's rocket weapons program. After working on ballistic missiles for the U.S. Army, he was recruited by NASA to manage the creation of the Saturn V moon rocket.
• Astronaut Frank Borman, commander of the first mission to circumnavigate the Moon, whose powerful testimony before Congress in 1967 decisively saved the U.S. lunar program from being cancelled.
• Poppy Northcutt, a young mathematician who was the first woman to work in Mission Control. Her media exposure as a unique presence in this all-male world allowed her the freedom to stand up for equal rights for women and minorities.
• Edward Dwight, an African American astronaut candidate, recruited at the urging of the Kennedy White House to further the administration’s civil rights agenda—but not everyone welcomed his inclusion.

Setting these key players in the political, social, and cultural climate of the time, Chasing the Moon focuses on the science and the history, but most important, the extraordinary individuals behind what was undoubtedly the greatest human achievement of the twentieth century.
Read More
“Chasing the Moon is rich, lively, and deeply human—a thriller of its own to parallel PBS’s American Experience series on the moon program.”—Richard Rhodes, Pulitzer Prize– and National Book Award–winning author of Energy: A Human History

“Chasing the Moon tells the story I've lived for most of my life. From my testing of the lunar module on Apollo 9 to my hopes for the future as we celebrate Apollo’s fiftieth anniversary, it’s all there, and told through the personal experiences of the people who lived it. Some of it familiar, some never told before, this is a very human account of a truly historic moment as humankind emerges into the larger cosmos.”—Russell “Rusty” Schweickart, astronaut, Apollo 9

“Designed to be a companion volume to a documentary film, Chasing the Moon is so informative and so entertaining that it can easily stand on its own as a popular history of the Space Race. Stone and Andres capture not only the Cold War rivalry and turmoil of the period, but its heady optimism.”—Joseph Kanon, New York Times bestselling author of The Good German

“Chasing the Moon is not only the story of America’s epic moon landing, but a brilliant, no-holds-barred investigation of the politics, technology, and ambitions behind it.”—Edward Jay Epstein, author of How America Lost Its Secrets

“It was one of the most amazing achievements in human history. And now we have a book worthy of the grand endeavor. Chasing the Moon sweeps us along from the first dreams of rocketry to the famed Apollo program, and a grand epic of discovery it is, filled with drama and detail, peopled with characters who dream big and drive themselves to the outer limits of their endurance. It’s a book that demonstrates the best of our twentieth-century selves, when passion and professionalism, both public and private, helped us to do the impossible.”—William Martin, New York Times bestselling author of Cape Cod and Bound for Gold

“If you think you know all that is important about the Apollo moon landings, you would be wrong. In Chasing the Moon, Robert Stone and Alan Andres offer scintillating stories both great and small. From the first serious thinking about space futures at the beginning of the twentieth century to the reflections on the meaning of Apollo, Stone and Andres make a most welcome contribution to documenting the efforts to reach the Moon.”—Roger D. Launius, former chief historian of NASA, author of The Smithsonian History of Space Exploration

“A fascinating and enjoyable read . . . Meticulously researched and definitively detailed, this book is a must-have for anyone who wants to understand why and how Apollo happened.”—James Burke, former BBC-TV science correspondent, author of Connections
Read More

Celebrate Space Exploration on the 50th Anniversary of the Apollo 11 Moon Landing!Books on Screen: Summer 2019