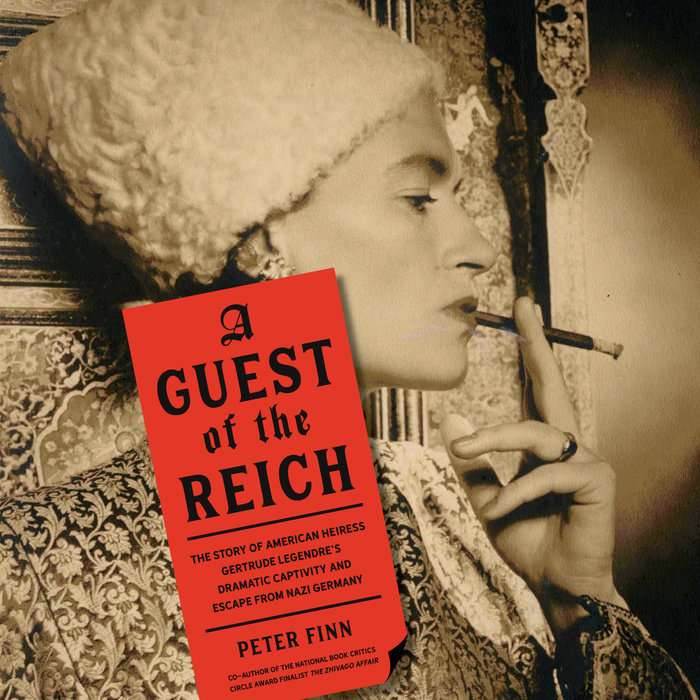 The dramatic story of a South Carolina heiress who joined the OSS and became the first American woman in uniform taken prisoner on the Western front—until her escape from Nazi Germany.

Gertrude “Gertie” Legendre was a big-game hunter from a wealthy industrial family who lived a charmed life in Jazz Age America. Her adventurous spirit made her the inspiration for the Broadway play Holiday, which became a film starring Katharine Hepburn. When the Japanese attacked Pearl Harbor, Legendre, by then married and a mother of two, joined the OSS, the wartime spy organization that preceded the CIA. First in Washington and then in London, some of the most closely-held United States government secrets passed through her hands. In A Guest of the Reich, Peter Finn tells the gripping story of how in 1944, while on leave in liberated Paris, Legendre was captured by the Germans after accidentally crossing the front lines.

Subjected to repeated interrogations, including by the Gestapo, Legendre entered a daring game of lies with her captors. The Nazis treated her as a “special prisoner” of the SS and moved her from city to city throughout Germany, where she witnessed the collapse of Hitler’s Reich as no other American did. After six months in captivity, Legendre escaped into Switzerland.

A Guest of the Reich is a propulsive account of a little-known chapter in the history of World War II, as well as a fascinating portrait of an extraordinary woman.
Read More
“Gripping . . . As well-paced and exciting to read as a good thriller.”
—Moira Hodgson, The Wall Street Journal

“The life of a young woman named Gertrude 'Gertie' Legendre was so exotic that it sounds like the plot of a stage play or a motion picture . . . Her saga is like no other.”
—Jonathan Kirsch, The Washington Post

“A vivid chronicle of the waning days of Nazi Germany, when a country answered for its own hubris and one American woman witnessed the nightmare.”
—Mary Ann Gwinn, Minneapolis Star Tribune

“I read A Guest of the Reich breathlessly, and found myself amazed by the pluck, guts, and courage of Gertrude Legendre . . . Her life was one enormous adventure.”
—Lisa Birnbach, author of True Prep

“Thrilling! A Guest of the Reich is an intimate spy story, as though a dear friend is taking us along on her misadventure behind Nazi lines.”
—Bill Dedman, author of Empty Mansions: The Mysterious Life of Huguette Clark and the Spending of a Great American Fortune

“Beautifully paced . . . An entertaining picture of a remarkable woman . . . Finn’s own writing shines in his description of pre-war American high society.”
—The Economist

“Gertrude Legendre was anything but the average rich society hostess; she possessed an unquenchable desire for adventure . . . [A] riveting account of a little-known historical personality.”
—Library Journal

“[A] biographical adventure story . . . Legendre's life makes for a captivating historical yarn and a unique addition to the cultural history of World War II.”
—Booklist

“Legendre was an extraordinary woman, whose 'journey through Hitler's collapsing Reich' will appeal to anyone equally enamored of glamor and wartime adventure.”
—Publishers Weekly

“An intrepid American heiress, already a world traveler and big-game hunter, tumbles into World War II, ending up a prisoner of the Gestapo as the Nazi regime begins to collapse. This is a true adventure story, a story of spirit and courage told wonderfully well.”
—Kate Alcott, author of The Dressmaker

“Gertrude Legendre was a glamorous New York socialite, a world-class adventurer, and a crack shot with a rifle . . . With thorough research and skillful writing Peter Finn brings to life her dramatic story. It’s better than anything Hollywood could invent.”
—Douglas Waller, author of Wild Bill Donovan: The Spymaster Who Created the OSS and Modern American Espionage