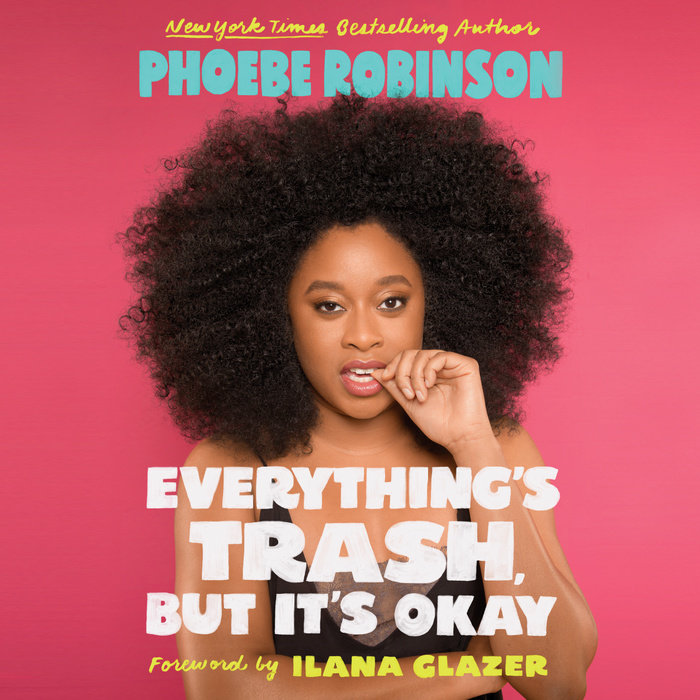 New York Times bestselling author and star of 2 Dope Queens Phoebe Robinson is back with a new, hilarious, and timely essay collection on gender, race, dating, and the dumpster fire that is our world.

Wouldn't it be great if life came with instructions? Of course, but like access to Michael B. Jordan's house, none of us are getting any. Thankfully, Phoebe Robinson is ready to share everything she has experienced to prove that if you can laugh at her topsy-turvy life, you can laugh at your own.

Written in her trademark unfiltered and witty style, Robinson's latest collection is a call to arms. Outfitted with on-point pop culture references, these essays tackle a wide range of topics: giving feminism a tough-love talk on intersectionality, telling society's beauty standards to kick rocks, and calling foul on our culture's obsession with work. Robinson also gets personal, exploring money problems she's hidden from her parents, how dating is mainly a warmed-over bowl of hot mess, and definitely most important, meeting Bono not once, but twice. She's struggled with being a woman with a political mind and a woman with an ever-changing jeans size. She knows about trash because she sees it every day--and because she's seen roughly one hundred thousand hours of reality TV and zero hours of Schindler's List.

“Phoebe Robinson brings her infectious charm and utterly delightful sense of humor to her second essay collection, Everything’s Trash, But It’s Okay. From body image to contemporary feminism to our culture of overwork, Robinson offers deft cultural criticism and hilarious personal anecdotes that will make readers laugh, cringe, and cry. Everything may indeed be trash but writing like this reminds us that we’re gonna make it through all the terrible things with honesty, laughter, and faith.”
—Roxane Gay, New York Times bestselling author

“[Everything’s Trash, But It’s Okay] is an irresistible mash-up of stream-of-consciousness venting and measured appraisals of everything from white feminism to Bono.”
—Natalie Kitroeff, The New York Times

“[Robinson’s] like your own approachably honest bestie — the kind you’d want riding shotgun on a cross-country road trip so that her sneakily incisive tangents could stretch and weave like so many highway miles… Even when she gets serious, doling out hard-won insights about money, body shaming or the challenges interracial couples face, Robinson keeps her wits about her.”
—Washington Post

"Robinson is like the Nora Ephron of the selfie generation."
—PureWow

“New York Times bestselling author Phoebe Robinson is out to inspire the entirety of the female population with this new collection of essays. Pushing women to take action instead of sitting on the sidelines, Robinson tackles topics of feminism, insane beauty standards, our culture's work ethic, and more....Told with confidence and light, this memoir is a go-to read for the modern woman.”
—PopSugar

“Her writing is insightful, free of pretense and full of humor. In an array of mediums, she combines an ability to laugh about some of her personal experiences and a willingness to learn from them all, so we can, too.”
—Forbes.com

"Robinson spins stories that are laugh-out-loud funny yet carry an unmistakable undertone of seriousness regarding sexism and race relations.... [Her] side-splitting memoir will both entertain and empower her readers."
—Publishers Weekly

"Phoebe Robinson's particular set of skills as a humorist is on full display in her second book. Educate yourself."
—Essence

“If book reviews could be written by text message, this one would be 10 cry-laughing emojis followed by 20 fire emojis. Robinson is an informed and adept cultural critic. . . . A hilarious and enlightening examination of race, gender and culture from comedian and podcast host Phoebe Robinson.”
—Shelf Awareness (starred review)

“Just when it feels like the world is falling irreparably apart, Phoebe Robinson is here to make things better. Whether she is unpacking the state of feminism or taking you through the dystopian world of online dating, she is manages to be on point, original, and laugh out loud funny. This vital, unflinching essay collection simultaneously calls out all the bullshit, especially facing women, while making you feel like things are *actually* okay. Even brighter than before, thanks to this hilarious bighearted book.”
—Gabrielle Union, New York Times bestselling author of We’re Going to Need More Wine

“Delightfully recreates the experience of listening to Phoebe dish in person with the added bonus of getting see how words like ‘relaysh’ are spelled!”
—Chris Hayes, New York Times bestselling author of A Colony in a Nation

“This collection is full of whip-smart commentary and extremely relatable trashiness. Phoebe has her own style, her own voice, and practically her own language that gets me every time. She has a way of making us all feel less alone and more bold. I dare you not to laugh your way through this book.”
—Abbi Jacobson, author of I Might Regret This

“Phoebe is brutally honest and hilarious. I proudly blurb this book without hesitation or remuneration!”
—Judd Apatow

“Current events and women's issues humorously tackled by a successful and prolific [comedian]....Readers who enjoy her podcast and loved her first book will find even more to appreciate here.”
—Kirkus Reviews

"As in her first book, Robinson maintains a baseline of free-associating, footnoting, list-making hilarity, which both disarms and readies readers for the tougher truths she tackles."
—Booklist
Read More

Don’t Miss Any of the Summer’s Books That PlayStroll or Sprint: Audiobooks for Every SpeedAmplify Laughter: Humor Essays by Black AuthorsSee More