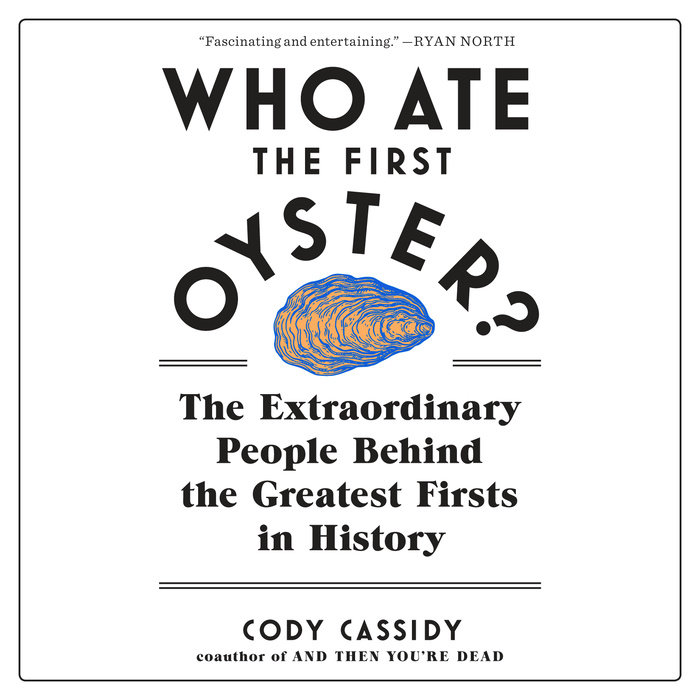 Written by: Cody Cassidy
Read by: Dennis Boutsikaris
4 Hours and 56 Minutes Imprint: Penguin Audio Genre: History - Civilization Release Date: May 05, 2020
Who wore the first pants? Who painted the first masterpiece? Who first rode the horse? Who invented soap? This madcap adventure across ancient history uses everything from modern genetics to archaeology to uncover the geniuses behind these and other world-changing innovations.

In this book, writer Cody Cassidy digs deep into the latest research to uncover the untold stories of some of these incredible innovators (or participants in lucky accidents). With a sharp sense of humor and boundless enthusiasm for the wonders of our ancient ancestors, Who Ate the First Oyster? profiles the perpetrators of the greatest firsts and catastrophes of prehistory, using the lives of individuals to provide a glimpse into ancient cultures, show how and why these critical developments occurred, and educate us on a period of time that until recently we've known almost nothing about.
Read More
Praise for Who Ate the First Oyster?

“[Cassidy] takes readers on a rapid-fire pop-science tour of historic discoveries and inventions . . . Making history fun is often a challenge, and here Cassidy succeeds. I read this book in one quick sip and imagine it to be a perfect gift book for young and old adults. . . . This casual but thoughtful tour through time is a great way to travel, particularly now, when we’re all stuck at home.”
—San Francisco Chronicle

“Cassidy tells the stories of individuals over the past thousands and even millions of years whose names will never be known, but whose innovations benefit us to this day.”
—New York Post

“A fun and enlightening quick trip through all the clever, stupid, dangerous, and gross human firsts that we've all wondered about.”
—Zach and Kelly Weinersmith, New York Times bestselling authors of Soonish: Ten Emerging Technologies That'll Improve and/or Ruin Everything

“In this fascinating and entertaining book, Cody Cassidy has done what might seem impossible: illustrating the identity, life, and death of some of the most momentous—and entirely anonymous—figures in human (and prehuman) history.”
—Ryan North, author of How To Invent Everything: A Survival Guide for the Stranded Time Traveler

“Illuminating and entertaining . . . Cassidy humanizes prehistory with wit and a firm grasp of the science behind these anthropological case studies. Enthralled readers will develop a new appreciation for the ancient past.”
—Publishers Weekly

“Cassidy embarks on a wide-ranging, far-flung journey of curiosity that easily engages the reader. Chapters are brimming with history that may surprise readers as well as compel them to further investigate.”
—Booklist

“A breezy read through millennia of human development.”
—Kirkus Reviews