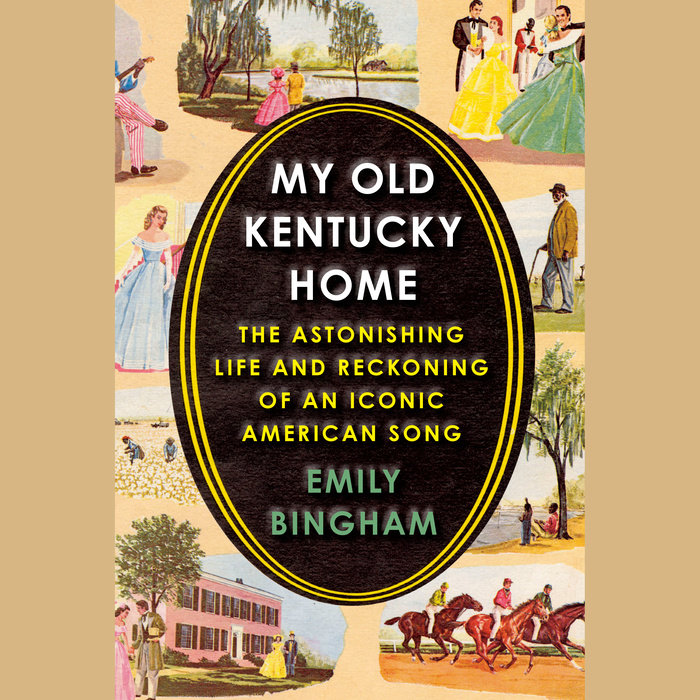 Written by: Emily Bingham
Read by: Emily Bingham
10 Hours and 39 Minutes Imprint: Random House Audio Genre: Social Science - Discrimination Release Date: May 03, 2022
The long journey of an American song, passed down from generation to generation, bridging a nation’s fraught disconnect between history and warped illusion, revealing the country's ever evolving self.

MY OLD KENTUCKY HOME, from its enormous success in the early 1850s, written by a white man, considered the father of American music, about a Black man being sold downriver, performed for decades by white men in blackface, and the song, an anthem of longing and pain, turned upside down and, over time, becoming a celebration of happy plantation life.

It is the state song of Kentucky, a song that has inhabited hearts and memories, and in perpetual reprise, stands outside time; sung each May, before every Kentucky Derby, since 1930.

Written by Stephen Foster nine years before the Civil War, “My Old Kentucky Home” made its way through the wartime years to its decades-long run as a national minstrel sensation for which it was written; from its reference in the pages of Margaret Mitchell’s Gone with the Wind to being sung on The Simpsons and Mad Men.

Originally called “Poor Uncle Tom, Good-Night!” and inspired by America’s most famous abolitionist novel, it was a lament by an enslaved man, sold by his "master," who must say goodbye to his beloved family and birthplace, with hints of the brutality to come: “The head must bow and the back will have to bend / Wherever the darky may go / A few more days, and the trouble all will end / In the field where the sugar-canes grow . . .”

In My Old Kentucky Home, Emily Bingham explores the long, strange journey of what has come to be seen by some as an American anthem, an integral part of our folklore, culture, customs, foundation, a living symbol of a “happy past.” But “My Old Kentucky Home” was never just a song. It was always a song about slavery with the real Kentucky home inhabited by the enslaved and shot through with violence, despair, and degradation.

Bingham explores the song’s history and permutations from its decades of performances across the continent, entering into the bloodstream of American life, through its twenty-first-century reassessment. It is a song that has been repeated and taught for almost two hundred years, a resonant changing emblem of America's original sin whose blood-drenched shadow hovers and haunts us still.
Read More
“People who love the song say there is . . . a kind of serenity, a sweet longing for something lost over the passing years, even if they cannot put into words what that something is. How this came to be, how the song so captured these people and a wider world, is the haunting question that the native Kentuckian Emily Bingham answers so thoroughly and forcefully in My Old Kentucky Home, her history of an American song . . . knowing its beginnings and long, tortured journey into a third century of painted-over suffering, [Bingham] reckoned that it did not belong to her, but to those wounded most by it; they should decide its future.”—Rick Bragg, The New York Times

“A powerful story of how, exactly, we fool ourselves into thinking the past is past . . . an account that is both riveting and thorough, taking us across a century of spinout marketing campaigns, protests and versions that emerged from Foster’s lyrics. Shirley Temple, Colonel Sanders, the country of Japan, Henrietta Vinton Davis, J.K. Lilly, Marian Anderson, Richard M. Nixon, the 31W Highway, “Mad Men”—and yes, the Kentucky Derby—are all summoned . . . Bingham’s research is finely detailed, extensive, complex. Further, her identity—and its many complications—is vital to her authority as a needed writer of this book.”—The Washington Post

“Beautifully written . . . deeply personal . . . riveting . . . Because [Bingham’s] personal and family experiences in so many ways parallel the song, this book can be characterized as a love letter — but one with tears in the eyes — to the commonwealth of Kentucky. The book also has a serious and important national reach.”—Courier Journal

“Thoughtful . . . intensely moral . . . [Bingham] covers a spectacular amount of ground, from the origins of the song before the Civil War up to the present day . . . Engrossing twists and turns come with every chapter.”—Chapter 16

“A beautiful book. I was taken aback by how the song and its history, and Foster’s own history, are so much a part of our ongoing story. Bingham’s writing is compelling, and humbling, and moving.”—Rosanne Cash, singer, songwriter, and author

“Bingham asks readers to think critically about a song cherished by many and to consider the price of nostalgia.”—Library Journal

“Emily Bingham has painstakingly created a history quilt out of the intricacies of the profound effects of a single song on American culture. The result is wonder and dismay—and a lesson for today in how propaganda works. The story is compelling because it is about us, all Americans. The song ties us together or divides us in ways that can make you shudder to know your part in it. And yet that seductive melody is there, drawing us along through our complicated history. Bingham doesn’t let us escape. We’re gripped by the story and enlightened by her telling. She delves into some of the deepest issues America has ever faced, issues that are still unresolved. This book is not simply about lyrics of a song but how that song has been used to tell a lie.”—Bobbie Ann Mason, author of In Country and Dear Ann

“One song, in Emily Bingham’s brilliant hands, brings history and memory together in ways all Americans must confront if we are ever truly to hear one another.”—Timothy Tyson, author of the New York Times bestseller The Blood of Emmett Till
Read More

On the Podcast: AJ Jacobs, Emily Bingham, and Jazmyn Simon