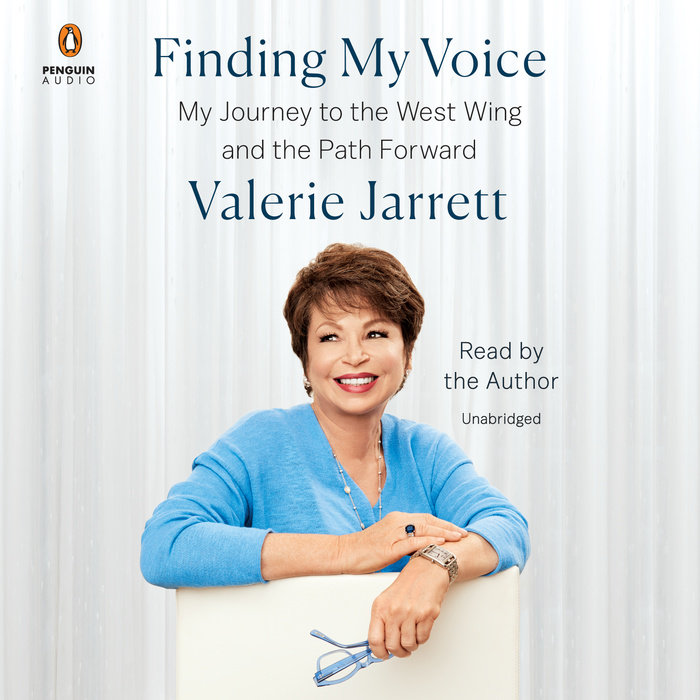 "Valerie has been one of Barack and my closest confidantes for decades... the world would feel a lot better if there were more people like Valerie blazing the trail for the rest of us."--Michelle Obama

"The ultimate Obama insider" (The New York Times) and longest-serving senior advisor in the Obama White House shares her journey as a daughter, mother, lawyer, business leader, public servant, and leader in government at a historic moment in American history.

When Valerie Jarrett interviewed a promising young lawyer named Michelle Robinson in July 1991 for a job in Chicago city government, neither knew that it was the first step on a path that would end in the White House. Jarrett soon became Michelle and Barack Obama's trusted personal adviser and family confidante; in the White House, she was known as the one who "got" him and helped him engage his public life. Jarrett joined the White House team on January 20, 2009 and departed with the First Family on January 20, 2017, and she was in the room--in the Oval Office, on Air Force One, and everywhere else--when it all happened. No one has as intimate a view of the Obama Years, nor one that reaches back as many decades, as Jarrett shares in Finding My Voice.

Born in Iran (where her father, a doctor, sought a better job than he could find in segregated America), Jarrett grew up in Chicago in the 60s as racial and gender barriers were being challenged. A single mother stagnating in corporate law, she found her voice in Harold Washington's historic administration, where she began a remarkable journey, ultimately becoming one of the most visible and influential African-American women of the twenty-first century.

From her work ensuring equality for women and girls, advancing civil rights, reforming our criminal justice system, and improving the lives of working families, to the real stories behind some of the most stirring moments of the Obama presidency, Jarrett shares her forthright, optimistic perspective on the importance of leadership and the responsibilities of citizenship in the twenty-first century, inspiring readers to lift their own voices.
Read More
"A stirring volume illuminating the power of intelligence and grace...Jarrett narrates her journey from Iran, where she was born to American parents, to the West Wing, where she was one of President Obama's most trusted advisers."—O, The Oprah Magazine

"Jarrett had charted an ideal path for herself — “law school, work, marriage, baby, bliss.” Then her marriage … imploded. She was a single mom and a miserable, mediocre associate at a law firm. The separation and subsequent soul searching prompted her to leave the firm and climb into Chicago politics. The rest was history… Jarrett’s early struggles relay a … life lesson. Her early, mistaken view was that “it was somehow a sign of strength if I had the self-control to never waver from my intended course.”—The New York Times

"[Jarrett] shares the stories you're dying to hear about what it's like to advise (and just hang out with) former President Barack Obama."—Bustle

"Rather than a tell-all that spills salacious secrets, the book is more of a guide that Jarrett hopes will connect with a younger generation...Though large sections are dedicated to her White House years, there’s much more to Jarrett’s story...Throughout, she laces the anecdotes with reflections of what she wishes she knew at the time."—The Chicago Tribune

"Jarrett shares her road from Chicago to the White House...Jarrett is modest and engaging, someone who does not seek nor relish confrontation nor celebration...But for the moment, she is briefly stepping out into the spotlight."—The Los Angeles Times

"Revisiting her illustrious career, from inner-city Chicago to the White House and beyond, Jarrett reveals the life-changing events that, though perilous at the time, enabled her to become a virtuoso corporate and philanthropic leader, and a valued presidential adviser."—Booklist

"An insightful addition to a growing shelf of books by insiders from the Obama administration."—Kirkus Reviews
Read More