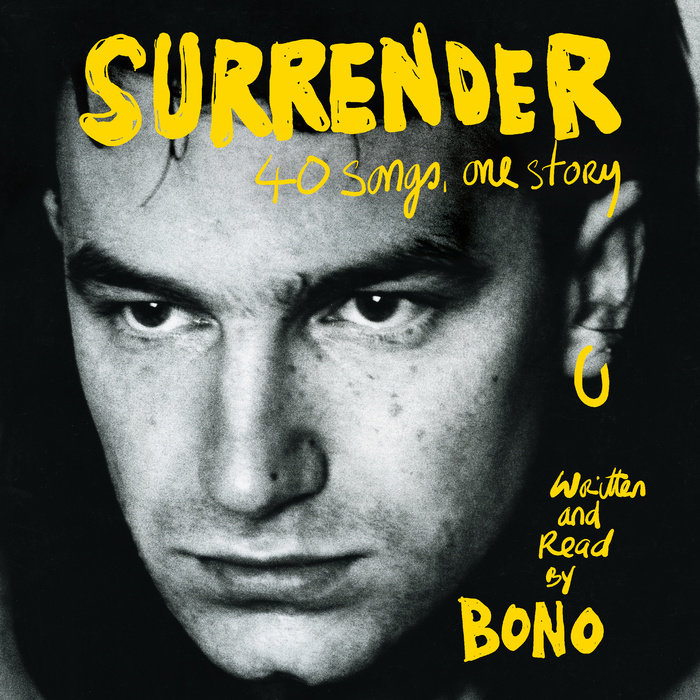 Written by: Bono
Read by: Bono
20 Hours and 26 Minutes Imprint: Random House Audio Genre: Biography & Autobiography - Personal Memoirs Release Date: November 01, 2022
Bono—artist, activist, and the lead singer of Irish rock band U2—has written a memoir: honest and irreverent, intimate and profound, Surrender is the story of the remarkable life he’s lived, the challenges he’s faced, and the friends and family who have shaped and sustained him.

Narrated by the author, Surrender is an intimate, immersive listening experience, telling stories from Bono’s early days in Dublin, to joining a band and playing sold out stadiums around the world with U2, plus his more than 20 years of activism.

Throughout a remarkable life, music has always been a constant for Bono and in the audiobook, his distinctive voice is interwoven with a very personal soundtrack adding atmosphere and texture to each and every scene. From moments of classic U2 hits to snippets by The Clash, Patti Smith, Verdi, Johnny Cash and Mozart, Surrender also exclusively features clips of newly recorded reimagined versions of U2 songs including ‘Sunday Bloody Sunday’, ‘With Or Without You’, ‘One’, ‘Beautiful Day’ and more, glimpsed for the first time on Surrender: 40 Songs, One Story.
Read More
A VOGUE BEST BOOK OF THE YEAR

“Honest and direct . . . [Surrender] is defined largely by humility. This is an introspective story written by a man whose spirit is never far removed from the sadness and grief of his childhood; the hunger, literal and figurative, of a teen wannabe rocker; and the gratitude of one who worked his butt off and made it to the top . . . This is the rare rock star memoir written by a rock star who, you get the impression, could have been a writer . . . Bono has a gift for making even the unattainable seem relatable . . . He’s humble, even self-effacing. He might be fun to have a beer with. He is very much of this Earth, even if on occasion he might seem to float above the water.” —The L.A. Times

“Compelling . . . Surrender is more introspective than salacious or score-settling, and proof that the tunesmith who wrote it also speaks fluent prose.” —The Washington Post

“Surrender soars whenever the spotlight comes on. Bono is never more powerful, on the page or the stage, than when he strives for the transcendence that only music can offer . . . [Bono] is open and honest, with language that can be witty and distinctive, addressing his competitive relationship with his father or growing up against the backdrop of Ireland’s political violence.” —The New York Times

“This is Bono at his best: thoughtful, reflective, revealing a wisdom that his rock-star persona covers up . . . At the root of it all you don't doubt his decency or integrity.” ―The Times (UK)

“A rattling good yarn . . . characteristically expansive, but it whizzes by  . . . Bono has storytelling verve and a genuine desire for self-examination and is enthusiastic about praising others, often at his own expense . . . [A] generous, energetic book.” ―The Guardian (UK)

“Bono's memoir bares his soul . . . Has any rock superstar written a more revealing biography? He deftly balances the comical and profound and packs anecdotes with cameos by the rich and famous, from Frank Sinatra to Pope John Paul II.” ―Daily Telegraph (UK)

“Beautifully evoked, a mixture of Joycean exuberance and Chandleresque irony . . . most revealing are the intimate personal experiences that shaped him and his chaotic creative process. Punctuating it all is the music. Each chapter uses a U2 song to pull us down memory lane.” ―The Sunday Times (UK)

“Bono's honesty will win over his harshest critics . . . the U2 frontman's memoir is a triumph . . . Honest, witty, informative and beautifully written. Surrender will surely join the ranks of the great rock memoirs.” ―Irish Independent (UK)

“Sometimes confessional, many times humorous, and always clever and entertaining, Bono has delivered a fascinating autobiography of a major force in popular music and world affairs for all readers.” —Library Journal [starred review]

“Bono's first book will generate enormous interest . . . That the singer-songwriter writes well for the page should not come as a surprise, but his drawings might. Fans of Bono and U2 will adore this rich and expansive memoir, while music lovers of all persuasions will find much to enjoy here, too.” —Booklist [starred review]

“A powerful and candid debut memoir . . . With remarkable frankness, he details what makes a great song; domestic life with his wife, Ali, and their four children; how the band almost fell apart during the 1990 recording of Achtung Baby; why he always wears glasses; and his experience of the conflict between unionists and nationalists in Northern Ireland . . . Self-aware and poignantly reflective, this is a must-read.” —Publishers Weekly [starred review]
Read More