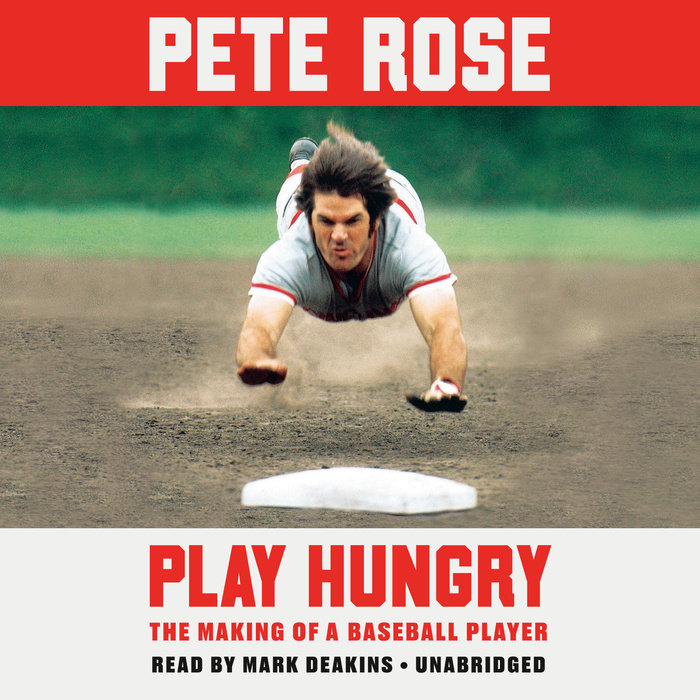 Pete Rose was a legend on the field. As baseball’s Hit King, he shattered records that were thought to be unbreakable. And during the 1970s, he was the leader of the Big Red Machine, the Cincinnati Reds team that dominated the game. But he’s also the greatest player who may never enter the Hall of Fame because of his lifetime ban from the sport. Perhaps no other ballplayer’s story is so representative of the triumphs and tragedies of our national pastime.

In Play Hungry, Rose tells us the story of how, through hard work and sheer will, he became one of the unlikeliest stars of the game. Guided by the dad he idolized, a local sports hero, Pete learned to play hard and always focus on winning. But even with his dad’s guidance, Pete was cut from his team as a teenager—he wasn’t a natural. Rose was determined, though, and never would be satisfied with anything less than success. His relentless hustle and headfirst style would help him overcome his limitations, leading him to one of the most exciting and brash careers in the history of the sport.

Play Hungry is Pete Rose’s love letter to the game, and an unvarnished story of life on the diamond. One of the icons of a golden age in baseball, he describes just what it was like to hit (or try to hit) a Bob Gibson fastball or a Gaylord Perry spitball, what happened in that infamous collision at home plate during the 1970 All-Star Game, and what it felt like to topple Ty Cobb’s hit record. And he speaks to how he let down his fans, his teammates, and the memory of his dad when he gambled on baseball, breaking the rules of a sport that he loved more than anything else. Told with candor and wry humor—including tales he’s never told before—Rose’s memoir is his final word on the glories and controversies of his life, and, ultimately, a master class in how to succeed when the odds are stacked against you.
Read More
“An eloquent plea for reinstatement . . . [Rose] is expressive about the sport he loves and about the father who raised him to strive to win. . . There's an authentic Huck Finn-ish charm to these passages. Baseball was not the slick slugfest of today. Players bore colorful nicknames, played day games, and they played hurt. It was a game of knockdowns and spitballs . . .  Play Hungry testifies to the dividends paid by desire, not just to Mr. Rose but to the teammates that he inspired with the will to win . . . the sport misses the authenticity of his voice, and the Hall of Fame--barred to him on account of his banishment--can hardly be complete absent such an immense talent. After 30 years, baseball should think about bringing him home." —Wall Street Journal

“The title says it all. This is how a hungry kid became one of the greatest ball players of all time. Essential reading for baseball fans, controversy and all.” —Booklist, starred review

“A bitingly candid reflection on his life in baseball . . . he’s witty and brash, but he also displays unexpected earnestness . . . With this frank, no-holds-barred narrative, Rose just might win new fans.” —Publishers Weekly

“[Rose’s] recollections about baseball—and life off the field—yield rewards for readers. In a baseball memoir filled with plenty of strikes and balls, Rose offers abundant evidence of why he has become a touchstone of controversy.” —Kirkus Reviews
Read More