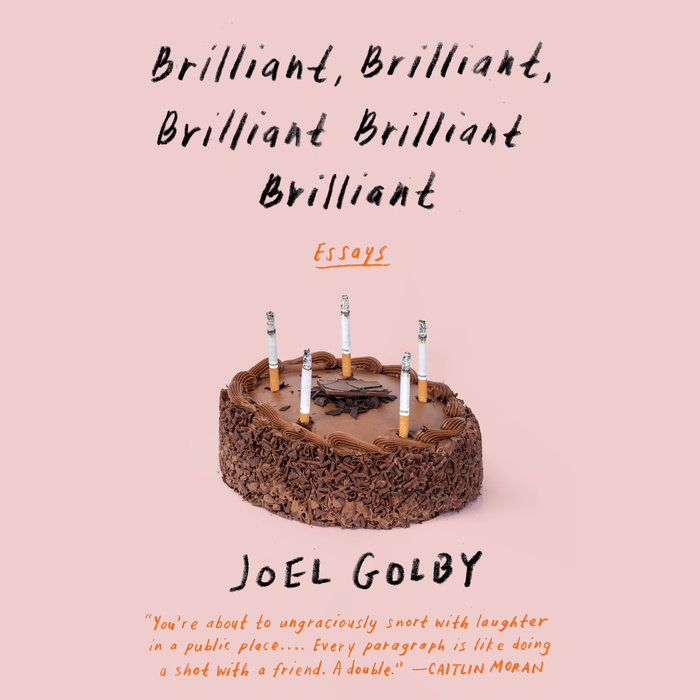 "This is a funny and beautiful book. What a little bastard." --Russell Brand
"Every paragraph is like doing a shot with a friend. A double." --Caitlin Moran

Joel Golby's writing for Vice and The Guardian, with its wry observation and naked self-reflection, has brought him a wide and devoted following. Now, in his first book, he presents a blistering collection of new and newly expanded essays--including the achingly funny viral hit "Things You Only Know When Both Your Parents Are Dead." In these pages, he travels to Saudi Arabia, where he acts as a perplexed bystander at a camel pageant; offers a survival guide for the modern dinner party (i.e. how to tactfully escape at the first sign of an adult board game); and gets pitted head-to-head, again and again, with an unpredictable, unpitying subspecies of Londoner: the landlord.

Through it all, he shows that no matter how cruel the misfortune, how absurd the circumstance, there's always the soft punch of a lesson tucked within. This is a book for anyone who overshares, overthinks, has ever felt lost or confused--and who wants to have a good laugh about it.
Read More
*A BBC Best Book of 2019 So Far*

“Seeing the byline ‘Joel Golby’ means you’re about to ungraciously snort with laughter in a public place. Golby is sharper at dissecting the madness of 21st century online existence than any other writer. Every paragraph is like doing a shot with a friend. A double.”
—Caitlin Moran, New York Times bestselling author of How to Be a Woman and How to Be Famous

“This is a funny and beautiful book. What a little bastard.”
—Russell Brand, New York Times bestselling author of My Booky Wook and Recovery

“Joel Golby is my favorite pop culture–obsessed nihilist...You’ll laugh, cry and probably be a bit weirded out.”
—Sharon Horgan, co-creator of Catastrophe

“Using a blend of insightful self-deprecation and almost lovable braggadocio, Golby tackles subjects big and small with the same forensic thinking and enthusiasm… [He] is great at switching between the poignant and the absurd, observing life both with the wonder of a toddler who has just discovered where you hid the crayons and the confidence of the friend who tells you ‘I got this’ before attempting to fix your vacuum cleaner.”
—Adam Kay, The Guardian

“A writer who can be funny and offhandedly profound at the same time…[Golby] sometimes feels like a kindred spirit to David Sedaris, but younger and more biting.”
—Kirkus Reviews

“Golby, a British staff writer for Vice, moves between dark wit and even darker emotion, often in the course of a single sentence…Consistently entertaining.”
—Booklist

“With Golby we’re treated to two things at once: the pleasure of his wit and style as he ranges his themes, and a sustained, near-Swiftian satire on the very real and material challenges driven by the United Kingdom’s housing crisis…That Golby spins comedy gold from such a sorry state of affairs is testimony to how much we need a voice like his.”
—LA Review of Books

"A millennial's answer to David Sedaris. No writer is funnier than Joel Golby."
—Dolly Alderton, author of Everything I Know About Love